Back to basics: 10 English words for flying 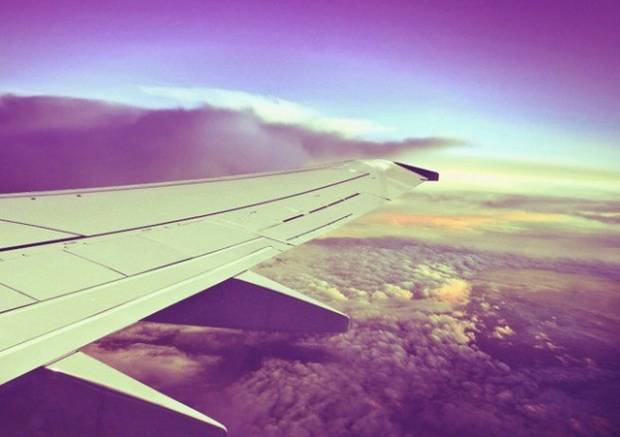 What’s more exciting than stepping into the airport, luggage in hand, ready to catch a flight? For many travelers, foreign exchange students, and language learners, nothing is! With so many people coming and going around the world, airports make for very busy places. Whether taking a domestic or international flight, there’s a lot of vocabulary to process at the airport. Here are ten words and phrases you’ll need.

When you arrive at the airport, look for the big screen that lists the desk numbers where different airlines (companies) check in passengers. At the appropriate desk, an airline staff member will ask you for identification and register you as a traveler for that flight. These days, it’s often possible to check in online before arriving at the airport, which saves loads of time.

Remember: “Check in” is an inseparable phrasal verb, meaning you can’t separate “check” from “in.” (For example, the sentence “I checked in online” is correct and “I checked online in” is not.)

When you check in, you’ll receive your boarding pass. This super important document (seriously, don’t lose it!) shows the details of your flight, including your flight number, seat, and gate. These days you can often print your own boarding passes or even get them on your (smart) phone.

Remember: “Boarding pass” is a compound noun, meaning it’s made up of two words. The verb “to board” literally means to enter the plane.

If you’re traveling internationally, you’ll go through security before departure and clear customs after arrival. At security you’ll walk through a metal detector while airport staff X-ray your luggage to check for any prohibited items. They might also swipe your clothing to test for explosive substances. In terms of customs, it’s important to remember that some countries (such as Australia and Chile) have strict limits on what you can and can’t bring with you when you travel there. Because of this, you need to declare (officially state) the contents of your luggage on an arrival or departure card at customs (the flight attendants usually give these to you).

Remember: “Customs” is a noun. You can now add “arrival/departure card,” “prohibited items,” “X-ray,” “metal detector,” and the verb “to declare” to your vocabulary.

Your gate is the place where your flight leaves from (but you probably already knew that). Remember to keep checking the electronic boards at the airport – sometimes your gate changes last minute. Don’t want to miss your flight? Get to your gate early.

Remember: Look carefully at your sentence to see if “take off” is being used as a noun or verb. For example: “I always close my eyes during take off – it makes me nervous.” (Noun) “We’re going to take off in five minutes.” (Verb) “Landing” is a bit clearer, as its verb is “to land” (not “to landing!”) Example: “Please remain seated during landing.” (Noun) “Are we going to land soon?” (Verb)

This piece of equipment keeps you in your seat during the flight. (We also see seatbelts in cars, taxis, and long-distance buses, of course). During take off and landing, you must have your seatbelt fastened close to your body, sometimes also during the flight (especially if there’s any turbulence).

Remember: You can use other synonyms for the verb “to fasten”. Try using “to buckle/unbuckle,” or “to put on/take off” your seatbelt.

When it’s time to eat, you’ll put your food on your “tray table.” These are small tables similar in size to the trays waiters use in restaurants, hence the funny name. You can find yours on the back of the seat in front of you.

Remember: During take off and landing, you’ll need “to stow” your tray table. This is a synonym for “to put away”.

Flight attendants are the men and women who work on the plane and help you during the flight. They’ll demonstrate safety procedures, bring food, and answer questions while flying.

Remember: If you want to talk to a flight attendant, press the button located on your armrest or catch them as they pass. Want extra good service? Be extra nice to them (they have a pretty exhausting job, after all!)!

Remember: The “cabin” is the part of the plane where passengers sit. “Cabin pressure” is another compound noun.

If you’re traveling internationally or long distance, you’ll likely see a screen in front of your seat. If you do: great news! You’ll be able to watch movies, TV series, or play games while flying. To begin, use the remote control located in your armrest, or touch the screen. (10+ hours of back-to-back movies, here we come!)

Tags: Language learning, English, Vocabulary, Flying
Learn English with usLearn More
Get the latest on travel, languages and culture in the GO newsletterSign me up