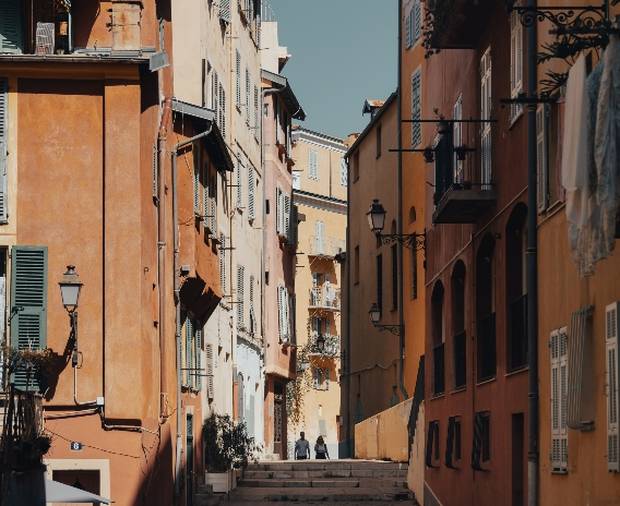 Whether you love food, art, beaches or architecture, Nice, the UNESCO heritage capital of the French Riviera is a vibrant city that will sweep you up in its charm. With its dazzling Promenade des Anglais straddling the rocky beach and colorful city, it’s long been a tourist haven, especially over the summer months. So if you want to experience Nice like a local, check out these 10 hidden gems.

Niçoise cuisine is a mix of rich Mediterranean flavors and fresh local vegetables. The best example is the beloved local sandwich: The Pan Bagnat. The recipe includes crispy country bread soaked with olive oil then loaded with raw vegetables, anchovies, olives, slices of hard-boiled egg, chunks of tuna and salt and pepper. You can pick one up at most cafés, although Chez TinTin is regularly voted as one of the best in Nice.

With a spectacular 360° panoramic view over the city of Nice and the surrounding hills, the rooftop at the tip of the Monsigny Hotel is the place to be in summer.

Chill out in a deck chair while you listen to live music, or unwind in the jacuzzi. Order a plate of charcuterie and French cheese and embrace la vie Française.

During summer, the open-air Théâtre de Verdure comes to life, hosting jazz, pop and rock concerts under the stars. Surrounded by pines, palm trees and the sound of the sea, since 1945 this historic amphitheater has hosted everyone from Edith Piaf to The Clash and promises an unforgettable night out.

The leafy Colline du Château park offers a different perspective of Nice, far from the crowded streets of the old town. Climb the stone steps, or ride the free lift if you’re feeling lazy, and marvel as a panoramic view over the bay, the old town and the surrounding hills unfolds in front of you. The view is most impressive in the evening as the city lights up and the sun drops behind the horizon.

When workers were constructing a new tram line in 2004, they discovered fragments of an old medieval city. The subterranean city was eventually dug up to reveal medieval artifacts from the 11th century through to the 17th century. Book tickets in advance to take a guided tour (a good chance to practice your French) through this pretty impressive piece of history lying just below modern day Nice.

Escape the crowds, expensive beach clubs, hawkers and loud speedboats by heading to Coco Beach. This small, secluded bay beach is loved by locals and offers great spots for snorkeling and rock jumping. While it doesn’t have any sandy shores, its turquoise water and flat rocks are all you need to enjoy a peaceful break in the sunshine. It’s just a short walk from the port and the Coco Beach restaurant is a lovely spot to dine on daily caught fresh fish for lunch.

7. Listen out for the midday cannon

Don’t be alarmed if you hear a loud boom at midday. It’s just the Nice midday cannon. A 125-year tradition, locals are so used to the noise they don’t even bat an eyelid. Legend has it the Scottish Lord Sir Thomas Coventry grew impatient waiting for his wife to return from gossiping and shopping in town for lunch, so he persuaded council to have a cannon fired, every day, at noon to let her know it was high time she came home. Today, the cannon has been replaced with a firework, but its boom is still a recognizable Nice icon.

You’d be forgiven for walking past and thinking this monumental sculpture is just a cool piece of art. However, the imposing black cube balancing on a head in fact houses seven floors of library administration offices. While it can’t be visited by the public, it’s certainly a site worth visiting and snapping a selfie in front of.

The hills above the city are home to the prestigious Conservatoire de Nice, a music conservatory housed in an elegant residence built for Queen Victoria. The modern auditorium hosts weekly classical and modern concerts featuring students and visiting orchestras. Best of all, most of them are free of charge or just a couple of euros.

If you can find it, you’ve already won. Nice’s first speakeasy, The Old Sport Club recreates prohibition-era secrecy in its dimly-lit themed bar. Inside, expert bartenders serve up unique cocktails to suit your taste buds. They even run cocktail masterclasses, so you can learn to mix like the pros. Make a booking to get the address and secret entrance code.

Tags: Travel tips, Cities, French, France, Nice
Refine your French in NiceExplore
Get the latest on travel, languages and culture in the GO newsletterSign me up

Paris or Nice: Which city is more you?
By Livia · 5 min read
Nice in Nice: Know your way around French customs
By Isabelle · 3 min read
3 reasons why I learned French (and why you should too)
By Antonia · 3 min read
How to eat like the Japanese eat
By Emma · 4 min read
See more from