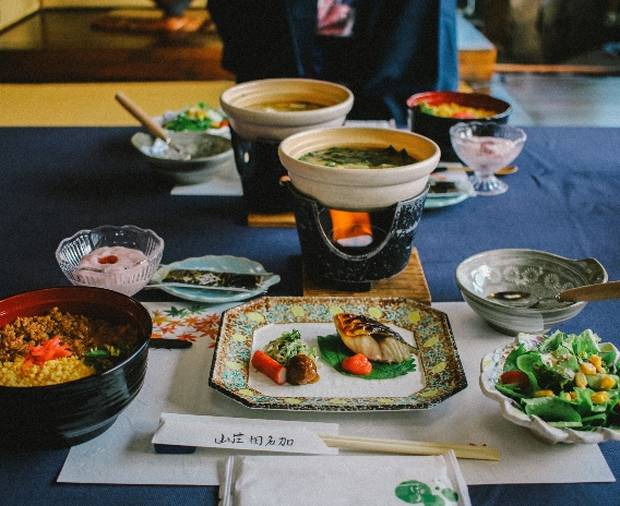 It is widely accepted that Japanese cuisine is not only absolutely delicious, but it is also really good for you. This is partly because of the top-notch ingredients that are used, but it’s also due to a super healthy attitude towards what they put in their bodies.

Scientists have looked at the traditional Japanese diet and suggest that if you spend a few weeks (or a lifetime) eating their usual dishes of fresh food, unprocessed goodies and the occasional fermented item, your body (and taste buds) will thank you. You don’t need to tell me twice... Pass the sashimi!

Before we tuck in, there are a few customs that it is useful to know when eating in Japan or dining with Japanese hosts. For example, you should never raise your food any higher than your mouth, and although you should use chopsticks to eat the solid pieces of food in a soup, you must never use them to stab your food. It is also impolite to leave them resting on the side of your bowl or plate – use a rest if one is provided, or the wrapper that they came in.

To really eat like the Japanese, you’ve also got to think like the Japanese. There’s a traditional saying, “Hara hachi bu”, which means that you should eat until you’re 80% full. Finally – you’ll no longer need to unbutton your jeans after a meal.

A traditional Japanese breakfast might include miso soup, steamed rice and dishes such as grilled fish, dried seaweed (nori), pickles, fermented soybeans (natto) and vegetables. You won’t find anything fried or too greasy, as these dishes are designed to be light and give you plenty of protein for your day.

Invest in a lunch box

The midday meal in Japan often consists of rice or noodle dishes such as ramen, soba and udon bowls. Many people will also take a boxed lunch, known as a bentō, to class or to work with them. In a bentō box, you might find rolled egg and rice omelets, rice balls wrapped in seaweed, boiled eggs marinated in soy sauce, meatball skewers, or a chicken curry. There’s also a fun custom of trying to make lunch food cute – like cutting up slices of apple into the shape of rabbit ears!

Dinner is the main meal of the day

Green tea is the go-to beverage, and will often be drunk alongside a meal. Matcha – a type of powdered green-tea that contains more caffeine – has become super popular even outside of Japan, and is packed full of antioxidants, which are great for a healthy heart.

There’s a strong emphasis on being connected with the changing seasons in Japanese culture, and eating ingredients that are in season at the time is a big part of the national diet. If you live in Japan for a while, expect to see the menus changing every few weeks to reflect what’s good at that time of year. Eating seasonally is also more environmentally-friendly, as it means less food items are shipped into the country from overseas when they are not ready to be harvested locally.

Japan is made up of over 6,000 islands, so it’s no surprise that there’s plenty of fresh fish on the menu. Fresh, raw fish is a staple part of sushi – a type of traditional Japanese cuisine consisting of cooked rice with vegetable, fish or seafood garnishes that has become internationally prized. Though meat dishes with beef and chicken can also be found, it’s fish and seafood that rule here.

Fermentation is the foundation of many of Japan’s classic dishes. Fermented foods are filled with beneficial microbes and nutrients that are fantastic for keeping your gut healthy, and your brain and body functioning well. Miso is a savory paste made from fermenting soybeans that is the base of the much-loved miso soup, and nattō is a dish of sticky, fermented soy beans. Japan is home to the most people in the world who have lived to over 100 years old, so they are clearly doing something right – don’t ignore the bowl of pickles at the table!

Tags: Culture, Japanese, Food, Japan
Discover Japan's cultureExplore
Get the latest on travel, languages and culture in the GO newsletterSign me up