10 things to eat in California 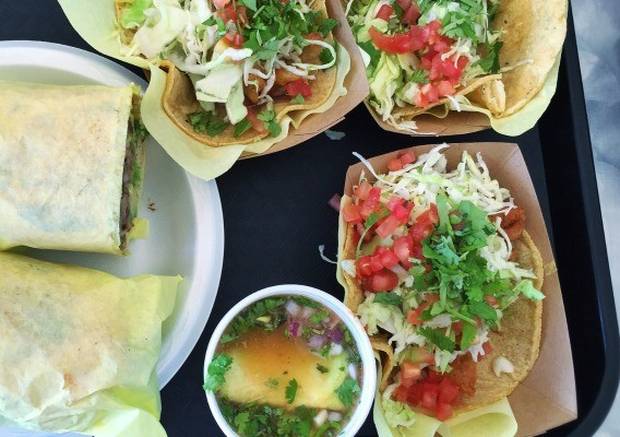 It seems that in California, almost any problem can be solved with a combination of avocados, yoga, and dogs: After all, food, health, and man’s best friend (or good company in general) are really all you need in life. Not a bad way to look at things, and let’s face it, we’re all a little jealous of the Golden State’s laid-back lifestyle.

Today, we’re going beyond the sunshine and furry friends to give the food the respect and attention it deserves: Get ready for mouth-watering and genius concoctions made of the best Mexican, American, and Asian flavors. Even though the menu here is numbered, it’s not a ranking, and you should definitely try everything (at least twice).

One of the great things about California is that you have so many cultures and nationalities colliding and merging on a day-to-day basis, and fortunately, this is oh so deliciously reflected in the state’s dishes: I present to you the Ramen Burrito. Just picture ramen noodles, eggs, steak and scallions coming together in tortilla-wrapped holy matrimony. #yum

Sticking to the ramen theme, picture the noodle as being reworked into buns; this masterpiece is very similar to Michaelangelo’s statue of David… only better! Simply put a great tasting meat patty with secret shoyu sauce between the noodle buns, and you’ve got yourself a worthy burger.

If you’re at all familiar with the wonderfully weird and eclectic culture that is found in San Francisco, then you will not be surprised to know that this is the birthplace of the Sushirrito, aka the ultimate sushi-burrito combo. After all, Californians love Asian and Mexican cuisine, so you can image the parade that ensued when this giant sushi roll was created as a way to combat the expensive sit-down sushi restaurants.

OK, now bear with me: Thanks to the huge Mexican population in California and the fact that California used to be a part of Mexico, you can find the best Mexican food outside of Mexico in California! Tacos are a staple of the state’s cuisine, and since we are right next to the Pacific Ocean, fish tacos are a must. (California has one of the highest per capita consumption of seafood, and once you’ve tried a fish taco, you’ll know why.)

This is exactly what it sounds like: carb overload of the magical kind. Carbs on carbs are never a bad thing, especially when they involve two dishes that are already amazing on their own. No words will do a Mac and Cheese Pizza justice, so just send your taste buds on the comfort-food  ride of a lifetime.

If you like carbs but are also a huge meat eater, then the carne asada fries are a must. Think nachos but with fries instead, topped off with salsa, guacamole, sour cream and cheese for that scrumptious final touch. The dish was invented in San Diego, so it’s the perfect snack tradition after surfing, sightseeing, or basically anything else you do there.

Tripe A neither describes a restaurant nor an association or band. It refers to Avocados, Almonds and Artichokes, aka California’s 2013 state fruit, state nut, and state vegetable. California is an agricultural powerhouse, so it only makes sense to honor some of the best and most delicious produce – by eating it. Luckily, the three either are part of or go with most of the dishes mentioned here, so you don’t even have to go out of your way to experience these local delicacies.

California brought us McDonald’s, so it’s only natural that I would consider the state to be the home of burgers. However, In-N-Out Burger puts all other burger joints to shame: It’s fast food, but the fries are cut and cooked directly there while the employee wear outfits out of a 1950’s film. Plus, there’s a secret menu that offers even more amazing options – and when it comes to burgers and fries, having more options has never ever been a bad thing.

As I said before, there are plenty of nationalities and cultures that come into contact with one another and thus, Californians welcome and accept various types of food. Pho became really popular a few years ago, and this Vietnamese noodle soup has never lost its popularity since – probably also because it’s been used as a recovery tool for sickness and late nights.

I have to end this with just your basic burrito because you can’t think of Californian food without thinking about Mexican food. There are tons of little family run places and food trucks that offer burritos bigger than your arm and for such a cheap price. One bite and you’ll understand the meaning of life and wonder when you’ll be hungry enough for the next tortilla-rolled piece of heaven.

Tags: Travel tips, US, Food, California
Hungry? California is waiting!Learn More
Get the latest on travel, languages and culture in the GO newsletterSign me up