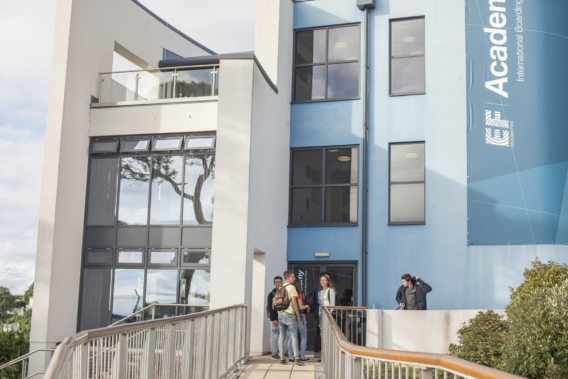 What a term it has been. We have had so much going on from day one it’s hard to know where to start so I guess the beginning is the best place.

As always, we opened the doors this year to lots of expectant faces – some looking calm, some a little nervous, but all excited about the year ahead. Once the students met their tutors and got the paperwork out the way it was time for a bit of fun with beach games and rides on Torbay’s gorgeous English Riviera Wheel. This was before the annual fish and chip supper and the Head Masters welcome quiz.

Student Life got off to a great start with our Student Life Fair where students had a chance to see all the school clubs available with a chance to try a few things out like climbing on an indoor climbing wall, grab a camera for a quick Clik Club project or grab some house goodies from the house stalls. They could also sign up for the huge selection of trips we have available in our two enrichment weeks including Thorpe Park, exploring London media, art in Barcelona, Skiing in Poland, or a trip to Disneyland Paris.

A new school year needs a welcome party and this year we planned a garden party at the Allerdale residence because of its fantastic garden and dance floor. Unfortunately, the great British weather had a word or two to say about that and the heavens opened all day long, so the garden party became a big party for the Houses. No one seemed to mind and everyone had a great night.

Our clubs program this year has really stepped up with a number of new clubs including Book Club and Music Production. What’s been amazing is the number of students participating so much so that we have had to add a number of extra nights to the Japanese Cooking and Culture, Robotics, and Clik Club meetings.

IB students have ticked the learning outside the classroom box in CAS with weekly outdoor education lessons including coasteering and kayaking sessions. But we wouldn’t want this kind of fun to be exclusive so we have had weekly sailing sessions on the nearby river Teign and our increasingly popular weekly rock climbing club. Students on the Duke of Edinburgh Award have also embraced the great outdoors across the border in Wales where we spent three days hiking across the Black Mountains.

Academically, the term got started straight away and this year we have welcomed a number of new teachers. This has coincided with the introduction of new subjects, including History and Global Politics which has brought a great balance to our curriculum.

Academics here aren’t all about classrooms and textbooks and we have had some great academic trips already including trips to the theatre at Exeter University and the Grayson Perry exhibition in London at the Tate. Science students have visited the Science museum We The Curious in Bristol and our Math’s students have competed in the UK Math’s challenge with several making it through to the national final.

Our sports department have had a great year already with students competing for a winning in national championships in badminton and swimming which was again held at the Olympic swimming pool in London. Our football team has held their own in the southwest league and we have much more to come in sport including cross country nationals and a southwest tennis qualification.

We have had some fantastic weekend trips and managed to go a little further afield this year. As well as the usual trips to nearby Bournemouth and Bristol we have also had Saturday trips to Stonehenge and London. Lots more to come here including Birmingham, Cardiff, Alton Towers and a second trip to London.

When students haven’t been on trips or been sailing they have had some great things to do including Torquay Starbucks opening exclusively to our students on Friday nights and Torquay Cinema showing the hottest releases again just for our students on Saturdays.

Last year saw the start of our House System pitting Elberry, Saltern, Oyster, and Anstey against each other in a range of competitions and this term we have had some very close fought competitions but amazingly Elberry have managed to win in the Bake Off, Debate, and Talent Show. In our Sports Day held at Exeter Arena, Anstey managed a great win with some fantastic results in short and long distance runs.

It has been an incredible term with so much going on both inside and outside of the classroom but one of the things I am most of is the amazing response our students have had to the charity days we have held because we have raised a staggering £1000 for Children in Need and the Macmillan Cancer charity. This says a lot about our school and the attitude we foster in our students.