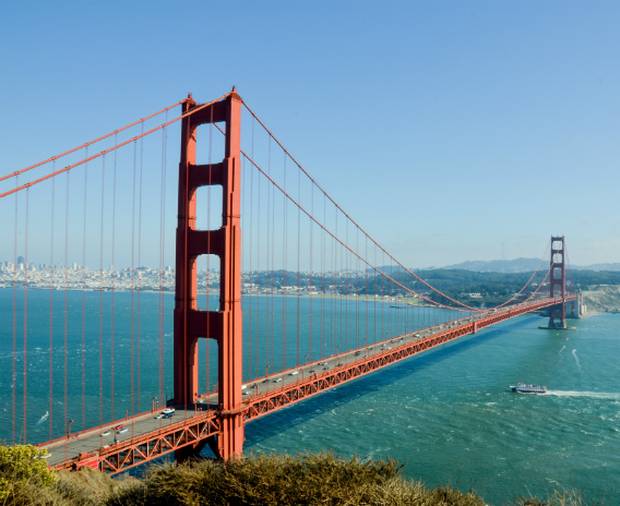 “California, the land of avocados, the great outdoors and the world’s best city – San Francisco…”
“Hold up, Martinique. I’ve watched Silicon Valley and all, but the “best city” title? That might be a stretch.”
“You see, Sara is from ‘SoCal,’ also known as Southern California, whereas I am from ‘NorCal,’ also known as Northern California (although I prefer to say the Bay Area, but that’s a story for another day).”
“Yeah, and as Martinique was saying, we’ve got a lot going on here in SoCal – sun and sand, gorgeous views, and more stars than the Milky Way (actual fact).”

Despite the rivalry between NorCal (Martinique) and SoCal (Sara), it is the state’s differences and diversity that make it so great. We’re proud of the innovation in the north, we’re amazed by the creativity of the south, we love our Cali-grown products, and we work hard to live life on our own terms. We’ve got different vibes and lifestyles, but there’s one thing we can always agree on – it’s called the Golden State for a reason.

NorCal: We are all about flannel. I call it “lumberjack chic,” and it’s not just good style, it’s also a practical look for Northern California’s seasonal weather. Yes, California isn’t all palm trees and sunshine – shocking, I know. In NorCal, we have rain, fog, and snow, but don’t worry, we keep wearing flip flops. That’s because everybody knows flip flops are year-round footwear, and they pair perfectly with sweaters and jeans. Right Sara?

SoCal: Well, I can’t completely agree with the reasoning behind wearing flip flops in the snow, but, here in SoCal, thanks to our year-round sunshine, we can wear pretty much whatever we want. Want to be a chic fashionista on a Monday and a grungy rockstar by Friday night? Do you, boo boo! You’re never wrong with a flowy dress or a moto jacket, and there is an accurate short skirt reputation in LA. But, no matter where you go, flip flops are acceptable. In the midst of a rare El Niño storm, at your roommate’s wedding, a fancy restaurant – flip flops are always a good idea in California.

NorCal: San Francisco! This “City of Fog” is so well known that even the fog has a name – people call him Karl and you can follow him on Instagram. Unfortunately, Manhattan has now overtaken us as having the largest Chinatown outside of China, but we still have the oldest in the country. You can also walk the famous Golden Gate Bridge, or, if you’re feeling lazy, ride the cable cars – a historical landmark in themselves. We also have plenty of hills and parks that offer prime locations for picnics, cute colored homes, probably the coolest street in the world (Lombard Street) and more queens than England. Fortune cookies and sourdough bread were invented here too, so we basically brought peace to the world since everyone loves carbs.

SoCal: Los Angeles! The “City of Angels” – it’s eclectic and sometimes pretty weird, but it’s always working on itself. This creative capital has been an iconic backdrop to a number of masterpieces, the most notable is the innovative Hollywood empire. But, as any local will be quick to remind you, LA isn’t just movies. The city has also been the site of numerous cultural and artistic revolutions. From hip hop to rock and roll, journalism and science fiction, comedy and athletics, it’s churned out inspiration and world-class entertainment basically forever.

NorCal: We have a lot of them: the dreamy and funny James Franco; Clint Eastwood, the movie icon; and Bruce Lee – this ties back to Chinatown in San Francisco since he was born there. No one really thinks of martial arts without Bruce Lee so he literally ninja kicks out the competition. Also, if you’re at all familiar with American Football, Tom Brady, the star quarterback for the New England Patriots, married to supermodel, Gisele Bundchen, is also “in the know.” Tom Hanks, another movie icon. And last but not least, Steve Jobs! Yes, one of the founding entrepreneurs of Silicon Valley – so basically technology was invented here. Don’t fight me on this.

SoCal: Hollywood is obviously the most famous part of SoCal. Actors like Will Smith and Natalie Portman came here and became stars, while SoCal-born celebs like Leonardo DiCaprio, Zac Efron, and Jessica Alba were seemingly destined for the spotlight. But there are loads of other famous residents and locals. From athletes like Serena Williams and Kobe Bryant to musicians like Beck, Snoop Dogg, and Miley Cyrus. And that’s not even mentioning all the famous writers, painters, architects, and journalists living under our sunny skies. Southern California is also home to influencers and business-minded heirs and heiresses like the Kardashians/Jenners and the Hilton sisters.

NorCal: Like almost anywhere in USA, Northern California is very car-centric. But, since we are sensitive to the environment, you see plenty of hybrid gas and electric cars on the road. The BART train is also reasonably efficient if you just need transportation in the San Francisco Bay Area. Cars and trains aside, I like to think we invented the phrase, “health is a lifestyle.” And while you can find delicious and nutritious avocado in basically any dish in California, we also take care of ourselves by being very outdoorsy. Yosemite, Point Reyes, Redwood National Park… there is more hiking, mountain biking, and skiing in NorCal than you could ever imagine. Our outdoorsy lifestyle is probably why we are known as being tree huggers, but we didn’t choose this environmentally-conscious lifestyle, it chose us.

SoCal: The SoCal lifestyle could best be described as “everything at once.” Everybody has a bike, but you still drive everywhere. We’re proud of our juice cleanses and want yoga bodies, but we’ll also fight you if you dare to insult In-N-Out Burger. English or Español? There’s a good chance we’ll try to hold it down in both. And we can’t help it if this is where trends originate. Kids from SoCal have been rocking the three R’s (recycle, reduce, reuse) since Kindergarten, but LA still has a smog problem. We spend way too much time in our cars, but I have faith in the Angelenos – we’re working on ourselves.

NorCal: While we do have plenty of Mexican food, you will find much more in the South due to its proximity to the border. Nevertheless, with large Asian and Latino populations combined with Silicon Valley innovation, NorCal has become ground zero for fusion cuisine. Have you heard of the sushirrito? Yeah, it’s here. We also eat Vietnamese pho to cure hangovers, California burritos after surfing, and are all about dim sum on the weekends. And “dim” we have “sum” more.

SoCal: From elotes to carne asada tacos, SoCal is known for its awesome Latino cuisine. But, as the ultimate melting pot of creativity and career aspiration, we celebrate our diversity on every plate. Combining fresh ingredients, barbecues, and gluten-free, lactose-free, paleo, vegan everything, SoCal cuisine brings big flavor and big variety. It’s the proud birthplace of food names like Huy Fong Foods “Sriracha sauce,” In-N-Out Burger, Roscoe’s House of Chicken and Waffles, and the Trader Joe’s natural food store. Stay south and enjoy street tacos and empanadas or go west and get wood-fired California pizzas and fancy wine from places like the San Pasqual Valley. And, of course, the Avocado is never up for debate.

Tags: Culture, Culture calling, Los Angeles, Travel preparation, City, San Francisco, California, West Coast
Would you choose NorCal or SoCal?Decide for yourself
Get the latest on travel, languages and culture in the GO newsletterSign me up