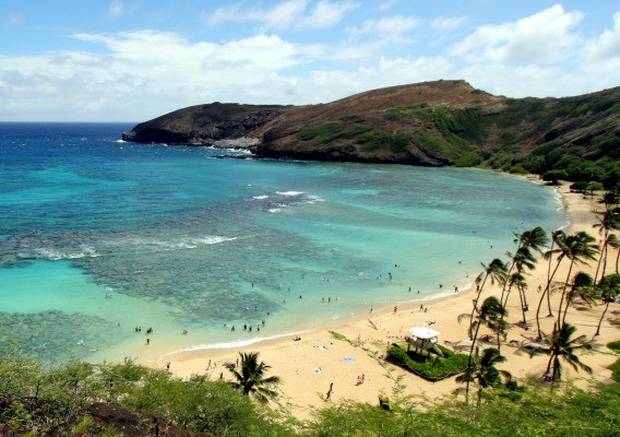 Aloha and welcome to our guide to the picture-perfect American state of Hawaii. Tucked away some 2500 miles from the mainland, this Pacific wonderland boasts sun-kissed beaches, world-class surf spots, and some of the greatest natural spectacles known to man. And that’s just the start! Add to the appeal a rich cultural heritage and a super chilled way of life and you have yourself all the ingredients of a dream destination. So, without further ado, here are eight reasons why Hawaii is perfect for you. (And you.)

There are beaches, and then there are Hawaii’s pristine sandy shores. These golden ribbons stretch for 750 miles around the state’s eight main islands, but be warned: Once sampled, no other beach will (probably) ever compare. From Waikiki in Oahu to the more secluded beaches of Maui and Kauai, you have a range of beaches to enjoy sunset BBQs, and most importantly…

Surfing is more than just a hobby in Hawaii. It was invented here and continues to play a major part in the state’s cultural identity. No visit is complete without riding (or at least attempting to ride) a few waves. Luckily, there’s a swell ready-made for all levels of expertise: Beginners can hit the waves at Ehukai Beach Park in Oahu, while pros can tackle the legendary waves of Jaws in Maui.

Not content with stunning beaches and ideal surf conditions, Hawaii also boasts a truly breathtaking interior: Rainforests and volcanoes await those who venture inland. Exploring the islands’ volcanic past and present is easy at both the Haleakala National Park and Hawaii Volcanoes National Park. Away from the volcanic attractions, strap on your hiking boots and discover the enchanting natural sights that litter the state, including Manoa Falls, located just a 20-minute drive from the state capital, Honolulu.

The Big Pineapple is a city with an unmistakable Hawaiian twist. After all, there aren’t many cities in the world where your lunch break consists of surfing the waves of an iconic beach. Once you manage to pull yourself away from Waikiki beach, explore the neighborhoods and take your pick from the restaurants, shopping options, and nightlife spots that line the likes of Kalakaua Avenue, Lewers Street, and Kuhio Avenue. Wherever you are, you’re never far from Oahu’s natural splendor – such as Diamond Head State Monument or Hanauma Bay – and numerous scuba and snorkeling opportunities.

If hiking or city-exploring doesn’t quite do it for you, fear not, as Hawaiians know how to get your adrenaline pumping: The state has a number of bucket-list-worthy activities for you to try out. Go skydiving in Maui or paragliding in Oahu, or try other extreme sports such as cliff diving in The Big Island and swimming with sharks in several locations. (It’s safer than it sounds!)

Hawaii is a paradise for food lovers with a cuisine reflecting the various nations that have influenced the islands’ culture and created a mouthwatering blend of Asian and Polynesian flavors. Treat yourself to a dish or two of lomi salmon, don’t leave without sampling a squid lu’au, and tuck into a Kalua pig at a traditional luau. However, more than anything, you must sample some SPAM®, which has basically become the islands’ national food: Hawaiians devour more of the canned precooked meat than any other state in the U.S. – the roughly 1.5 million people eat about 7 million cans every year. We recommend spam musubi, a native sushi dish, spam fried rice or spam with eggs.

The rich cultural heritage of Hawaii can be found across the islands, and no trip to The Aloha State is complete without attending a luau: These traditional parties usually include a large feast, music, and hula. (Be careful to avoid the tacky, tourist-trap luaus though.)

Hawaii has two official languages, and even though English is the dominant language, Hawaiian is a thing of beauty: It features words like humuhumunukunukuāpuaʻa (the official state fish), kawaiolaonapukanileo (a traditional Hawaiian musical group) and manamanalima (a finger). The Hawaiian alphabet is made up of 13 letters (five vowels, seven consonants, one symbol), and every word ends in a vowel, making the language an absolute pleasure to speak and hear!

Tags: Travel tips, US, Hawaii, Visitors Guide
Put all these tips to good useLearn More
Get the latest on travel, languages and culture in the GO newsletterSign me up