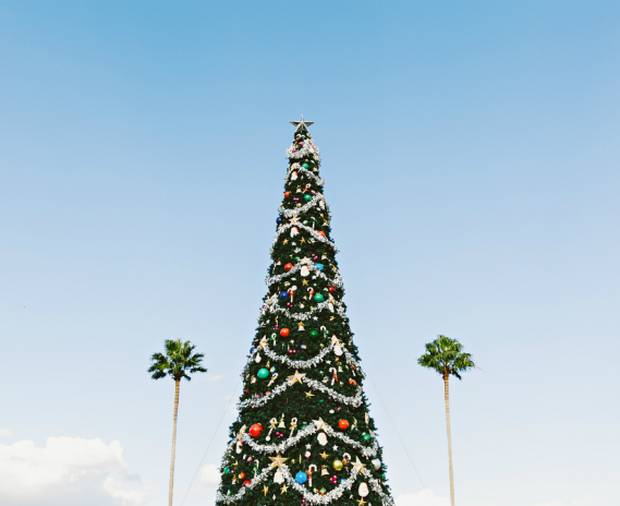 Far from snuggling up in warm winter jackets, come December the Southern Hemisphere’s residents are down to their shorts and t-shirts. Yes, Christmas in the south is a different kind of affair – but what can you really expect? To help you imagine what it’s like to swap snow for sun, and pudding for prawns, we’ve rounded up what we like best about the “silly season” below the equator.

“Christmas where the gum trees grow, there is no frost and there is no snow,” goes an Aussie holiday tune—and boy is it true! If you’re lucky enough to spend the holidays in Australia, pack extra sunblock and be prepared for three other delights: seafood, salads, and sport. While it’s uncommon to eat a hot meal, you won’t go hungry. Australians tend to indulge in seafood platters, fish, cold turkey and ham, pavlova, and of course, a glass of ultra-chilled bubbly. Your own backyard and pool are important parts of Christmas Day, with kids taking to the waters to try out new pool toys and the whole family enjoying a game of backyard cricket. (So too is the beach; the shores close to capital cities Brisbane, Sydney, and Perth are full of Christmas cheer on December 25!) On Boxing Day (the day after Christmas) Australians may bargain hunt at the Boxing Day Sales, watch the Boxing Day Test (a cricket match between Australia and another national team), go to the movies to catch a new release, or just lie around and sleep off the excess of Christmas Day.

Kiwis, like Australians, are lucky enough to be able to celebrate Christmas outdoors. Kids have a long summer break during the holiday season, meaning families can hike; explore coves in and around waterside cities like Auckland; camp; and of course, inhabit one of the Southern Hemisphere’s favorite locations: the beach. As for what to wear and eat, don’t forget your jandals (flip flops) and to leave room for a long afternoon lunch of salads and seafood on December 25th. While they do decorate pine trees in their homes, New Zealanders have their own “Christmas tree,” the Pōhutukawa, a native tree that blooms with vibrant red bauble-like flowers during the holidays.

Christmas “dinner” is more of a Christmas lunch, with mince pies and glazed gammon, or turkey, roast duck, roast beef on the braai (barbecue). You might also get to try yellow rice with raisins, ice cream cakes, and malva pudding. All this eating is likely to happen outdoors in the hot weather in and around Cape Town.

Like in much of the world, South Americans exchange presents, set up Christmas trees, and get together with family and friends. The store-bought tree is often accompanied by a pesebre (Nativity scene) and it’s common to attend midnight Misa del Gallo (“Rooster’s Mass,” a reference to a rooster which is said to have crowed on Christmas night). Some employers will give their employees a Christmas canestón, or hamper, containing essentials such as rice, sugar, cookies, and flour. Perhaps the biggest difference between the Southern Hemisphere’s English and Spanish-speaking countries is that Latinos have their Christmas meal on December 24 and often celebrate (give gifts) until Epiphany on January 6.

On Christmas Eve, families and friends will unite over a table groaning with some European dishes such as turkey and ham, alongside local additions. Bolivians tuck into picana (a spicy soup with chicken, beef, and corn), while Venezuelans enjoy hallacas (corn dough stuffed with meat and wrapped in banana leaves), pan de jamón (bread filled with ham and raisins), and dulce de lechoza (a sweet treat made with papaya and brown sugar). Throughout the continent, lechón (suckling pig) may also be served, or the family may gather around a full-blown asado barbecue. A Brazilian ceia de Natal (Christmas dinner) would be remiss without crispy fried balls of bacalhau (codfish); farofa (fried cassava flour with crispy bacon); rabanadas (like French toast, but with sugar and spiced port wine syrup instead of maple syrup); plus nuts and tropical fruits.

Sure, snow, frost, and roasted chestnuts are picturesque, but don’t discount what goes on below the equator! Christmas in the Southern Hemisphere is fun, outdoorsy, full of fusion dishes, sunshine, and light-hearted joy. You should try it some day.

Tags: Culture, Australia, Sydney, Brisbane, New Zealand, Auckland, Christmas, Beach, Cape Town, South Africa, Down Under
Want to travel and learn a language below the Equator?Explore destinations
Get the latest on travel, languages and culture in the GO newsletterSign me up