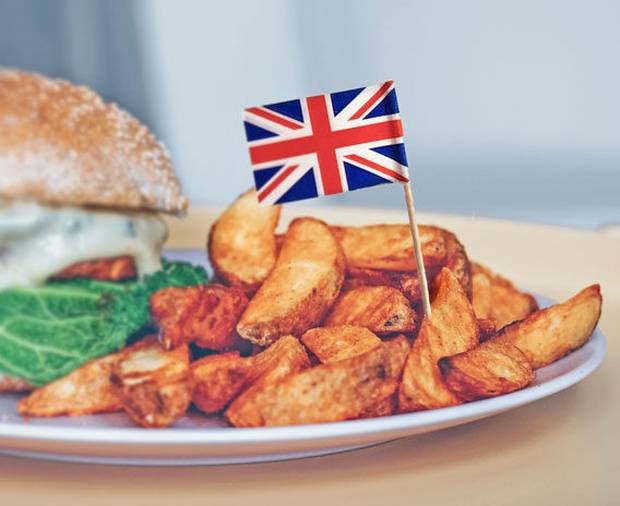 If there’s one essential thing you need to get a firmer grasp on UK culture, it’s knowledge of the slang words Brits can’t stop using. Just imagine one day arriving in London and looking super strange because you can’t communicate with the locals. IMAGINE! Luckily, I’m here to teach you six common British terms you can’t live without.

The equivalent to shotgun in US English, this is what you say when you’re claiming something before everyone else, like the front seat of the car or the last scone (if you don’t know what a scone is, Google it and then sit in shame for a while. Then find a recipe for scones and make some).

Think you know how to order French fries in Britain? You’re wrong! In the UK we have a worryingly high number of words for different types of potato foods. We call French fries just fries, and thicker-cut fries that come from a chip shop are called chips. Then you’ve got thick, triangular chunks which we call potato wedges, which aren’t the same as circular fried slices (otherwise known as chips in other countries) which we call crisps. That’s all before you move onto the more complex crisp types, like Tortilla Chips (which count as crisps but are called chips, but aren’t chips like actual chips). Maybe just stick to healthy foods to avoid confusion?

When something’s questionable for suspicious, we call it dodgy. It’s a funky throwback to 1990s street slang and just fun to say.

When something’s made you unhappy or annoyed, you could say you’re miffed. This one might not be the coolest slang to use with the younger crowd, but they’d probably use something much more NSFW. Best to stay as polite as you can and use the PG13 version.

This one’s so common you can’t get by without knowing it. In the UK quid is slang for a one pound coin. Be careful to clearly pronounce any words before this that end in an ‘s’ because otherwise it’ll sound like you’re saying squid, which hilarious but inaccurate.

Want to study at a university in the UK? Make sure you’re calling it by the right name. In Britain, college means something totally different to what it means in the US, where it’s another word for university. UK colleges are for students aged between 16 and 18, who graduate from there to go to university, which is shortened to just uni. If you don’t get it right, you might end up studying in the wrong place and with people 2 years younger than you. How embarrassing!

Didn’t get into the uni you wanted to go to? You’re probably really disappointed and upset – otherwise known as gutted. Where this comes from is anyone’s guess, but it probably has something to do with the sad feeling you get in your gut when you’re upset.

Maybe you did get into your favorite uni, but you keep faking illness to get out of classes. Firstly, shame on you. Secondly, there’s a word for this and it’s called to skive. The ‘ski’ part is pronounced like sky not ski. Now get back to class!

Tags: British, English, Vocabulary, Slang
Learn British English in BritainLearn More
Get the latest on travel, languages and culture in the GO newsletterSign me up