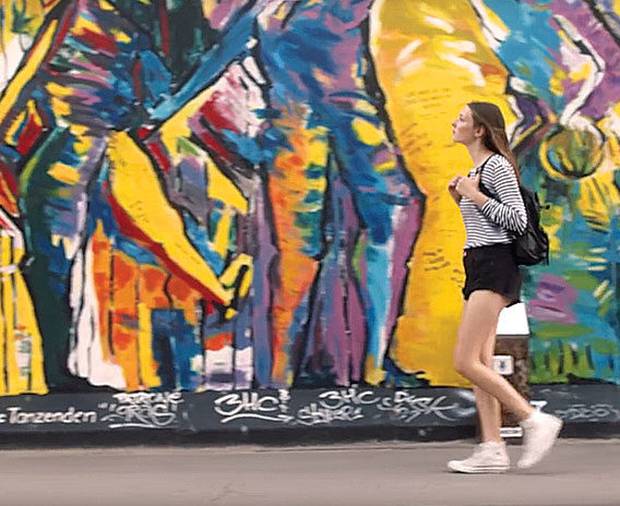 Unquestionably one of the coolest cities in the world, Berlin has a lot more to offer than just beer and bratwurst. The German capital’s famed art scene, coupled with an indefatigable nightlife, gives the city its energetic yet unequivocally gritty character. Described by a former mayor as “poor and sexy”, Berlin attracts people from all over the world with its air of cool mystery, creating a diverse population of over 3.6 million people.

Not convinced yet? Take a virtual journey through the city’s best bits and discover just a few of the many reasons to love Berlin.

Whilst the mere mention of food in Berlin may conjure up images of lederhosen-clad figures doling out sausages and sauerkraut, the cuisine in Berlin goes far beyond traditional German fare. In fact, because of its diverse population, the food on offer is actually very varied. Street food is king in Berlin, with markets located all over the city. Whether you fancy a bite of traditional Turkish baklava, a snack of dumplings or a burger with a ramen bun, the street food in Berlin will satisfy any appetite.

I may be somewhat biased, but there are few languages quite as charming as German. Home to inconceivably long words and phrases that simply don’t make sense in any other language, German is pretty darn cool. Berlinisch is the typical dialect you’ll hear around the city, originating from the Brandenburg variant and featuring phrases unique to Berlin. Spend enough time in your local café having “Kaffee” und “Kuchen” and you may just pick up a phrase or two.

With the aforementioned vibrant art scene, it’s unsurprising that colourful works of street art span the entire city. A far cry from haphazardly sprayed graffiti, the city’s street art is an individual expression of its buzzing underground culture. As impressive as it is colorful, the many masterpieces of the streets make for a fantastic Insta snap. Wander through the city and discover the impressive works solo, or via a free guided tour, that will take you off the beaten track and into the heart of Berlin’s hidden gems.

An undeniable draw of Berlin is its bike-friendly culture. Not only does it get a big thumbs up on the environmentally conscious front, but the budget-friendly nature of cycling is also a big advantage for the city’s sizeable student population. However, the usual cycling-city stereotype (an unreliable public transport system) does not apply here; in typical German fashion, public transport is extremely efficient, meaning there are many ways to get around the city on the cheap.

German culture is famed around the world, with traditions like Oktoberfest being celebrated in cities across the globe. With its beer gardens, museums and art galleries, Berlin is more than capable of supplying tourists and locals alike with a steady dose of German culture. For an everything-at-once experience, head to Kulturbrauerei (which literally translates to culture brewery), a cultural complex consisting of over 20 buildings and featuring restaurants, shops, dance centers, museums and more. Want something even more quintessentially German? Check out the Currywurst Museum, where you can soak up some culture whilst lounging on a giant sausage sofa.

Whilst many of the world’s busiest cities are concrete jungles, Berlin is home to over 2500 parks, which means there’s no shortage of open green spaces. If gently cascading waterfalls are your jam, head to Viktoriapark for a calming experience that will improve even the most hectic of days. For a more urban vibe, there’s the Mauerpark, named after its status as a former part of the Berlin Wall. No matter your park preferences, with so many options on offer, you’re bound to find a place of refuge that suits you.

Vintage shops are to Berlin what gelato stands are to Italy – the city is teeming with trendy spots where you can trawl the aisles for vintage gems. Perhaps most exciting are the shops where instead of paying for each item separately, you pay by weight. PicknWeight is one such location – a place where any vintage fashion aficionado would be hard-pressed not to find a thing or ten to take home with them.

Techno originated in Detroit in the mid 1980s and arrived in West Germany around the late 80’s. Following the fall of the Berlin Wall, many of the abandoned buildings and bunkers were taken over by young people and used to host parties, giving way to a new kind of club. A non-stop party scene emerged, enmeshed with the relief and freedom of Berliners following the reunification. The techno and electronic music scene lived on and has become a pivotal piece of the Berlin culture and nightlife puzzle, attracting music-enthusiasts from all over the world.

It likely won’t be the cheapest place you’ve ever visited, but if you’re comparing to cities like Zurich and London, Berlin is a whole lot more affordable. With a cheap public transport system that will get you all around the city and authentic meals that won’t break the bank, you get a lot of bang for your buck in Berlin.

It’s always nice to get the best of both worlds when visiting a city. When busy city life gets a bit too much, you can head on over to the beach for a dose of sun, sand and serenity. Not only is the beach at Wannsee a great place to take a breather, it also happens to be absolutely beautiful and very photogenic (especially around sunset).

Tags: Travel tips, Germany, German, Berlin
Study German in Berlin with usLearn more
Get the latest on travel, languages and culture in the GO newsletterSign me up

8 places you absolutely, positively must visit in Berlin
By Yaron · 3 min read
10 hidden gems in Berlin: Beyond the Brandenburg Gate
By Julie · 8 min read
The ultimate guide to your summer in Berlin
By Livia · 4 min read
8 ways to make packing for a trip more eco-friendly
By Emma · 4 min read
See more from