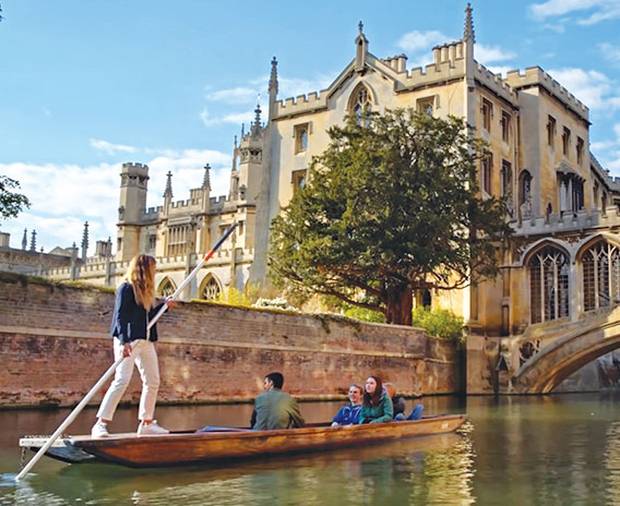 Best known for its legendary university, Cambridge is one of the most famous cities in merry England. With greenery galore and beautiful old buildings as far as the eye can see, it’s a popular getaway-spot for Brits and tourists alike. The quaint city may have a reputation for being a slightly quieter destination, but it certainly knows how to charm with its beautiful scenery and many hidden gems.

Join us on a tour around Cambridge’s best bits and discover ten of the many reasons to love this beautiful city.

There are few cities as quintessentially British as Cambridge. Due in part to it being the home of one of the most famous universities in the world, it’s definitely a winner when it comes to British culture. With remarkable buildings dating back hundreds of years, there’s an awe-inspiring piece of British tradition at every turn. Whether you choose to wander the greens and admire the old colleges or go for high tea and soak up the unadulterated Britishness, Cambridge won’t let you leave without a sizeable dose of good old Blighty culture.

The somewhat unimaginatively named River Cam is unquestionably one of the most tranquil and beautiful parts of the city. Not only does it provide a pretty stellar backdrop for summer picnics and drinks, it also lends itself to local punters. Punting involves riding a flat boat down the river, with someone stood at the back, using a pole to push the boat along. Cruise around the river on a tour, or rent your boat and take the punting into your own hands – either way, you’ll have a first-row seat to the gorgeous scenery around you.

Historically consisting of a blend of estuary English, East Anglian English and Queen’s English, the “traditional” Cambridge accent is akin to what one would expect to hear on Downton Abbey. Whilst the influx of students means that the “standard” accent has dissipated and changed over the years, Cambridge is still one of the best locations if you want to learn the quintessential British English. Who knows, a few months in this pretty city and you might be speaking like a local, old chap.

Given its academic context, it’s unsurprising that Cambridge is home to many historic museums. Head to The Museum of Archaeology and Anthropology to see a collection of artifacts spanning almost two million years, or tour the Whipple Museum for a dose of all things science. Don’t forget to pay a visit to the most famous of them all, the Fitzwilliam Museum, home to an impressive collection of historic art.

You can’t talk about reasons to love Cambridge without at least briefly paying homage to the legendary University. Founded in 1209, it’s been ranked in the top two universities in the UK for years (alongside Oxford). Alumni include legendary names and faces such as Stephen Hawking, Charles Darwin, and Isaac Newton. Actors Sascha Baron Cohen, Emma Thompson, and Tom Hiddleston are some of the more recent graduates. Individuals associated with Cambridge University have also won a total of 89 Nobel Prizes spanning all six disciplines – not half bad.

No trip to Cambridge is complete without a brief stop at Market Square. With vendors from the area selling local produce and freshly cooked food, it’s a great place to grab a bite to eat while out and about. Besides delicious meals and snacks, there are many other items for sale. Go for a stroll through the market and take a gander at the various stalls selling everything from art and clothes to bikes and plants.

If street food is your jam, then keep an eye on the foodPark website to see where the hub of vendors will be located that day. With a regularly rotated selection of foodPark traders, there’s constantly something new on offer. Taste dishes from all around the world at weekly lunch markets (and popup night markets) and treat your taste buds to the best street food the city has to offer.

Cambridge is considered a model cycling city. Given that a large portion of the population is comprised of students, who can only obtain parking under special circumstances, bicycles are one of the most popular means of transport. The bike-friendly layout of the city further promotes cycling and, as a result, the city isn’t as clogged up by cars and traffic as other locations in the UK. Hats off to Cambridge for its commitment to the environment.

The Cambridge University Botanic Garden covers around 40 acres of land and is home to blooms and plants from around the world. Founded in 1762, it consists of various different gardens and glasshouses. Not only do the colors in the garden make for perfect social media fodder, it is also a prime picnic spot and a lovely way to spend an afternoon during the warmer months.

To meet the demands of the city’s young active residents, Cambridge plays host to a jam-packed schedule of outdoor lifestyle activities and events. Ever been to the movies outside? Movies on the Meadows is an opportunity for people to come together and watch films whilst sat on the grass on balmy evenings. The Big Weekend features a range of activities that draws tens of thousands of people to the city each year. From comedy festivals to glittering firework displays, Cambridge is always trying to have a good time.

Tags: Travel tips, English, Cambridge, Europe, England
Study English in CambridgeLearn more
Get the latest on travel, languages and culture in the GO newsletterSign me up

50 things we love about the UK (and know you’ll love too)
By Kaisa · 9 min read
10 hidden gems in Cambridge
By Emma · 4 min read
The city of cycling geniuses: Cambridge infographic
By Kaisa · 1 min read
10 music festivals that should be on your bucket list
By Erin · 4 min read
See more from