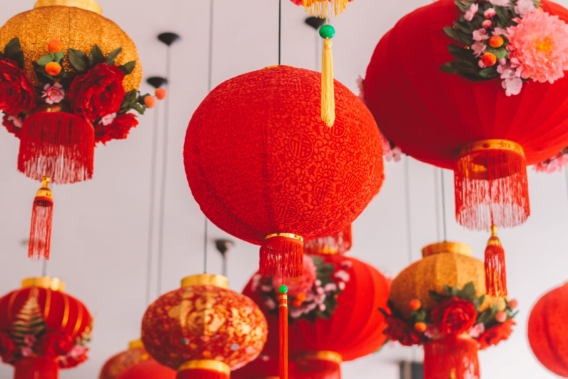 Dancing, singing, amazing cultural performances and ethnic cuisine marked the Year of the Dog at the annual EF Academy New York Lunar New Year celebration. Students and faculty were ‘wowed’ by the amazing show put on by students from China, Korea, Taiwan, Thailand, and Vietnam. The show began with greetings from Headmaster Dr. Brian Mahoney and the student directors of the show, Ai-Ling Hsiao and Minh Ngoc Dam. Dr. Mahoney remarked that many of the traits brought forth by the year of the dog, including honestly, loyalty and reliability – are traits that represent the students and culture of EF Academy, with students coming to our campus from over 70 countries around the world.

This year’s performance began with a new student leadership format. For the first time, three directors worked together to bring the festival together. Zeren Han, Ai-Ling Hsiao and Minh Ngoc Dam were eager to take on the leadership position and were very pleased with how well the group worked together. Ms. Hsiao planned and directed the performance while Mr. Dam worked to ensure the backstage was running smoothly. Ms. Han planned the party with excellent cultural cuisine which follows the show each year. The Lunar New Year is the most significant holiday in many Asian cultures. The students take great pride in their work to put it together each year. Close to 100 students contributed to the show, including artwork on the walls and around the school building, managing the house, working backstage, preparing the food, and contributing to the performances by each country.

At the last moment of the show, all performers come together on stage together to thank the crowd and celebrate the great performance. For Zeren, this is her favorite part of the show. It shows the pride and importance of the holiday for all involved. “It’s a precious opportunity to share our culture with others at the school and have them understand it.” While Minh enjoyed performing and the heat of the spotlight in past years, this year he found he greatly enjoyed planning the logistics of the show backstage. All three directors commented about how happy they were the countries performing were able to come together to put on a great performance without any conflicts. They also appreciate the support from the administration, advisors, and theatre department.

EF Academy celebrates the Lunar New Year each year with a show directed and performed by our diverse student body. After the performance, students are treated to Bubble Tea and plenty of ethnic cuisine from the region to celebrate the holiday. The Lunar New Year show is advised by Dr. Huong Tran, IB Vietnamese Literature teacher and Biao Cai, IB Chinese Literature teacher.