Black History Month: Friends of Philosophy host speaker from the home of Rastafarianism 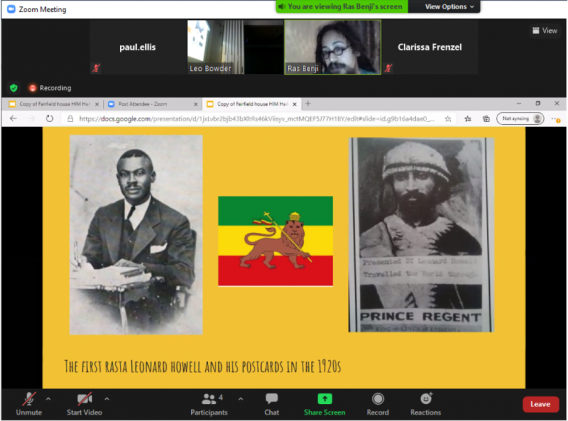 Tuesday October the 27th saw Cotuit Lecture Hall grooving to the reggae sounds of ‘Jah Live’, by Bob Marley, as the first Friends of Philosophy gathering took place. Over the last few years this semi-regular event has seen topics as diverse as physics and maths and philosophy, the origin of the universe and various theories of personhood, being treated in a relatively informal and relaxed way. Visiting speakers – as well as our own students on occasion – provide much unique intellectual property and stimulus for engaged discussion.

This month, however, being Black History Month, it was the turn of the late Ethiopian Emperor Haile Selassie (1892 – 1975) and his historical and cultural legacy to provide a wealth of material. Though himself an avowed Christian, Selassie was the figurehead of the Rastafarian movement of Jamaica, and inspiration for much in the way of music, art and ‘dub poetry’ as well as being a major player on the international political scene.

We were ably and enthusiastically led in our journey by Ras Benji, a Director of Fairfield House in Bath, UK (where Haile Selassie lived for some time during conflict in Ethiopia) and a true believer. The talk was both informative, and entertaining, providing a mixture of historical detail, cultural richness, music and spiritual insight into the figure of the enigmatic character who became known as Jah Rastafari: the Lion of Judah.