5 spooky Halloween traditions in the US 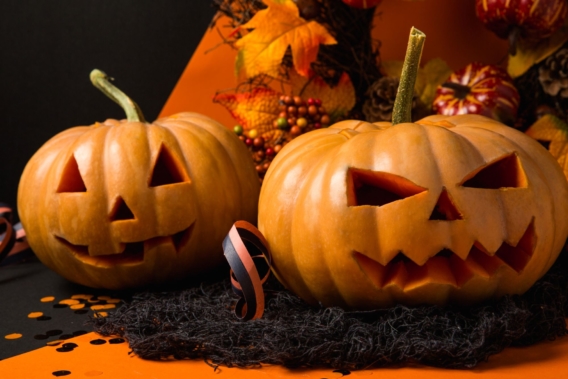 In the United States, the month of October has one singular focus: Halloween. The holiday was originally observed as “All Hallows’ Eve,” a religious celebration to remember and honor the dead. Over the years, Halloween has evolved. These days, October is the time of year that grocery stores sell frightening amounts of candy, Jack-o’-Lanterns decorate every yard, and people spend hours creating scary (or silly) costumes to debut on Halloween itself. While October 31 is celebrated in many parts of the world, no one does Halloween quite like the US. Here are five common and fun Halloween traditions – complete with some local iterations, too!

During the Halloween season, you’ll see Jack-o’-Lanterns on almost every front porch. Pumpkin carving, or making Jack-o’-Lanterns, is one of the United States’ absolute favorite Halloween activities. It’s so popular, in fact, that there’s a town in New York that dedicates an entire exhibit to pumpkins: The Great Jack-o’-Lantern Blaze!

For many families, carving pumpkins is quite an ordeal. But how do you actually make a Jack-o’-Lantern? It often begins with a trip to the pumpkin patch to select the perfect pumpkin. After picking one out, the real fun begins. Once you cut a hole in the top of the pumpkin, scoop out all the seeds on the inside of the until it’s completely hollow. Then, carve a spooky face, complete with triangle eyes and a scary smile. To top it all off, put a candle inside to make the face glow!

One of the best parts of Halloween is getting to dress up! In the days and weeks leading up to the holiday, don’t be surprised to see people in full-on costumes out and about. From mummies, ghosts, and zombies, to pop culture references, cartoon characters, and animals, you will likely see all kinds of crazy and detailed costumes. In New York City, there is an entire parade devoted to showing off costume creativity! Many communities have fun events like this to allow kids and adults alike to don their crazy outfits and celebrate. So, if you see someone covered in face paint around October 31, don’t be alarmed!

The name of this tradition sounds strange, and the tradition itself is perhaps even more odd! While there are rarely tricks, there are plenty of treats on Halloween. Trick-or-treating happens in the evening on October 31. After the school day ends, children don their silliest and spookiest costumes. Then they walk around their neighborhood and collect candy at each house by saying “Trick or treat!” at each door. It’s a fun way for the community to collectively celebrate the holiday, and a fantastic opportunity for kids to dress up as their favorite characters or superheroes.

This sounds absolutely crazy, right? Why would anyone intentionally visit a haunted house? During the Halloween season in the US, venues all across the country transform themselves into mazes of terror. Haunted houses typically have especially scary themes (like clowns), but sometimes bring a variety of horrifying topics together to create the most bone-chilling experience possible. When walking through the dimly lit rooms, be alert for actors who will jump out from behind corners! Only the bravest among us dare enter these hair-raising houses.

From the costumes to the haunted houses, Halloween is one time of year that warrants a little extra creepiness. One popular way to get in the spooky spirit is to recount tales of terror about ghosts, monsters and creepy creatures. In Sleepy Hollow, New York, the birthplace of famous writer Washington Irving, attendees can hear a special dramatic reading of his story, The Legend of Sleepy Hollow. This classic tale of the Headless Horseman and Ichabod Crane is performed by actors who know how to really take the creepiness up a notch. If you’re especially brave, you and your friends can tell scary stories in the dark or around a bonfire in the woods, or even participate in marathons of scary Halloween movies.

Immerse yourself in the US high school experience Join us