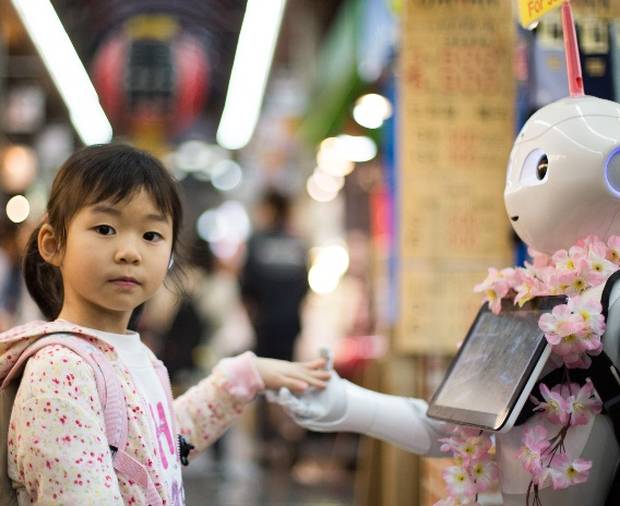 As humans, we tend to imagine that the future will look like a version of the past. As parents, we find comfort in projecting an improved version of our own lives onto those of our children.

Yet, the accelerating pace of technological progress, especially in the fields of automation and artificial intelligence, is such that no blueprint from the past can give us a very accurate sense of what lies ahead.

The only thing certain is that across all facets of life – work included – profound change is on its way.

Lifespans have been rising steadily across the world for well over a century thanks to better hygiene, healthcare and nutrition. With each passing year, newborns live about three months longer than those born in the year prior.

While less than 0.02% of Americans currently reach the age of 100, a 2009 article in the Lancet Medical Journal predicted that over half of children born in advanced economies in the first decade of the new millennium may do so. Even conservative estimates put this at a startling one third.

The reasons are numerous. For one, younger generations tend to lead healthier lives. Today’s teenagers are particularly well behaved: Gen Z drinks and smokes at record-low levels and they exercise more. They are also more educated and socially connected than previous generations – all predictors of longevity.

Healthcare is also improving continuously, and new technologies like personalized medicine (treatments fully tailored to each individual) and genome editing (directly editing our genes) may allow us to prevent diseases or even halt the process of ageing.

2. The end of retirement as we know it

The societal, political and financial implications of such developments are massive.

Take pensions. Even in some of the wealthiest countries in the world, pension systems are coming under strain with too few young workers paying into a common pot that more and more retirees will depend on.

If many or even most children today end up living 90-100 years, the system could collapse. Moreover, it will simply not make sense for them to work for 30 and then retire for another 30.

Working lives will likely need to lengthen significantly to keep the system afloat – and to make longer lives active and meaningful.

3. The rise of squiggly careers

On the other hand, longer working lives will mean that having one, linear career path will become a rarity. Most will need to – and many will want to – reinvent themselves at several points in their lives.

To a large degree, these ‘squiggly careers’, a phrase coined by two leading career experts, are already the norm: Today’s young adults will have about fifteen different jobs in their lifetime, according to a Credit Suisse report, often hopping between jobs, as well as industries.

The rising tide of automation will only accelerate this trend as jobs are destroyed and created and others forever transformed.

Adaptability will be key, but so will the willingness and ability to learn throughout life.

4. The importance of becoming a lifelong learner

2020 brought about decades worth of changes in the field of education in a matter of months. From first graders to university students, almost everyone had to embrace digital learning in some form.

With the rapid change in how education was being delivered amidst worldwide lockdowns, the where and why of education shifted sharply as well.

This helped cement the idea that we should learn continuously by making it more feasible to actually do so.

But are we learning the right things? Yuval Noah Harari, the author of Homo Sapiens and 21 Lessons for the 21st Century, questions this, arguing that “much of what kids learn today will likely be irrelevant by 2050.”

5. Connecting to the cloud

Gerd Leonhard, a leading futurist, argues that “humanity will change more in the next 20 years than in the previous 300.”

Data is one of the key drivers of this dramatic change. Mind-blowingly large amounts of data are being created across a range of platforms, from search to social media, and between devices like smart speakers and self-driving cars, in the so-called “Internet of Things” (IoT).

This data is being harnessed to develop increasingly capable machines and sophisticated artificial intelligence (AI) that can be used to automate more and more tasks that humans perform today.

But the technological revolution may hit us in a much more tangible way first. Ray Kurzweil, a prominent futurist, predicts that our brains will connect seamlessly to the cloud (and all the knowledge therein) by the mid-2030s, giving us access to superhuman cognitive powers.

6. Get ready for an automation tsunami

It makes economic and practical sense for repetitive, routine tasks to be done by machines. Jobs have been replaced in numerous waves of disruption in the past 300 years, moving the majority of workers from farms to factories and finally to offices today. This has brought unprecedented economic growth and prosperity to nearly every corner of the world.

Yet, the next wave may actually turn out to be a tsunami – far more ferocious than anything that preceded it. And even more difficult to predict.

Although doomsday scenarios about a jobless future aren’t likely to come true – by some estimates as few as 5% of jobs will be fully automated – the shift in the kinds of jobs that are available is likely to be dramatic and the turmoil continuous.

The World Economic Forum’s 2020 report notes that within a mere five years, “85 million jobs may be displaced by a shift in the division of labour between humans and machines, while 97 million new roles may emerge that are more adapted to the new division of labour…”

Even in fields that we may think of as resistant to automation, change is likely to be significant.

Fifty common eye diseases can be diagnosed more accurately and rapidly by a software than a doctor and school essays can be graded accurately by a machine.

Daniel Susskind, the author of the Future of Professions, points out that these AI systems do not try to mimic what a human does; they simply use raw computing power and massive amounts of data to do the job better and faster than a human ever could.

But could automation also be a boon? Automation may make many jobs more, not less human, by reducing the need to do boring, repetitive work and by giving us the freedom to focus on more creative and interesting pursuits and ideas, both inside and outside our workplaces.

7. Embracing the machines – or choosing wisely

The need for human oversight of robotic tools and artificial intelligence is likely to remain significant, at least for some time to come.

We may simply feel safer with a human overseeing a computer diagnosing diseases, for example, or want to leave the programming of effective and safe AI systems to a human engineer, not the algorithm itself (there is no knowing what it would create.)

The intersection of man and machine will define how the world of work develops in the decades to come. Peter Diamandis, another futurist, argues that “the real opportunity isn’t going to be AI versus humans; it’s going to be AI with humans.”

On a more tangible level, a 2019 report by the EU notes that: ”In the future… digital skills combined with strong non-cognitive skills [including empathy and communication] will be in greater demand”.

Opportunities will be plentiful in less technical areas as well: hairdressers will still be needed (can you imagine letting a robot wielding scissors anywhere near your neck?), dancers will still be wanted and care work will grow in importance because humans, both young and old, only thrive in connection with other humans.

Even Elon Musk, CEO of Tesla and SpaceX, points out that besides engineering, jobs involving human interaction or art are probably some of the safest.

8. Valuing our humanity and mastering “the four Cs”

Our humanity will remain our most valuable currency in the face of unprecedented change – and our ability to adapt our only true superpower.

Consider communication. Although Google Translate can take over a part of the task of communicating across language barriers, for example, Gerd Leonhard contends that “conversation and unmediated human interaction is crucial to everyday life, and is a precious element of humanity that should be protected.”

“Our humanity will remain our most valuable currency in the face of unprecedented change – and our ability to adapt our only true superpower.”

For jobs in which we manage others or lead, this ability to communicate and collaborate effectively and authentically across cultural and language barriers will remain vital.

Creativity, on the other hand, will become vitally important because true innovation will increasingly come from unexpected places. “Our imaginations are the birthplace of new products, new services and even new industries and new jobs”, argues David Lee, UPS’s VP of Innovation.

But how do we raise a generation of resilient communicators with advanced critical thinking skills, collaborative chops and creative superpowers?

There are no easy answers amidst such uncertainty. But at least part of the answer lies in pushing our children to become deeply comfortable with change.

Our current education systems may be great at imparting knowledge, but even the most progressive ones are struggling to shift to a more flexible model of learning that helps children “feel at home with the unknown”, as Harari puts it.

Although a recent change towards a project-based model of learning in Finnish schools may be a positive sign of what’s to come, it may not be enough.

“At least part of the answer lies in pushing our children to become deeply comfortable with change.”

And if you’re not lucky enough to live in a country like Finland, your child may be stuck in an even deeper rut.

Regardless of where you live, it’s imperative to seek out alternative ways for your child to build up the kind of adaptability and resilience needed to ride the coming waves. For most kids, this will come most naturally and enjoyably through experiences, rather than textbooks.

Volunteering or doing an internship abroad can help make discomfort comfortable. So can studying or learning a new language abroad, immersed in a new culture and in a new way of life.

New people, new places and new ways of doing things can also help unlock creativity by challenging us to see things from the perspectives of others and by helping us to make new connections.

Studies have shown that executives that have lived abroad are more creative and daring, while others have shown that travel can help people problem-solve in unconventional ways. These are all essential skills that set humans apart from machines.

Anthony Goldbloom, a Silicon Valley entrepreneur, puts it this way: “Whatever you decide to do, let every day bring you a new challenge. If it does, then you will stay ahead of the machines.”

It bears repeating that the only constant remains change. Looking a few decades ahead, the possible outcomes are just too many.

And questions abound. Will automation progress far faster than we expect? Will enough new jobs be created to replace all the lost ones? Will rising productivity and economic growth increase wealth so much that there will simply be no need to work in a way we have worked until now? Will the very meaning we ascribe to work change as a result?

We must remain openminded and agile. And if you ask Harari, we also need to leave plenty of baggage in the form of assumptions and illusions behind.

Because when faced with a future which will speed ahead regardless, we will need to run very fast to keep up.

Let’s make sure our children are as ready as they can be.

Tags: Career advice, Job, Parents
Set your child up for future successLearn more
Get the latest on travel, languages and culture in the GO newsletterSign me up