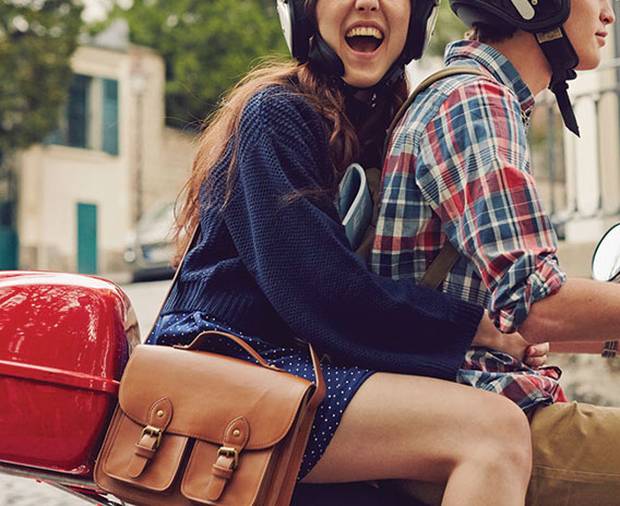 From gestures to food, to art, and, of course, language, Italians are known for being expressive in everything they do. With the help of a few of my Italian friends, I’ve arranged the twelve coolest expressions I learned during my year living and studying in Rome. My hope is that you can use these phrases and my explanations of their meanings to help you better understand the Italian language and the locals who speak it.

The literal translation in English is “to be in the wolf’s mouth.” Italians normally use it when they wish each other good luck, especially before an exam or something important. I used to hear this expression on a daily basis around my University. The common response is “Crepi” or “Crepi il lupo,” which, in this sense, means “thank you.”

This is a sarcastic Italian expression which translates as “You wanted the bike? Now you’ve got to ride it!” It is similar to the well-known English phrase “I told you so.” I’ve heard it in conversation between my Italian classmates talking in the morning after going out drinking the night before. Apparently, Rome has a super fun nightlife scene, who knew?

When Italians say, “Non vedo l’ora,” literally meaning, “I don’t see the hour,” what they are trying to tell you is that they are excited. In that moment, time is of no importance, they just really want to do something, and soon!

In Italy, if you want to say to someone, “You are very intelligent or well-informed,” then you would say, “Essere in gamba,” which literally means “to be in leg.” While this doesn’t translate super well, it’s just good to know that if something is “in leg,” it’s a good thing.

As mentioned, Italians are experts in expression. To that end, they have come up with a series of hand gestures to explain on a scale from 1 to 10 just how frustrated they really are. When you see fingers pinched together waving in the air you may sometimes hear somebody say, “Se io perdo le staffe, tu perdi la testa,” which literally means to lose the stirrups. A more interpretive translation would be that the person lost their temper.

Literally translated as “kill two pigeons with one stone,” this popular idiom might sound a bit barbaric but is actually a fairly common saying across Germanic and romance languages. Italians use it when they want to say that someone succeeded in achieving two things in a single action.

You will hear this expression, which translates as “it doesn’t go with me,” quite often when someone doesn’t agree with you. You can also use it casually as a response to a request when you’d like to say that you don’t feel like doing something. One common situation would be when you want to get rid of pushy vendors on the streets. In that case, you can simply say, “Allora, non mi va,” and politely walk away.

This is a phrase used regularly when someone has procrastinated on finishing a project. Translating literally as “I’m on the high seas,” the meaning is that you still have a long way to go before finishing.

This is a very cute Italian saying used by locals to predict the weather for the following day. Its literal meaning is that if you have a red sunset at night then you’re likely to have good weather tomorrow.

Translated as “not having hairs on the tongue,” this Italian phrase means to be straightforward and to speak your mind directly. Yes, be forewarned, Italians are often quite open and unafraid of saying what they believe to be right.

And, last but not least, one of my favorite Italian sayings. Meaning “Eat well, laugh often, love much,” I don’t think there is any other expression that more completely surmises the Italian way of life. In my experience living and studying in Rome, I discovered and fell in love with the delicious food, melodic language, and beautiful Italian people. It was an experience I will always cherish. I hope you find the same!