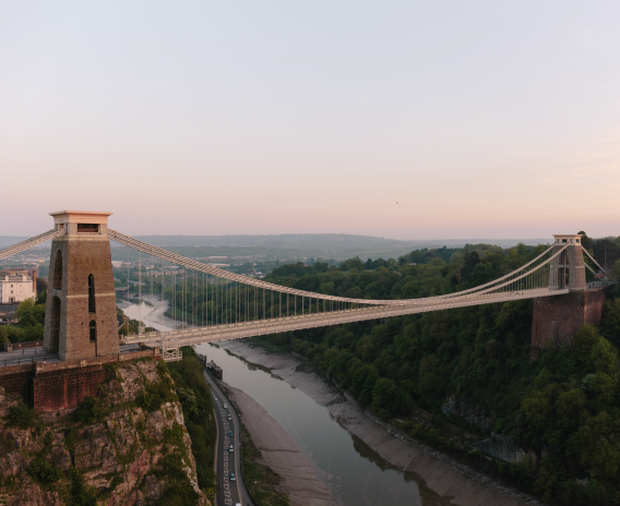 Named as the best place to live in the UK in 2017, Bristol is a port city straddling the River Avon in the west of the country. It’s the birthplace of Banksy, the home of Brunel’s most impressive architectural feats and the hometown of JK Rowling. This quirky and charming city is often described as a happy, lively and arty place.

But just why exactly is everybody living so happily here and why will you love it too? Because you’ll be…

Apart from its title as the best place to live in the UK, Bristol has been handed many other accolades over the years. It’s been voted the best place to study, one of the top five most inspiring cities and even one of the top ten cities to live in the world. The reason for this is clear – Bristol always has something going on. It has all the life of a larger city packed into a more manageable size, so it’s impossible to feel unengaged and uninspired here.

From walking tours to amazing festivals, including Bristol Food Connections, Bristol Pride, Bristol Sounds, and Bristol Harbour Festival, there is always something going on.

Talking of festivals, one of the most important and captivating festivals to attend here is the Bristol International Balloon Festival in August. During this extravaganza, the city truly turns into a perfect picture postcard, and everyone wants to take pictures of the colourful hot air balloons that float above Brunel bridge.

These pictures have now become synonymous with the city, and there’s usually about 100 different air balloons in all kinds of crazy shapes and sizes. The best way to experience this magnificent day is to arrive early to watch balloons rise along with the sun, then stay late to watch their beautiful descent and join in the Nightglow firework finale.

As you walk around the city you’ll be hit by the sheer variety of architecture in Bristol – from medieval to modern, to an architectural style specific only to the area, Bristol Byzantine. Isambard Kingdom Brunel’s Clifton Suspension Bridge is a clear highlight, though. Creator of the first steam engine, Brunel not only revolutionized industry, but he also excelled as an architect. His bridge in Bristol is famous because of its impressive size and dramatic setting.

Once you’ve picniced in the nearby park and gazed at the bridge, go to Bristol’s Museum & Art Gallery. Despite the singular name, this place is actually home to seven galleries in one. Walk up to the second floor and explore the Eastern Art Gallery, French Art Gallery, British and European Art Gallery and more.

And what would Bristol be without Banksy? You’ll find the infamous Banksy paintings using the Banksy Bristol Trial app, including the Girl with the Pierced Eardrum, the Cat and Dog, the Masked Gorilla (and plenty more – he really saw his home town as a blank canvas).

It might look like I’ve made a mistake in the title but, actually, the River Avon literally translates to the ‘River River’, because the word ‘Avon’ is a cognate of the Welsh word ‘afon’ meaning ‘river’. To distinguish this river from the eight other rivers in the UK which hold the same name, this river is sometimes called the Bristol Avon.

Bristol Harbour, or the Floating Harbour as it is often called, is unaffected by the river’s tide due to its lock gates and has become a hang out spot for tourists and locals alike. On a sunny day, the harbour makes for the perfect place to relax and have fun with friends due to its range of cafes, bars and tourist attractions.

Bristol is brimming with intriguing stories – many of which you can hear on the many walking tours on offer. From Princess Caraboo (1791 – 1864), who appeared in Bristol in the 1800s and became the talk of the town because she was speaking a foreign language that no one could understand, to Elizabeth Blackwell (1821-1910) who campaigned to allow women to study medical degrees and became the first woman to have her name on the British General Medical Council’s register.

A more recent example of a local mystery is perhaps the graffiti artist Banksy, who has remained anonymous despite worldwide fame.

7. Hopping on boats and bikes

Take a cruise to Avon Gorge to learn about the local wildlife or hop on a boat up and down the Floating Harbour – many tours come with afternoon tea.

A simple bike ride around the city is also a wonderful way to do some sightseeing, and there’s plenty of places to rent a bike. You could do this alone or on a tour with the Adventurous Activity Centre. If you have problems with your bike, head over to the riverside and stop at Mud Dock, a cafe bar which doubles as a bike repair service.

History-buffs will fall in love with the city due to its wealth of intriguing historical buildings. Bristol Cathedral, for instance, has been standing since the 12th Century and contains many ancient, intricate carvings.

Bristol is also home to Blaise Castle, a 19th century museum and estate with acres of beautifully kept gardens to explore. The house contains everyday Victorian objects for you to peruse, a Picture Room with a classical portico and glass ceiling from the 1830s, and a rooftop so you can see panoramic views of the estate.

If you want to explore more of Bristol’s heritage, you can even download completely free walking tour audio guides to learn more about Bristol’s intriguing history.

Bristol has been called the most artistic (read: hipster) city in the UK. In addition to an incredible art scene, you’ll find Bristol caters to other hipster tastes as well: the foodies will be delighted by St Nicholas’ Markets, the music-obsessed will want to linger at vinyl stores like Idle Hands and Payback, and vintage-lovers should spend half a day at the Old Market. And don’t forget all those independent artists spray-painting the city and hanging out at the Centrespace studio collective – they make the city vibrant and cutting edge.

Though it’s only a city and a county, it even has its own currency, the Bristol Pound, to keep money circulating closer to home rather than getting sucked up by big businesses elsewhere.

Bristol offers plenty of outdoors activities and hang out spots. When the sun is shining, relax in open green space at the Bristol Downs, dine alfresco in a country pub garden or take a walk through the Leigh Woods Nature Reserve.

For that pub garden, you can sit at the White Lion, overlooking the Clifton Suspension Bridge and the Avon Gorge. For that trip to Bristol Downs, bring a picnic and some friends, and maybe a football if you’re feeling like getting active. For your trip to the nature reserve, put on your walking boots and follow these walking trials.

Thinking of spending some time in Bristol? Check out our sample itinerary for more inspiration.

Tags: UK, Culture, Travel tips, Bristol
Study English in Bristol with usFind out more
Get the latest on travel, languages and culture in the GO newsletterSign me up