UK and US: culture comparison 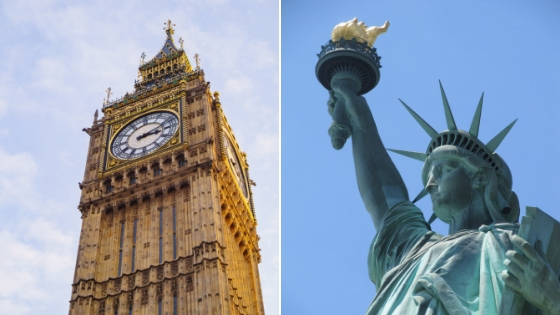 Here at EF Academy HQ in Zurich, we have team members from all over the world. This week, we’ve put Rebekah from the UK and Sara from the US head-to-head to discuss the culture of their respective countries. On today’s list, we’re discussing food, language, holidays, music, and education.

Rebekah: Obviously the full English breakfast is quite a big deal in the UK – sausages, fried egg, bacon, beans, hash browns and black pudding (I’ll leave you to google that last one…). Other well-known highlights include fish and chips, tea and cake and a Sunday roast beef dinner. Lesser known are delicacies such as toad in the hole, which is sausages in yorkshire pudding batter, and stargazy pie, which is topped with pastry and fish heads which gaze upwards*.

Sara: There are all kinds of incredible foods that we love in the US! Home of key lime pie, fajitas, and L.A. fav chicken and waffles. Not to mention a plethora of tasty junk foods like Cheez-Its and Pop Tarts. I’ve heard we also have a pretty good candy game with Reese’s and M&M’s in just about every flavor you can imagine. But most of all – tacos!

Rebekah: In England, you’d head out for a walk in your trainers, slip on a jumper if it’s cold, and if you want a pudding, you could have a good old fashioned slice of Victoria sponge cake. Other than some different words, we’ve also got a few different spellings – we kept the U in colour and where you might use a Z in America, you would probably use an S in England (example: realised vs. realized). We also have a whole accent named after the Queen: The Queen’s English.

Sara: In the US, we head out for a walk in our sneakers. If it’s cold outside, we put on a sweater. And if we want a sweet dessert, we might reach for a cookie and when we discuss eating a pudding, we’re probably thinking about the instant Jello kind. American English also has an interesting reputation for our spelling choices. For some odd reason, we dropped the U’s on words like “color” and “humor” but love to use Z’s (maybe we think it looks cool)!

Rebekah: I’m not sure we can rival America’s Groundhog Day (which sounds bizarre but very fun) but we do have some unique holiday traditions in England. The day after Christmas is ‘Boxing Day’ which dates back to the 1830s where post-men and errand-boys were gifted a Christmas-box to thank them for their service. More recently, Boxing Day is celebrated with family and often marked with a country or coastal walk. We also celebrate the Queen’s birthday and royal weddings.

Sara: In the US, we have loads of holidays that are somewhat bizarre. One such example is Groundhog Day, where a small rodent pops his head out of the ground to help predict the weather. Everyone wears top hats, it gets pretty fancy and in some areas, it’s a huge part of the culture. North Americans also love Thanksgiving – a day where family and friends come together to talk about everything we’re thankful for and eat way too much of our favorite comfort foods.

Rebekah: Home to The Beatles, Elton John, Amy Winehouse and The Spice Girls – the best-selling female pop group of all time – The UK has always had a thriving music scene. While in recent times, much of British music has been influenced by American popular culture, there are still some genres that are British through and through. Each of the four countries of the UK have their own distinctive folk music traditions. The Irish have their fiddles, the Scottish love a ballad, the English enjoy music with a medieval feel and the Welsh favour male voice choirs. The folk genre in the UK remains popular, and has experienced revivals in the 19th, 20th and 21st century.

Sara: A number of brilliant artists and genres have called the US home over the years. Some of the genres the US can boast include rock and roll, rhythm and blues (R&B), and country. With one of America’s most credited genres being jazz, which has its roots in New Orleans, Louisiana. This gave way to popular artists like Louis Armstrong, Elvis Presley, James Brown, Michael Jackson, and Whitney Houston and more contemporary artists like Lady Gaga, Ariana Grande, and Meghan Trainor.

Rebekah: In the UK, children must attend Primary School from age 5 – 11 and Secondary School from 11 – 16. After the age of 16, further education is optional. Students between the ages of 16 – 18 can choose to attend Sixth Form where they will study A-Levels or IB in preparation for university. Or they might choose to attend a college and begin learning a profession. The UK is also home to the top two universities in the world: the University of Oxford and the University of Cambridge. It’s also a great believer in the boarding school tradition with around five hundred boarding schools spread out across the UK.

Sara: The US school system starts with Primary School, where students must attend from the age of 5. Around 12, students move on to Middle School where they study for a couple of years as a sort of cultural transition between Primary School and High School. At 14, students begin attending High School and usually graduate by the age of 18. Students can enter college or university upon graduation from high school and they can also choose from a variety of trade schools. The US is home several of the top universities in the world including Harvard, Stanford, Massachusets Institute of Technology (MIT), and the University of California, Los Angeles (UCLA).

Wondering which location would be right for your studies? Learn more about studying in the UK or US for high school with EF Academy.