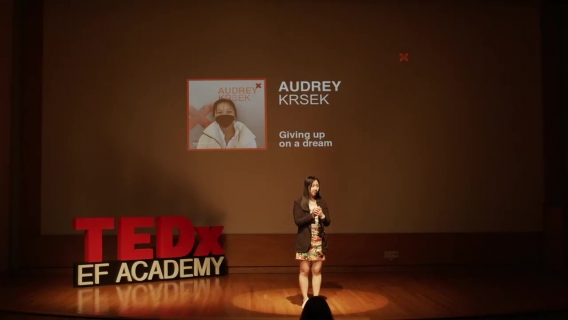 In February 2021, EF Academy New York held a TEDx conference on campus to talk about issues around the theme of ‘Thinking through perspectives.’ Student Audrey K. gave this speech about giving up on a dream.

I want to talk about having a dream, then giving up on that dream. It was one of the best decisions I’ve ever made.

7:00 am Mammoth Mountain, California. I’m carrying my two pairs of skis to the chair lift. The wind is blowing at 40 mph. My nerves are like exploding butterflies. I wait at the start, watching my competitors go. Ten seconds later, five, four, three, two, one… Go!

In almost a blink of an eye, I cross the finish line. I grab my dad’s phone to check my ranking. I’m at the bottom again. I go home, slam my door, and disappear into a pile of blankets.

I grew up near the Nevada mountains. I was given skis, a helmet, and boots from my parents at age three. The feeling of sliding down the hill on two metal rods was irresistible. Even though I was only three, I knew I wanted to ski my whole life.

When I was seven, we bought a condo in the mountains at a place called Northstar, only a couple of hours away from home. I joined the Northstar ski team and I loved it. I loved the colorful walls of the ski lodge, the smell of wet carpets from the snow that fell off of our equipment, the taste of the goldfish, animal crackers, gummy bears, and hot chocolate on cold winter days, the feeling of a successful day on the hill, and the big hug I got when my parents picked me up.

Northstar had short race courses for anyone to ski. I skied the courses so many times, I earned little medal pins. But I thought, “I want to earn real ones one day.” So, I moved up to the race team.

My competitors constantly took home medals, but they lived only a couple minutes from the mountain, and raced almost every day. So, around age ten, I asked my parents if I could move to Northstar to race full time. They agreed!

I wanted to be in the winter Olympics, being cheered on by millions.

I raced five days a week, seven hours each day. I skied from 7:00 am to 3:00 pm, then did my school work, ate, and went to bed. This grueling schedule consumed me.

My parents never put pressure on me to win. I did this all on my own. There were about 150 competitors at each race, which happened every two weeks. The really good racers placed in the top 30 consistently. I was placing in the ’50s.

For the next two years, despite my effort, I wasn’t getting worse, but I wasn’t getting better. It felt like for every step I took, my competitors took five. I didn’t know what was happening. What was I doing wrong?

Then, it was summer. I moved to the Squaw Valley Ski Team. This was the real deal. Most of the good racers were on this team. My summer consisted of working out and skiing wherever snow was. My new team was hard to adjust to. They all knew each other from grade school, and I was the new one. After a while, I just decided to focus on myself.

But I realized I was more and more nervous to race. I raced as usual, but mentally I was scared. The event I disliked the most was super: racing down the hill as fast as you can, while flying off jumps. This freaked me out. But I was a ski racer, I should be wanting to go as fast as I could, but I didn’t. At races, I was so nervous that I skied terribly, and placed even worse. Every coach said the same thing. “There are two Audreys. The one that is on fire when she charges and the one who holds back.” I wanted to be the Audrey that charged. I wanted those good results.

So we made an appointment with a sports psychologist.

She had a smile, and a soft voice. I told her I wanted to be the best, but I was scared to get injured. So, she taught me breathing techniques, how to visualize, and use imagery. She asked me, “would you rather take the risk and possibly win? Or take no risk and stay where you are?” I chose risk. She gave me a journal to jot down whenever I felt nervous, and used breathing techniques to help. How to breathe for more energy and how to wind down when I was nervous.

I would sometimes bring my boots and poles to the appointment. I would put my boots on, grab my poles, and imagine myself racing down a course. I felt myself getting nervous, even though I was still in a warm, safe office. This was the power of imagery. I pushed off my poles, and charged down the imaginary course. We did it again and again, and it was working. After each appointment, I felt myself getting more and more ready.

A month later, I had qualified for regionals, the event that all ski racers want. If you succeed there, you go to nationals. I was happier than ever. I had made my goal.

Regionals were held at Schweitzer Mountain, Idaho. I placed near last in all three races. I thought I would be upset, but I really just wanted to go home. It wasn’t fun anymore.

I debated. I had put seven years of my life into this, but I wasn’t happy anymore. I had beaten my fear, but lost my passion, and if I continued I would be on the road to pursuing a career in it.

I told my parents I would like to retire from ski racing. They were not upset at all. The dream I had dreamed since I was three years old… was done. And it was okay.

The more I think about it, the more I realize how much racing has made me who I am today. I use breathing techniques on a daily basis. I’m an expert at time management; I will rarely procrastinate school work. I know how to deal with difficult people. I have skied through blizzards, and traveled the world. I will never get to the Olympics, but I can do just about anything.

Ski racing has made me realize just how important a person’s mentality is. I had the physical ability to continue and make ski racing into a career, but mentally I was done. I gave up on my ski racing dream. It was one of the best decisions I have ever made. Because what I did not give up on, was myself. Thank you.