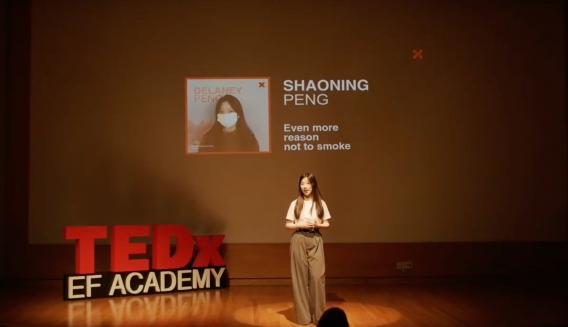 In February 2021,  EF Academy New York held a TEDx conference on campus to talk about issues around the theme of ‘Thinking through perspectives.’ Student Shaoning P. gave this speech about why you shouldn’t smoke.

My father is always coughing; a deep cough, like a cat in his throat that wants to rush out. He keeps silent with red eyes and tries to get over his cough. And every time I hear it, I feel distressed, but for my father, this has been the norm in his life for 30 years. He always has a burning cigarette in his right hand, and a full, yellow and black ashtray on the table. The smoke drifts towards me and I am a little uncomfortable, especially my eyes. Looking at the ceiling above his chair, there are some gray spots.

I hate smoke. I tried to persuade my father to stop, to tell him the dangers of second-hand smoke, so maybe he would feel sorry for me and my mother and then quit smoking. So he did stop smoking… but only in front of me. He would hide in the kitchen, corridor, garden, bathroom. It’s like a three-year-old kid secretly eating sweets, in the bed, under the table, in a place where his mother can’t see. Later, I even threatened him with love: If you love me, then you don’t smoke. If you smoke, it means you don’t love me. I cried, screamed, and became hysterical, but it was useless. Every time a cloud of cigarette smoke rises, I feel it is pulling my dad away from me step by step.

Cigarette smoking causes more than 480,000 deaths each year in the United States. Compared to China with a total of 315 million smokers. It is predicted that in the 21st century, 200 million people will die from smoking in China. Over 7 million people die from smoking every year around the world, which is every six seconds, a person dies because of smoking. In fact, this includes 900,000 second-hand smokers. While you smoke, there are 7,000 chemicals burning. But that is not the worst thing about smoking.

We all know radiation is scary, including my father. One year, I was very fascinated by the Chernobyl nuclear power plant accident. I watched various movies, TV series, documentaries, and even found some travel diaries on Youtube. When I was talking to my father, he lit a cigarette and said, “Are those people stupid? Don’t they know radiation is very dangerous?”

In my biology class, I learned in a new way how dangerous radiation can be. What do you think is the most radiated thing in the world? Doctors working in the hospital? Employees working in nuclear power plants? Astronauts in space? None of these. It’s the lungs of smokers, getting twice as much radiation per year than astronauts.

There are even more reasons not to smoke, especially if we let the people we love know that we want them with us forever.