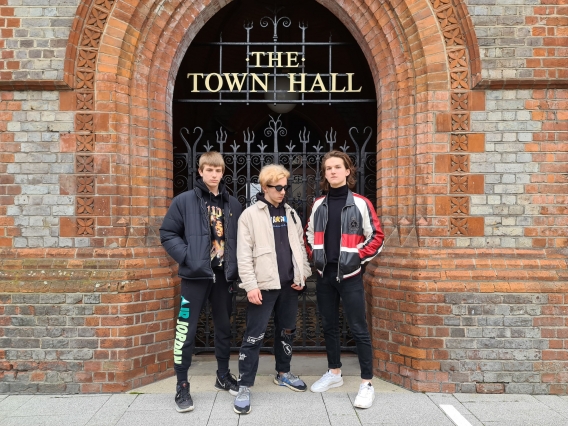 As part of the International Baccalaureate (IB) Diploma, students must develop a project related to Creativity, Activity and Service (CAS). Read about how three EF Academy Oxford students turned their project into an opportunity to better their campus and received the support of the whole school community.

During the global pandemic, thousands of people have suffered from mental health issues due to the sense of instability in the world, lack of social interaction, distance from relatives and friends and many other restrictions. We have had to sacrifice exercising and activity in order to protect our community, and as a result of that our physical health was at risk as well.

All of the modern-day struggles listed above have affected students. After we realized this problem, we came together to form a small group with the aim of finding a solution for our Corona-related struggles.

We thought up many ways to improve our predicament, but none of them seemed to be quite effective enough until we took a step back and thought about the most fundamental way to boost morale: There is no better way to distract oneself from negative thoughts than to focus on something productive and beneficial for the mind and body. This was exactly the time when we were struck by an incredible yet simple idea: Our campus needs a gym!

Our next step was to do some research to confirm that our efforts would be successful. We discovered a range of different studies that indeed prove the positive effects of working out on both physical and mental health. “Exercise improves mental health by reducing anxiety, depression, and negative mood and by improving self-esteem and cognitive function. Exercise has also been found to alleviate symptoms such as low self-esteem and social withdrawal” (from an article in Prim Care Companion J Clin Psychiatry. 2006). Later, to find out if the students of EF Academy Oxford were just as keen on the idea of having a free-to-access gym on campus, we executed a survey asking for their opinion. The results were stunning: 100% of respondents answered “YES! Great idea” and almost 50% claimed that they would use the facility seven days a week!

Having confirmed that having a gym on campus is a concept that appealed to everyone (we also interviewed the Student Council, teachers, boarding team, Pathway Managers and CAS advisors), we decided to turn our vision into a CAS project that would benefit the whole school community by bringing together staff and students with a goal of becoming better versions of themselves.

We began our work on the project by finding out the basics of setting up a small gym. Then, we outlined a plan of the future gym, found the best location for it on campus and made a list of the necessary equipment. Each of those aspects we discussed with the available experts to collect more data on the subject, get valuable insights and, as a result, bring it to life as soon as possible. The best location was chosen after talking to gardeners, the concept of the structure of the gym was suggested by the school’s builder, and the the most functional pieces of equipment were selected with the help of teachers with rich experience in sport and fitness. After preparing the plan, we presented our project to our Head of School. His approval and support was a great honor for our team!

At the moment we are still in the planning stage, but we are extremely passionate about our project and the idea of helping our community, so we are excited to begin the work and open our school gym in the near future!

Written by Nikita, Filip and Kirill