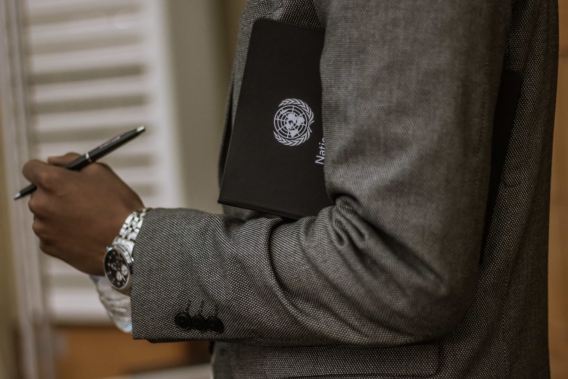 The President of the MUN team commented,“The EF MUN team had a great start to our season with our three wins at Fairfield. The conference allowed us to get back in the swing of things. Delegates were finally able to put their debating and negotiating skills into action. Fairfield was a great success and a sign for more great things to come”.

Model United Nations conferences look to simulate the challenges our world leaders face in the present day. Each delegate takes on a role as a leader of one of the nations represented in the United Nations. At the Fairfield University conference, Ms. Adeyemi represented King Abdullah of Jordan. The students were tasked with solving the Israeli-Palestinian conflict and representing the views of their role.  Ms. Adeyemi had to balance the interests of Jordan and support of the Palestinian community with the country’s need to work closely with its neighbor, Israel.

At Princeton University, Ms. Adeyemi represented the Democratic Republic of Congo and the African Union. The group worked together to try and combat Boko Haram and worked to increase women empowerment in the region. At the end of each conference, the group had to conclude with a resolution paper to be voted on by the full assembly.

Ms. Adeyemi reflected on the experience as a great opportunity to learn how the United Nations functions and increased her awareness of international issues faced by world leaders each day. The students who attended worked with students from all over the region to try and come up with solutions to these persistent problems.

“Fairfield University was my first ever Model United Nations experience and it was an exhilarating experience that I enjoyed thoroughly. Model United Nations is quite an intense experience I was on the Isreali-Palestine committee, so the tensions were high between supporters of both parties. At first I felt quite overwhelmed; a lot of the people there were very experienced. But a while into the conference I began to feel more confident and I raised my placard up to speak. I did my best in raising issues that over delegates might have overlooked with the support of my fellow EF Academy delegates in my committee. Eventually I emerged Honorable Delegate in my committee with my chair even citing that I was his favorite delegate. I had to admit I was pleasantly surprised and elated at the same time. Our collective performance as a team is quite impressive and the EF Academy Model United Nations club is out to excel!”