Earlier this month, the other IB year one students and I completed the Group 4 project. This is an activity where groups of five students taking Chemistry, Biology, or Physics work together on an investigation. The topic and nature of activity vary from year to year. This year, the general theme was Intelligence Diagnosis, where we were tasked with diagnosing a patient in a made-up scenario based on a backstory and set of symptoms he or she was experiencing.

The project itself culminated in a 30-minute presentation during which we had to touch on each branch of science, featuring our diagnosis and possible solutions. Surprisingly, the true challenge we faced was not diagnosing the patient, which only took about an hour, but in fact, communicating the necessary knowledge from other branches of sciences to the other team members who were unfamiliar with the subject-specific terminology.

My team was presented with a patient named Denise who was 13 weeks pregnant and worried about complications with her blood type. After preliminary research, we concluded that there was a likelihood of incompatibility between her blood type and the type of the child she was carrying, resulting in a disease called Hemolytic Disease of the Newborn (HDN).

I study Chemistry and Biology, so had a grasp on the mechanism of this disease. The other biochemists on the team and I were able to explain how this disease works on a biological level to teammates who are studying different subjects like Physics.

These teammates were able to return the favor for me. I have never set foot in a Physics class in my life, so the concepts of MRI, Doppler Ultrasounds, and other Physics-heavy materials were lost on me. We all had a hilarious time desperately attempting to explain advanced scientific concepts using everyday analogies with each other.

To bring even more context to the activity, several experiments that connected to our patient’s disease were conducted in the lab throughout the day in order to give us a better idea of how a situation like this could be solved in a real-life setting. There, we discussed different methods of conducting protein assays such as UV spectroscopy and gel electrophoresis in order to further diagnose the symptoms we were presented with.

Although quite challenging at times, my group ended up with a great presentation on our disease. And though it was never confirmed by the architects of the activity whether we were correct in our diagnosis, we all learned a lot. Not only about the sciences we don’t actively study, but also about communication in a group dynamic. We will undoubtedly use these lessons in our future endeavors, no matter what they may be. 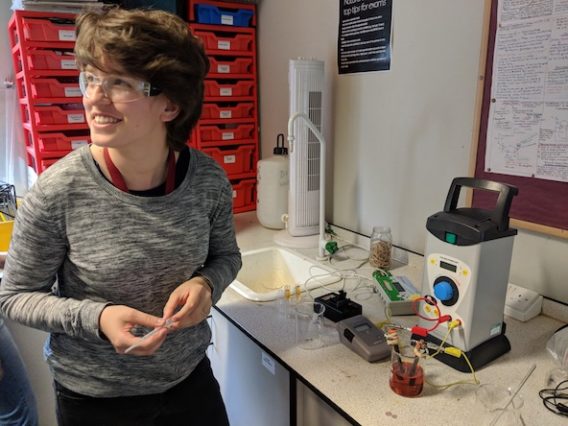