11 movies about New York (and why you should watch them) 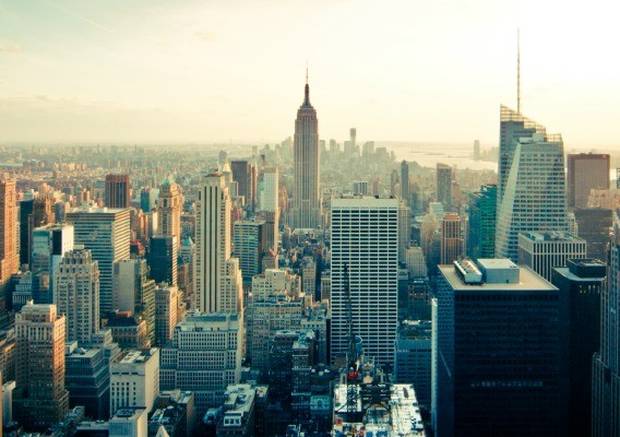 For decades, the hustle and bustle of New York City has been providing the perfect backdrop for movies, no matter the topic or the budget. We selected a few gems that make the city look like a true silver-screen superstar: some of them want to make you book a ticket immediately, others inspire you to follow your passion no matter where you are or gently remind you to not mess with ghosts and monsters. All of them will give you a glimpse into the hopes, dreams and fears of New York’s inhabitants (and help you improve your English skills in the process!).

1. Do the Right Thing

It’s the hottest day of summer in Brooklyn, and an argument in a pizza parlor ends with racial tensions and tragedy. Do the Right Thing is continuously ranked among the best movies, and it has all kinds of awards to prove it. The film definitely hasn’t lost its power: sadly, racial tension and police brutality continue to be a relevant topic – in New York City and beyond.

Every New York-inspired movie list needs at least one Woody Allen film, and we picked one of his most famous ones: Manhattan, a romantic comedy-drama that tells the story of a television writer and his rather interesting dating life. It’s a movie about finding love and happiness in a city where everything seems possible – and is served with a side of melancholy.

This is one of the greatest movies of all times, so it’s a must-watch. Just be prepared for an intensive story about crime, violence, and alienation – told through countless memorable lines full of words that might make you blush. Robert DeNiro’s Travis Bickle, a Vietnam vet, spends his insomnia-plagued nights as a Taxi Driver and meets people who keep pushing him further down the rabbit hole of depression, anger, and aggression.

Few things beat New York City during the holidays, so the list naturally needed a (very entertaining) Christmas movie: Elf tells the story of Buddy, a non-Elf (aka human) who was raised by elves. Buddy realizes that he’s somehow different and decides to travel from the North Pole to New York City to find his human parents. Even though the film oozes Christmas cheer, it can and should be enjoyed even when it’s not the season to be merry.

This is a true comedy classic – and there’s a sequel scheduled for next year: three parapsychologists start a paranormal extermination and investigation business – The Ghostbusters – and try to save New York from, well, ghosts. There’s goo, a giant Marshmallow Man, and a theme song that you’ll not get out of your head for weeks. If that doesn’t convince you, then I have two more words: Bill Murray.

Now, let’s talk about a classic of a different kind and a branding dream come true for any company: Breakfast at Tiffany’s is a timeless romantic comedy about a small-town girl who’s looking for adventure, love, and money in the big city. Audrey Hepburn’s character is adorable, quirky, and neurotic. There’s also cat named Cat and so much iconic fashion that women around the world are still looking at Holly Golightly for fashion inspiration.

Bud Fox, a young stockbroker becomes involved with Gordon Gekko, a ruthless corporate raider. For the next two hours, we can watch what happens when people are motivated by greed, get tempted by wealth and flirt with more power than they can handle. Wall Street dramatically portraits the excessive 1980s and questions the price of dreams. In 2010, a Wall Street sequel came out – complete with Gordon Gekko and greed 2.0.

Since the movie asks the ultimate question – if women and men can be just friends – it’s an always-relevant piece that continues to make people analyze their own friendships and romances. Harry and Sally’s friendship starts while they’re both moving from Chicago to New York, and they keep meeting in different neighborhoods over the years – including Katz’s Deli where they serve that world-famous “I want what she’s having” -sandwich.

With over 8 million people living in New York, there are countless stories that could be told. New York, I love you packs eleven of them into – you guessed it – eleven short films. There’s a storyline and a famous actor for everyone’s taste, so it’s the perfect movie to get a feeling for the city – or to get all homesick and book a flight to New York immediately.

10. Die Hard with a Vengeance

The Die Hard series is made up of five action movies, and we picked number 3 because it’s the most New Yorkish of them all. On one side, we have Bruce Willis’s character, a currently suspended cop who’s separated from his wife but very close to anything alcohol. Then, there’s Simon, a mean German who’s really into “Simon says”-riddles and likes to blow up things. It’s good (and slightly drunk) against evil – complete with a lot of quotable one-liners.

It’s not all just about love, money, and fashion in New York – the city’s famous skyline regularly gets taken over by aliens, ice sheets or monsters. Cloverfield captures, on what seems to be a handheld video camera, what happens when five New Yorkers meet a monster that attacks Manhattan. We don’t want to give anything away, but get ready for a lot of screaming, running and shaky camera footage that might make you dizzy, but we promise it’s worth it.

Tags: Culture, US, New York, Movies
Experience New York with usLearn More
Get the latest on travel, languages and culture in the GO newsletterSign me up