10 things we bet you didn’t know about New Zealand 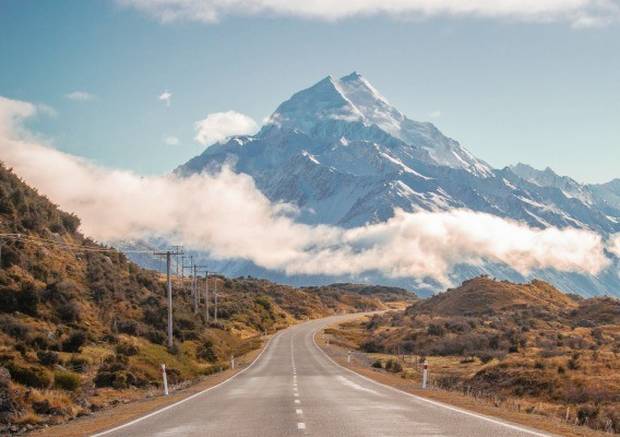 A hobbit wonderland, a bungee jumper’s paradise and the home of the haka dance danced by the rugby team – three things most people know about the other country “Down Under”, New Zealand. But there’s so much more that stands out about this gorgeous outpost in the far corner of our globe.

Here are 10 things that you probably didn’t know about New Zealand – kudos if you did – and that will probably make you want to pack your bags and book a (long) flight over right away:

The Māori name for New Zealand – Aoetaroa – means ‘land of the long white cloud’. There are various explanations for this name, most rooted in traditional Maori stories, but all somehow linked to the idea that the horizon in New Zealand is often covered in long, white clouds. They country’s also the shape of a long cloud when seen from space (but maybe that’s just a coincidence).

2. There are way more sheep than people

New Zealand’s a sparsely populated country. Geographically it’s close in size to the UK, but its population is only 4.47 million (compared to the UK’s 64 million). And what’s more – sheep far outnumber people: There are about six sheep for every human in New Zealand; it’s one of the highest ratios in the world.

3. Beaches are never far away

Beaches in New Zealand are never more than a quick daytrip away – in fact, no part of the country is more than 128km away from the ocean – so you could easily ski AND surf in one day.

4. It was the last frontier for humans

Humans – Homo sapiens, to be exact – started off in Africa, moved on to Europe and Asia, North America, Australia and finally New Zealand, only landing there approximately 800 years ago – that’s tens of thousands of years later than most regions of the world. Gives a whole new meaning to remote, doesn’t it?

5. It used to be home to a monstrously big bird

If you like your birds big, New Zealand’s your spot. Although extinct, giant Moa birds were native to New Zealand – they were 3.6 meters tall and weighed a whopping 230kg.

The farthest corner of the world was also the most progressive: New Zealand pioneered women’s rights long before countries like the US and the UK, and became the first country in the world to give all women the right to vote in 1893.

7. It’s a haven for nature lovers

Think New Zealand and you probably think of nature. Not only is the country full of magnificent mountains and beautiful beaches, but more than one-third of the country is actually protected nature reserves, ensuring that the country will stay pristine for decades to come.

8. It’s the land of kiwis (people, birds and fruit)

Why do people throw around the word “kiwi” when talking about New Zealand? Well, it so happens to be the name for that furry fruit you buy at your local supermarket (chances are it was grown in New Zealand too!), a bird native to the country AND an affectionate nickname for the country’s people. The kiwi was first just the name for a flightless bird native to the country and became the name for the fruit when some marketing folks realized its original name – Chinese gooseberry – wasn’t going to sell and so named it after the bird. It’s also become a slang word for New Zealanders, making the whole thing even more confusing!

A small city called Gisborne is the first in the world to see the sun rise over the horizon in the early part of the year (after that the tilt of the planet moves this point further North) – it’s only 496.3 km away from the International Date Line at 178° latitude.

Some of the biggest blockbusters of the last years have been filmed in New Zealand, from The Lord of the Rings trilogy to The Hobbit, King Kong, The Piano, The Last Samurai and Whale Rider. The stunning nature and creative, laid-back locals make it an ideal place to film.

Tags: Travel tips, Fun facts, New Zealand
Experience New Zealand with usLearn More
Get the latest on travel, languages and culture in the GO newsletterSign me up