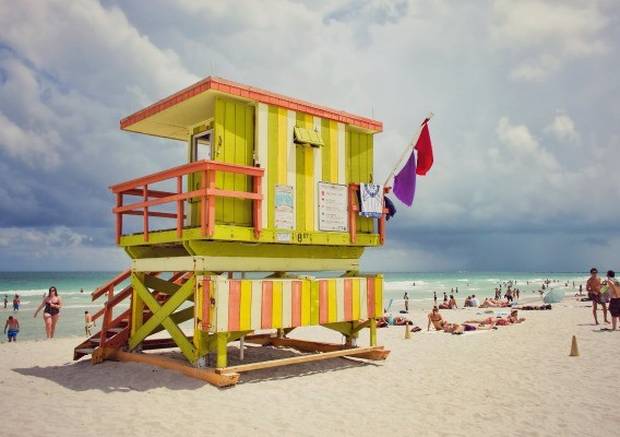 You’ve never been anywhere like Miami – fact. Known as the “Magic City”, Miami boasts a unique and exciting mix of hip urban culture, laid-back seaside vibes, and Latin and US traditions.

Although we could go on and on about this magical city, we decided to narrow it down to these 10 reasons to love Miami.

1. The beaches are world class

There are few beaches in the world that can compete with Miami’s sandy shores. The city’s miles of pristine coastline conjure up all kinds of activities; you’ll find beach volleyball games, outside gym classes and, of course, the most gorgeous sunbathing spots you’ll ever experience. There are beaches for all occasions: pet-friendly, BBQ-ready, and ones that host parties once the sun goes down. People watching at South Beach is never a waste of time, nor is rollerblading and biking along Ocean Drive. Whatever your dream beach activity is, Miami has you covered.

In Miami you can eat the most scrumptious Latin American cuisine every night of the week. You’ll get to taste the best Cuban dishes outside of Havana and drink cup after cup of Cuban coffee – and, of course, Cuban cocktails. You can also discover traditional cuisine from across the Caribbean and Latin America. Dishes you thought you knew are given twists distinctive to particular nations. Empanadas, for example, will vary depending on whether you head to a Colombian, Ecuadorian,  Argentinian or Puerto Rican restaurant.

Like everything in this city, a night out in Miami is an experience that is distinctively Latin, with an American flavor, of course. South Beach, in particular, is home to some of the most famed nightclubs in the world with the biggest DJs playing sets that are guaranteed to get you dancing. Traditional Cuban music can be found in bars all over the city, and you don’t have to look far to discover a lively bar or ten. In Midtown and Wynwood, you’ll find your fill of trendy, hipster hangouts while Downtown Miami is home to the city’s oldest bars.

4. The sun’s shining year round

Life in Miami is powered by the sun. There’s no need for a winter coat here; in fact, you can get rid of all your jumpers. Miami is blessed with warm weather basically all year round, meaning beach days are pretty much every day. A raincoat may be required to see off the tropical storms that can occasionally sweep in during the hurricane season (June to November) but, even then, the temperature rarely drops below 20 degrees.

5. The nature’s wild and wonderful

Miami is nestled between two national parks – the only city in the US to boast such a claim. To the west, you’ll find the Everglades: a swampy expanse of subtropical land that’s perfect for wilderness adventures. The park is home to a number of hiking and biking trails that are ideal for working off any over indulgence that occurred in Miami. With an estimated 200,000 alligators, the park really does put the wild into wildlife. Canoeing through Nine Mile Pond and enjoying the sweeping vistas from Shark Valley are two of the best ways to spot wildlife there.

Biscayne National Park protects the mangrove forests and the waters of Biscayne Bay, including America’s only living coral reef. Visitors can explore the park by snorkelling and canoeing or by camping on subtropical islands. Scuba diving through Florida Reef is an excellent way to view this incredible underwater ecosystem.

Miami is known as the Capital of Latin America for a reason. You might be in the USA, but it feels unmistakable Latin; it’s closer to Havana than it is to Tallahassee, the state capital, and it’s home to one of the largest Hispanic populations in the US. As a local saying goes: “The best thing about Miami is how close it is to the United States.”

7. It’s all about healthy living (and looking good)

Miamians take healthy living seriously. Locals know that the beach is not just a place to relax but also a year-round gym that’s perfect for showing off. They will leave you wondering how it is possible to look so cool while running in 35-degree heat: don’t question it, it’s a Miami thing.

Fashion is also a serious business here with everyone dressing to impress; whether heading to grocery shops, meeting friends in SoBe or going to work, locals never miss a chance to glam up.

It’s only right that a city with such an awesome coastline has equally awesome water-based adventures. After chilling out on the beach, you can get your adrenaline pumping on the open ocean by speeding across the waves in a speed boat or jet ski. You can take it down a notch by snorkelling or scuba diving, where you can explore shipwrecks and Miami’s varied marine ecosystem, or use the elements to windsurf along the coast.

From the art deco buildings that adorn the beachfront, to the ever-expanding number of galleries and the street art of Wynwood Walls, Miami is alive with art. Miami Beach’s Art Deco district is practically an open-air gallery and the city also hosts Art Basel Miami, a leading contemporary art event.

Miami might be one of the craziest places on Earth, but it’s easy to change the pace and escape to some wonderfully secluded spots along the Florida coast. For some laid-back island vibes, head to the Florida Keys, America’s most southerly spot, and relax on idyllic beaches far removed from the non-stop hustle of Miami. Alternatively, if you know where to look, you don’t have to take a trip to the Keys to find your own slice of Miami calm: Virginia Key is a short drive from central Miami and boasts breathtaking, picture-perfect beaches.

Tags: Travel tips, US, Miami
Study English with us in MiamiLearn More
Get the latest on travel, languages and culture in the GO newsletterSign me up