10 weird and wonderful facts about the Brooklyn Bridge 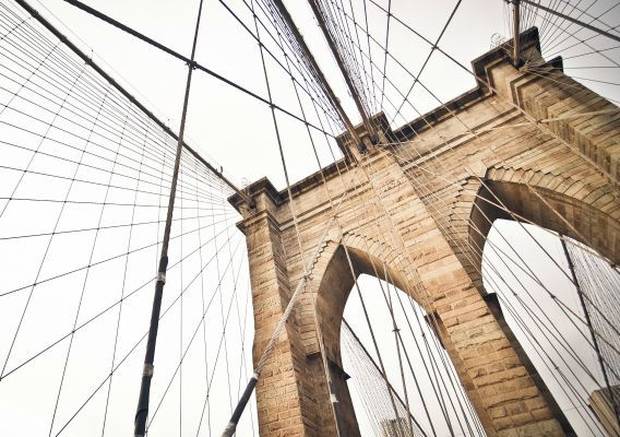 The Brooklyn Bridge is not only one of the engineering marvels of the 19th century and a must-see/must-photograph spot when visiting New York – it’s also up next in our series on fun landmark facts to impress, delight, and win trivia night with.

After 14 years of construction that cost $15 million, the Brooklyn Bridge was opened in 1883 – and Manhattan and Brooklyn were finally connected. It took over 600 workers to transform 6,740 tons of material into the iconic wonder of the Industrial Revolution. The bridge is supported by four cables, each 3578 feet (1090 m) long, 15.5 inches (40 cm) thick, and made up of 21,000 individual wires.

The Brooklyn Bridge was the first steel-wire suspension bridge, and at the time it was built, its 1,595 (486m) feet main span made it the the longest suspension bridge in the world. In 1903, the neighboring Williamsburg Bridge broke that record by 4.5 feet.

The construction of the Brooklyn Bridge took its (human) toll – there are no exact numbers, but at least 20 people died building the architectural masterpiece. It started with the designer, John A. Roebling, who crushed his foot and had to amputate his toes, which lead to him dying of tetanus shortly after. Numerous workers fell off the bridge, were hit by debris or got caisson disease – a decompression sickness that paralyzed the workers, including Washington Roebling, the son of the bridge’s designer.

Washington, who was in charge after his father died, was bedridden due to his illness and had to lead the construction without physically being there. All of this was possible because he had a kick-ass wife, Emily Warren Roebling, who ended up being the perfect assistant chief engineer and pretty much took over everything Washington couldn’t do during the remaining 11 years of construction. Because Emily played such a crucial part in building the Brooklyn Bridge, she was the first person to cross it on opening day.

Even after the bridge opened, the tragic deaths didn’t stop: On Memorial Day of 1883, a woman’s heel got caught in the planks of the pedestrian promenade – she started screaming, leading the people around her to believe that the bridge was about to collapse. Panic ensued and 12 people were trampled to death on the stairways, while many others were injured.

The stampede incident made people wary, and there was only one solution to ensuring the public that the Brooklyn Bridge would not collapse: In 1884, Jumbo, a seven-ton elephant, and his 20 elephant friends left their circus tent and went on a casual walk from Brooklyn to Manhattan. The parade across the Brooklyn Bridge was a proverbial walk in the park – people were happy, the elephants had quite the story to tell, and the circus got the promotional stunt of a lifetime.

The Brooklyn Bridge is a busy place – there are over 100,000 vehicles crossing it every day. Since the bridge is one of New York’s many great photo ops, let’s add 4,000 pedestrians and almost 2600 bikes to the daily traffic volume.

Inside the foundation of the bridge, on the Brooklyn side, the original plans included a shopping arcade, the Brooklyn Bridge Anchorage. It didn’t quite work out and the space ended up being used for various art exhibitions before it was closed for security reasons in 2001. Right below the space for the arcade are vaults that were once rented out as storage space for wine and champagne – it was literally the coolest (temperature pun intended) wine cellar – and it helped finance the bridge. In 2006, city workers discovered a Cold War shelter in one of the vaults on the Manhattan Side of the bridge – complete with medical supplies, blankets and over 300,000 packs of (expired) crackers.

And now it’s time to meet the tenants of the Brooklyn Bridge: Peregrine falcons regularly use the two towers as their nesting place – talking about a room with a view. Lucky visitors can observe the coming and going of the birds, so keep an eye out while taking those selfies.

Tags: Travel tips, US, New York, Sightseeing
Study English with us in New YorkLearn More
Get the latest on travel, languages and culture in the GO newsletterSign me up