Helping Nepal through The Suit Project 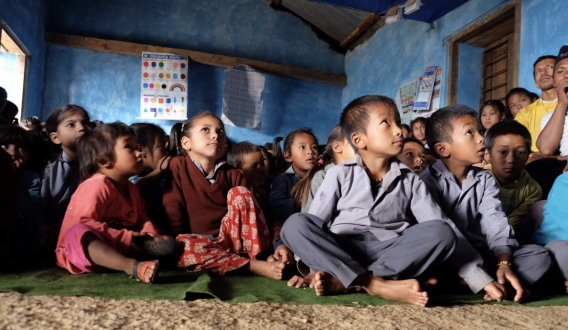 One of the benefits of an international education is the global perspective that students are encouraged to embrace. Audrey is currently a Grade 11 student at EF Academy New York, together with her father she started The Suit Project in order to help the Shree Bhanu Basic School in Nepal raise money for locally made tracksuits for the students. Read on to learn more about the project and about the critical situation in Nepal.

Tell us a little bit about yourself:

Hi EF Academy community. My name is Audrey, I just turned 17 and I’m from California. I’m a junior at EF Academy New York; this is my second year.

How did the idea for The Suit Project come about?

My dad has been to Nepal multiple times. I have not, but I would like to. While he was there, he saw many schools with little to no access to basic necessities, such as pencils. I saw pictures of the children and it broke my heart. This really affected me because I was adopted from China and I could have still been there today. There is a special place in my heart for helping children who don’t have the opportunities we do. The pandemic presented an opportunity for me to think of ways I could help others. My dad immediately thought of the Sherpas in Nepal, who he had met while he was there. We reached out to one named Vishu Sijali, he and his daughter live in Pokhara, Nepal. We asked “how can we help?” He explained that there are many ways in which we can help, and through this project we will.

What inspired you to support Nepal?

Our family has very personal connections with Nepal. My dad traveled to Nepal in 2008 and 2011. Between the two trips, he spent about two months trekking rural areas of Nepal. He fell in love with Nepal. He has stayed in touch with people he met there ever since. A few of them have become good friends. Nepal is a very poor country. It’s estimated that 25% are living on no more than $.50 USD a day, making it one of the poorest countries in the world.

There are many theories on why it is so poor. One of the most reasonable is simply the cost of logistics. It is extremely hard to get around in Nepal. Roads and transportation are scarce. Rural communities tend to be far apart. There are many people who live high up in the mountains, where altitude and cold conditions make it even harder to visit. They may be in densely wooded areas where heat and humidity take their toll. Nepal has made significant strides in improving its education system in recent years, but illiteracy remains high. Schools in many regions remain grossly underfunded. They lack supplies, materials and in some cases basic necessities, like clean drinking water. We believe that Nepal’s future course will be defined by two major factors. They must increase investment in infrastructure and continuously improve their education system. We are all aware that China and India are emerging as major economic powers. Both of their economies will likely eclipse that of the USA in size in the next couple of decades. Nepal needs to grow too.

It will not grow at the pace of its giant neighbors. But, for it to remain independent and relevant we believe its economy needs to grow. Asia Times reporter, Navin Subedi, made this observation in a column in June 2019, “What will it take for poor and landlocked Nepal to benefit from the shift of global economic power into its neighborhood? In short, it must invest in connectivity to the outside world in general and India and China in particular. This includes maintaining and building new cross-border roads to connect with India and China. Nepal must find a way to benefit from the Indian investment in its internal waterways, a new option to reduce the time and costs of reaching the Bay of Bengal. Even a marginal reduction in logistics costs will support Nepal in its pursuit of industrialization and an increasing export base.”

We believe that improvements in the education system are also critical for Nepal to stay independent, free, and able to sustain communities.

How have you balanced this project alongside keeping up with your school work?

I have brought this project to the DECA Club. I’m hoping we can plan a fundraiser at the end of the school year. Since this project is quite new, I’m still in the process of spreading the word to the EF Academy community! But, my parents are helping spread the word via Facebook to the Napa, California community.

What’s the next goal for The Suit Project?

The current goal is to raise $2,266 to provide 103 “trek suits” (tracksuits) to the students of the Shree Bhanu Basic School in Urlabari, Nepal. The “trek suits” include pants, a shirt, warm jacket and a warm hat. For many students, this may be the only warm clothes they have.

The overall goal is to educate as many people as we can about the problems in Nepal. Hopefully they will be encouraged to help!

What’s the biggest thing you’ve learned from this project?

The most important lesson I’ve learned from this project so far is that every little thing makes a difference. It might only be 103 students to you, but to them it’s 103 individual lives. My advice for students who want to make a difference in the world is to start with a goal, and follow it. It’s easy to forget about things and then never be able to do them.

Visit The Suit Project to learn more about this project.