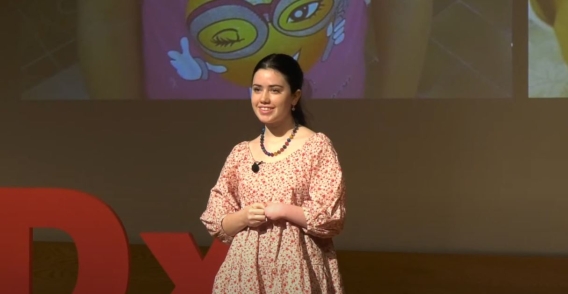 Next up in our TEDx EF Academy series is New York student and Ambassador Isabella:

For the first 3 years of elementary school I was the worst student in the entire school. I did not get good grades, and I really did not care about it. I was constantly punished, I was constantly in and out of the principal’s office. The teachers made me write down the things I had done wrong. I wrote down so many negative comments about my behavior that my remaining hand got covered in blisters. And soon enough I developed self-consciousness about my mental capabilities and a deep fear towards adults.

I thought people didn’t want Bella, people wanted someone else.

So I learned to lie, because I was now scared to get punished. It became a habit; even when it was not necessary. One day I told my classmates to be bilingual because I was not even Italian, the next day I said I was able to MAKE – all by myself –  the prettiest and most sophisticated clothes… and that my father was teaching me how to drive in the mall’s parking lot.  Of course no one believed me, but it was my way of escaping from reality.

I felt so bad about myself that I came into a cycle of self pity and easy detectable lies, but I didn’t really care about it, because that was my little way of taking revenge, I wanted to appear like the big fish, who knows how the real things are done; I wanted to appear smarter, older, enough, so that teachers didn’t dare to go against me nor consider me inferior anymore. For me they were in the wrong, they were punishing me, discriminating me from the rest of the community, just for a bunch of bad grades.

One year later, I moved to my mothers house as a consequence of my parent’s divorce. I finally got to 4rth grade, the year in which my English teacher asked me to take attendance, “Why me?” I thought everyone was ashamed of me, so I didn’t understand why such an important charge had gone to me. I became Isabella Zangirolami, official attendance taker of section B grade 4.

Well, that changed my life, because I felt like someone was believing in me. And from having the lowest average of my class I became the best in the whole school. From being an introverted and stuttering child I became the most outgoing child you could have ever laid your eyes on. I had the best notes, I was proactive in class, and I even managed to get scolded for arriving too early at school.

And here I am now, with many achievements that I would have probably never got if I did not have that teacher in 4rth grade. If I didn’t believe I was capable of taking responsibility, if I didn’t try, if I didn’t work for it. I bet we all have had to face rules once in our life…  a set of boundaries we got to know and play with since the earliest stages of our life…

But this leads us to another question… Who chooses these rules and why are they even there? Why and what is the purpose of getting punished for breaking a rule?

In 2008, Gherardo Colombo, a former Italian magistrate with over 33 years of experience published a “book, “on the rules”, and according to this book he says that rules are normatives, and as a consequence a hierarchy is naturally established, therefore it is inevitable to create groups which are in advantage and people who get discriminated against, before they are even born… Which consequently makes the system unfair, discriminatory, and hypocritical when giving punishments.

A good analogy with this are prisons. In Italy if you do a crime the lawbreaker gets to lose a big chunk of what we define as human rights. Cells in Italy are about 1.80m x 2.40m big, one sink and one toilet, plus extra 2 roommates. If you are lucky enough you get to have a window. In the best case scenario you get to have 1 hour outside you sell per day, and 10 minutes a week to chat with your family.  You lost your dignity, your privacy, and opportunities to find a job in the future. Now think about it. After this treatment do you think you are going to be grateful to your government or do you think you are going to condemn it? Do you feel you even have a choice?

To give you some visuals, with the traditional criminal justice system Italy got 68% as recidivism rate, this means that 7 people out of 10 go back to criminality after going to prison every five years. With the same system the United States gets up to 76.6%, almost 8 people every 10. In France 59% recidivism rate, Germany 40%.

Clearly not an efficient system.

Now the same dynamics follow in other relationships: parents and children, teachers and students, and in every other case in which punishment is present. Because punishment is based on revenge and not education, punishment in fact is the failure of education. Because with fear keeping things right is easy as long as there is control, but as soon as you don’t see it people go back to their old habits.

So what do we do to avoid this? You do exactly what my English teacher did, you give, you don’t take away. You give more responsibility, you care and help those who took something away from you, now this might sound like a cliché but treat others like you want to be treated.  Because it is thanks to this that people like me got the chance to change, got the chance to see hope, and get better.

Isabella is a student at EF Academy New York, a place she calls her new home. Originally from Italy, she is a proud global citizen. She loves hiking, painting, learning about the latest scientific discoveries, and chatting about philosophy paradoxes at th [...]