Why is the world obsessed with Korea? 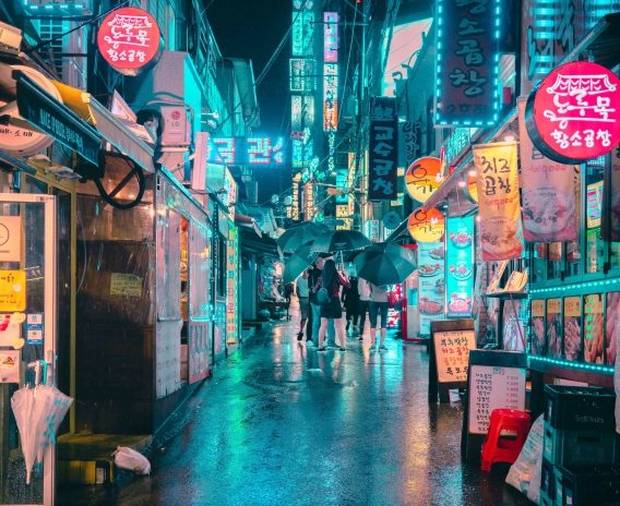 Since Gangnam Style took the world by storm in 2012, weird and wonderful news stories about South Korea pop up literally every week – whether it’s the revelation that Seoul Starbucks sells hot dogs, another crazy K-Pop video has dropped on Youtube, or someone discovered that the Korean slang term for an unmarried person is ‘Big Baby’.

We decided it was time to find out why the world is obsessed with Korea:

Heard of BTS? The ‘biggest boy band in the world’ according to global news outlets, they’re the first Korean artist to top the Billboard 200 and they have the most followers on Twitter for a Korean account.

The ‘Bangtan Boys’ epitomise the K-Pop genre with catchy hip-hop and bold dance-pop melodies, and they’re ultra-stylish. If you need an introduction to Korean music, check out their breakthrough second album ‘Wings’. Then search ‘K-Pop’ on YouTube and fall down the rabbit hole.

Still not sure what this whole K-pop thing is about? Check out our quick primer.

Take a stroll around Bukchon Hanok Village, marvel at the Gyeongbokgung Palace and then eat Kimchi to your heart’s content. Seoul is also one of the world’s leading SMART cities, so it’s incredibly innovative and modern. Read more on that here.

In recent years, contemporary fashion and beauty has kicked off in Korea. Like, big time. Taking a little inspiration from Western trends, K-Beauty and K-Fashion have quickly become a unique part of culture in SK.

Seoul Fashion Week sees stylish Koreans toting a variety of colors, patterns and silhouettes, with apparel ranging from casual streetwear to “kawaii” ensembles. ‘But what’s kawaii?’, I hear you ask. It’s a term they have for making everything cute: Think Hello Kitty or (some types of) manga. These fresh takes on modern trends are inspiring the outfits of people around the globe.

Meanwhile in South Korea’s beauty world, it’s all about having clear, glowy skin. The famous “10 step skincare routine” took the world by storm, and with so many fantastic Korean skincare products on the market, it’s no wonder K-Beauty has garnered so much international interest.

Speaking Korean is so on-trend. Firstly, it’s good to have this in the locker for the future, especially with the country’s booming and technologically advanced economy.

Secondly, although Korean is only the 17th most spoken language in the world, it’ll look extra impressive having it on your resume.

Oh, and that’s not to mention all the Korean TV dramas you’ll be able to watch if you master it. Take a peek on YouTube – they’re so… dramatic! (And awesome.)

Here are our top tips on how to learn this beautiful language fast.

Korea is a tech haven. It’s got a whopping 82.7% internet penetration, while 78.5% of people are smartphone users. It’s also got the world’s fastest internet and best 4G service, so you’ll never be left stranded with spotty 3G ever again.

Riding this tech wave is the pro-gaming scene. Enormous video game parlors are dotted all over the country, while sold-out stadiums host epic virtual battles between superstar gamers. Take a look at Starcraft or League of Legends, and you’ll get the idea.

Tags: Seoul, Korea
Learn Korean with EF!Learn more
Get the latest on travel, languages and culture in the GO newsletterSign up