Advice we love from graduation speeches 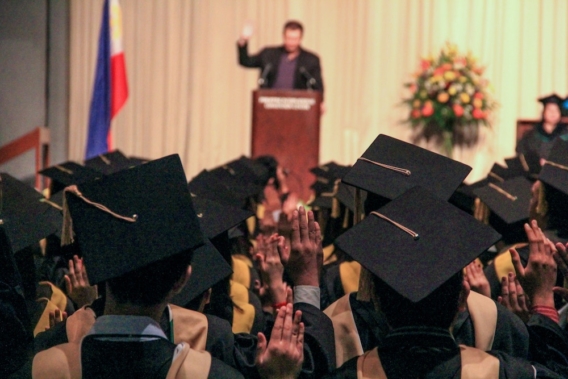 On graduation day, there’s so much to look forward to – getting dressed up, celebrating with all of your peers, receiving awards, and the most important part of all, holding your diploma in your hands for the first time. And with the experience, you get the added joy of a carefully-crafted commencement speech full of lovely wisdom from someone who learned an important lesson along the way.

So we thought we’d share some of our favorite pieces of advice from commencement speeches. Whether you’re watching this during graduation season or another time in the year, take this as an opportunity to kick back and be inspired.

Ellen is known today as a comedy icon, but in this commencement speech to Tulane’s first graduating class in New Orleans after Hurricane Katrina, she spoke about her harrowing road to get there. In her speech, she discussed feeling directionless as well as difficult loses in her life and how they guided her to find success in who she is.

“It was important for me to lose everything because I found out what the most important thing is – to be true to yourself. And ultimately that’s what’s gotten me to this place. I don’t live in fear, I’m free, I have no secrets, and I know I’ll always be okay because no matter what, I know who I am… Be true to yourself and everything will be fine.”

Conan is known for his hilarious and thought-provoking comedy sets. The longtime late-night host addressed Dartmouth’s graduating class with the same laugh-a-minute deadpan humor he’s famous for. But the talk took a turn as he discussed the very public difficulty in his career when, after 17 years on the air, he was forced off of the network that made him a household name.

“Whether you fear it or not, disappointment will come. The beauty is that through disappointment you can gain clarity, and with clarity comes conviction and true originality. Many of you here today are getting your diploma at this Ivy League school because you have committed yourself to a dream and worked hard to achieve it. And there is no greater cliché in a commencement address than ‘follow your dream.’ Well, I am here to tell you that whatever you think your dream is now, it will probably change. And that’s okay.”

Glenn Close is a beloved American actress, playing prominent characters in many beloved films and plays. She herself is a graduate of The College of William and Mary, where she was privileged this year to address the graduating class of 2019. Her speech takes listeners on her journey through her education, the days of her early career as a fledgling actress, and her evolution into a strong, empowered woman. She speaks of empathy as the cornerstone of the human species, and encourages graduates to nurture their relationships and connections; to look up from the screens once in a while and into the eyes of another human being.

“Your perspective is unique. It’s important and it counts. Try not to compare it to anyone else. Accept it. Believe in it. Nurture it. Stay fiercely, joyously connected to the friends you have made here, to those you love and trust. You will have each other’s backs for the rest of your lives.

Madeleine Albright is the former US Secretary of State and a former US Ambassador to the United Nations. She received her BA from Wellesley College and went on to become one of the most respected political figures of her time. During her tenure as Secretary of State, she faced many difficult decisions, some of which she references in her speech. Despite the challenge of her job (and being a woman in power in such a strongly male-dominated field), Albright continues to shower people all over the world with her wisdom, encouraging listeners to be crusaders of peace and goodness in a broken world.

“I do hope that when you accept your diplomas, you will be so determined to live life boldly, with largeness of spirit and generosity of heart. . . I hope you will each embrace the faith that every challenge surmounted by your energy; every problem solved by your wisdom; every soul awakened by your passion; and every barrier to justice brought down by your determination will ennoble your own lives, inspire others, and explode outward the boundaries of what is achievable on this earth.”

Some other favorite speeches