Back to basics: 10 English words for skiing 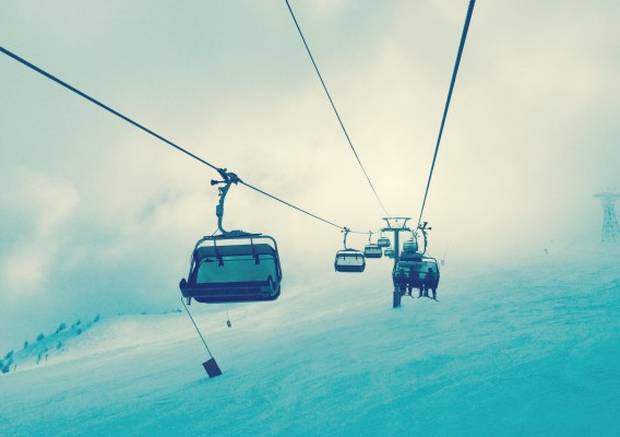 Like many of you, I am a keen skier, mainly because it’s the only thing that gets me through the horror of winter (you may be unsurprised to hear I also love beach holidays). When I first started skiing it took me a while to learn some of the technical jargon that I now use to fool people into thinking I’m a pro skier. But since I don’t want you to experience that same difficult journey, here are ten English words you should know before you get your skis on.

Let’s start with the basics: a binding is the plastic connection that holds your boots to your skis or snowboard. Make sure you get these checked every so often to ensure they’re as tight as they can be, because you don’t want your skis flying off. Hilarious yes, but it probably wouldn’t end well.

This word actually comes from French and means racetrack, but in a ski context it means the prepared slope down which you ski at a resort. Kind of like a road for skiers, but with more people falling down, and less tarmac (because tarmac would ruin your skis, of course).

When you’re not on the piste, you’re off of it – so this term means ‘the rest of the mountain that hasn’t had skiing routes prepared by the resort’. Let’s be real: people who go off-piste are usually super cool but also slightly insane and reckless, and very occasionally they die in an avalanche or by falling into an icy chasm. In conclusion: probably don’t go off-piste. Safety first.

Speaking of danger, this formidable word stands for something suitably terrifying: a landslide of snow that’s as destructive as you can imagine. Formed when layers of snow slide off each other, avalanches rarely happen in ski resorts because the staff have made it safe. Sigh of relief.

Another name for a piste, a run is always preceded by a colour and denotes the difficulty of a slope. Blue is the easiest, followed by red, and finally black as the most challenging. If you’re a new skier, I wouldn’t advise tackling a red or black run until you’re ready, as the results will likely be hilarious but could leave you both injured and embarrassed (whichever is worse).

Also called a draglift, this is an old-style way of getting from the bottom of a piste back to the top. Two people sit either side of a bar shaped like a upside-down T, which pulls them up a small trail. Most skiers hate them and if you haven’t fallen off one at least twice, you’re not skiing often enough.

This beginner’s move for slowing down is so called because you turn the front of the skis in towards each other to form a V shape, which kind of looks like a snowplough (fun fact: you spell it snowplow in the US) like on the front of a train or truck. The decision to make train noises as you ski is up to you.

Once you’re past the snowplough stage, you should be advanced enough to start making clean turns using the edges of your skis. This is called carving, which personally always makes me think of carving a Christmas turkey and then leaves me extremely hungry.

Now here’s a cool word: although mogul actually means something totally different in English, the skiing term is derived from the Bavarian word mugel, meaning ‘small mound or hill’. It’s a pretty apt description of what it signifies, which are bumps on the piste formed by skiers making sharp turns as they carve down the slope. They’re actually really annoying though.

What better way to end the day than recovering from a hard ski session with friends in a hut at the bottom of the piste! This is what we call après-ski (“after skiing” in French) and it usually involves drinking various beverages *ahem* of your choice. Whether it’s a simple hot chocolate or something a little harder, just make sure you’re in a fit state to ski the rest of the way down to the exit when you’re done. Happy skiing!

Tags: Language learning, Travel tips, Sports
Hit the slopes and learn English with us in CanadaLearn more
Get the latest on travel, languages and culture in the GO newsletterSign up