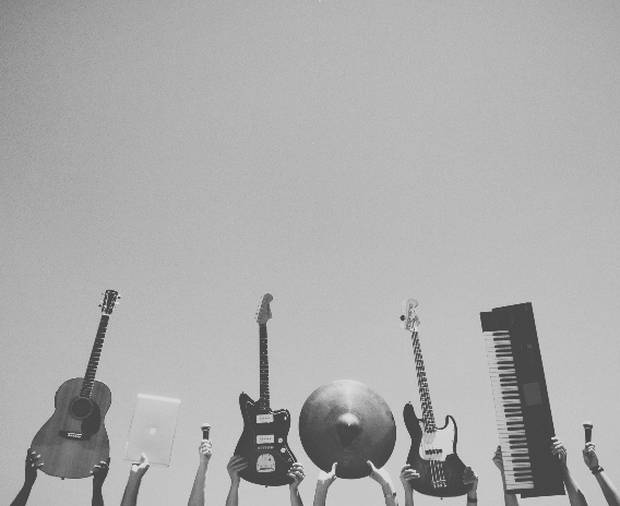 You’ve just aced the last exam of the year, the gym hall doors burst open spontaneously and glorious sunshine covers you like something from a biblical passage. You pull out your imaginary electric guitar, majestically whip your hair round and do a power slide through the school flowerbeds.

Remember doing this? No? Only me then.

If you’re currently stuck on the couch, yearning for a solid dose of British culture, then you’re in luck. Here’s a deep dive into all things rock ‘n’ roll in Britain.

There’s an ongoing debate about the current state of music in Britain, which has created a bit of a national panic; people seem to think rock and roll is ‘dead’. So let’s put our brain chords together and take a look at the rock genre, starting with a bit of historical context.

Rock ’n’ roll has its roots in the African American experience of the 1940s and ‘50s – in gospel, blues, jazz, boogie, swing, and even country music. The primary instruments were piano and saxophone, before the guitar became the iconic symbol of the genre with the arrival of the legendary Chuck Berry.

Chuck was quickly followed by revolutionaries such as Elvis and Hendrix, who went on to redefine both music and culture in America. Their music was reactionary – explosive! In a society ruled by the conservative white elite, people believed this new form of blues-based rock, which layered powerful backbeat drums over wandering guitar riffs, was the work of ‘the Devil’. It made people move differently; throwing their feet and hips around, sweating and shouting like ‘something possessed’.

Across the pond, the music landscape in Britain changed radically. From the ‘60s onwards, we were graced with the Beatles and the Rolling Stones, then Led Zeppelin, Pink Floyd, The Who, Queen, The Smiths, and eventually Oasis in the ‘90s. Manchester and London were bouncing.

The music had a gritty emotional resonance that elevated people from humdrum life, glorifying the struggle against unemployment and rising inequality with reactionary lyrics and illuminating rhythms.

In an interview with TIME a few years ago, Noel Gallagher claimed that Oasis was the last true rock ’n’ roll band. They were ‘pre-YouTube’, he said. He meant that the actual experience is now lost, because everything is available at the touch of a screen. No need to make the effort to be somewhere anymore.

Well, the leading genre in Britain today is processed pop. Maybe that’s because there’s less need for profound lyrics and original musicians – people just want to hear catchy songs. One view is that music plays a supportive role to teenagers now, rather than a liberating one. Everyone has access to everything on their phones, so there’s less need to make the effort.

Some might say technology has made us passive. And music now is less about the art and more about the money-making. Take a look at how many recent pop songs have been written behind the scenes, not by the artists themselves, but by talented writer/ producers like Max Martin, Ester Dean, and Stargate Production.

It all depends on if you’re an optimist or a pessimist. I’m strictly the former – there is certainly hope! London, Oxford, Manchester and Brighton are thriving with alternative, indie and classic rock music, proving that the genre is still a pillar of British culture. It might not be traditional rock and roll, but there’s variations of the rock genre that still have a beating heart and soul. Think The Courteeners and The Blossoms from Manchester; The Foals from Oxford; Wolf Alice, VANT, The Hunna, and The Amazons from London or nearby.

Get their music in your ears and then tell me there’s no original musicians and no thoughtful lyrics. Rock isn’t dead you might just have to look a little harder.

Tags: UK, Culture, British, English, Music
Experience British culture first handExplore
Get the latest on travel, languages and culture in the GO newsletterSign me up