Every year, thousands of EF Hosts open their homes to students from around the world. Meet Russell and Shemane from San Diego who hosted two 14-year-old EF students, Paul and Jonas. They shared a piece of their experience with us.

This morning I was awakened at 3:30 a.m. when I heard a message come to my cell phone, as I picked it up I realized that we had just received a message from Paul. Soon there was another chime and I saw that Jonas had responded to Paul’s message on our WhatsApp EF family chat. I jumped into the fray, joining the conversation we’ve so often communicated in since the first day they came into our home. Our EF experience was – and still is – priceless. 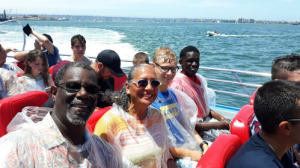 Paul is from Ivory Coast, Africa and Jonas is from Germany. In the summer of 2019 my wife, Shemane and I hosted these two 14-year old EF students when they came to San Diego, California. Shortly after they arrived, we welcomed them into our home, and they instantly became a part of our family.

For the next three weeks we interacted with Paul and Jonas mornings and evenings. We showed them what life in San Diego was like and they taught us about their cultures. We shared some cool experiences, introduced them to new foods, shared our local culture, and we showed them some love from an American perspective.

Every morning we would get them up and out to the school bus and in the late afternoon we would pick them up. Then it was our time to hang out with them.

We opened our home and hearts, gave two foreign EF students a chance, and in the process, we gained two sons.

If you are considering giving EF a try, we would highly recommend this program. It is a great way to make connections with young people from other countries and cultures from around the world while staying in the privacy of your own home.

Tags: Language learning, Student life, Host family
Curious about hosting with EF?Learn more
Get the latest on travel, languages and culture in the GO newsletterSign me up

How to say I love you in 10 languages
By Martinique · 2 min read
How to learn English quickly: 10 tips
By Erin · 5 min read
New year, new language – 8 tips to make it happen
By Isabelle · 5 min read
The 10 most popular GO articles you should have read in 2022
By Sonja · 3 min read
See more from