9 books that will inspire you to travel the world 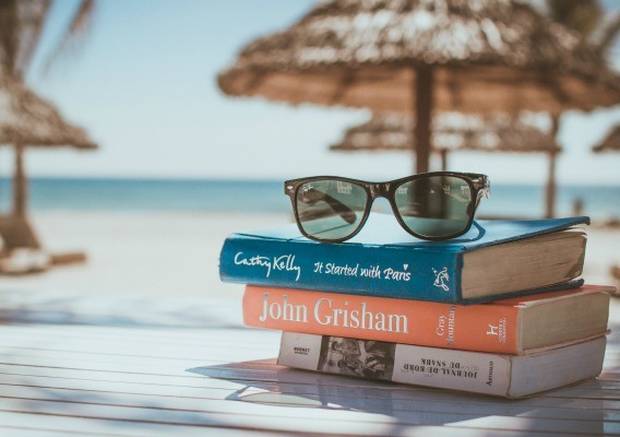 “That’s the thing about books. They let you travel without moving your feet.” – Jhumpa Lahiri

Reading is the door, the key, and the welcome mat to a whole new universe. You can open a book and transport yourself anywhere in and out of this world, powered only by your imagination and guided by the well-chosen words of an author. You can read whenever, wherever, and in whatever language you like. (Speaking of reading in another language is a great way to improve and keep up your language skills, by the way.)

But I have to admit that I don’t read as much as a person who wears black-rimmed glasses and writes for a living probably should. I have several excuses (don’t we all?), but one that I definitely cannot use any longer is that I don’t know what to read – especially when it comes to travel books: Check out our bloggers’ favorite picks that will inspire you to hike, climb, swim, drive, bike, and fly around the world in order to find both beautiful destinations and yourself.

This autobiography about finding yourself on a world trip is based on the life of American author Elizabeth Gilbert. After a long and nasty divorce and a love affair that didn’t end well, she decides to go on a trip around the world and chooses three countries to visit: First, to Italy to eat and enjoy herself, then, to India in the hope of finding her spirituality, and, last but not least, to Indonesia on a quest for balance. During her journey, Gilbert  – with the help of new friends and exciting adventures – slowly begins to discover what she wants in life. In the end… well, you just have to read for yourself. (If you don’t feel like reading, you could also cheat and watch the movie, starring Julia Roberts as Elizabeth.)

Tom: Londoners: The Days and Nights of London Now – as Told by Those Who Love it, Hate it, Live it, Left it and Long for it (by Craig Taylor)

Weirdly, I started reading this book after I moved away from London, but it reminded me of all the reasons why I love (and love to hate) it. The book’s author, Craig Taylor, is a Canadian writer and long-term London dweller who spent years traveling around the UK capital, interviewing people from all walks of life, professions, and personalities – from airline pilots landing at Heathrow airport to the woman announcing the stations on the Tube. The result is a portrait of London created from many different perspectives that shows how people in the 00’s make this world-class city their home, whatever their personal circumstances.

Tom: By Any Means (by Charley Boorman)

This book originally started life as a follow-up TV show to Long Way Round, a documentary starring actor Ewan McGregor and his best friend, Charley Boorman. Together with a producer and a cameraman, Charley went on his own trip around the world during which they made it from Ireland to Australia using everything except airlines. The fact that you follow the trio through every consecutive country and culture makes it a fascinating geography lesson, as well as a social commentary. If you can, make sure you watch the TV show (of the same name) as well.

Emma: Neither Here nor There (by Bill Bryson)

In each chapter of this book, Bill Bryson’s anecdotal travel tales introduce you to a different country in Europe. Studiously documenting his hiccup-filled voyages across the continent, his enthusiasm and frank honesty makes it easy to believe that you are searching for the northern lights in Norway or braving the crazy Parisian traffic at his side. Bryson’s observant storytelling combines sarcastically commenting on everything, openly judging other travelers for their moronic moments, and honestly admitting to plenty of his own faux-pas – you’ll struggle to finish a single page without laughing out loud.

Follow the epic exploits of Oxford University graduate, Mark Mann, as he sets off on a hilarious journey of self-discovery through South America with his two companions – his hippie girlfriend and high-octane, party-loving best mate. Marveling at the dynamic trio’s outrageous stories, you’ll fall for the quirky characters and itch to visit Peru or Bolivia for yourself. Oddly (but excellently), tales of adventure, reckless behavior, and drug-addled escapades are sandwiched in with informative passages that explain each region’s history, geography, and ancient cultures: You’ll come away from this book with actual knowledge, not just an aching belly from laughter.

Erin: A Walk in the Woods (by Bill Bryson)

Follow Bill Bryson and his hapless friend, Stephen Katz, as they undertake a challenge that soon proves to be far more arduous and troublesome than they had imagined. The feat? Hiking the Appalachian Trail in the eastern United States. This 3,500 km mammoth stretches from Georgia to Maine and proved a test for the two men in just about every way that the great outdoors can be: From equipment and fitness issues to the fear of bears, Bryson and Katz continue gallantly on, and their experience makes for a real giggle. Scratch that – a real belly laugh.

Erin: Viva South America!: A Journey Through a Surging Continent (by Oliver Balch)

Journalist Oliver Balch explores the homes, prisons, streets, and minds of South America in this sometimes amusing, often tragic, and always thoughtful read. Choosing a theme for each country, the author uses these topics as lenses through which he attempts to understand not only each nation’s political and social struggles  but also any progress made after Simon Bolivar (the continent’s “great liberator” and Balch’s symbolic guide) first dreamt of freedom from Spanish rule. The result is a poignant look at modern-day South America, which, while not always uplifting, is an absorbing and essential read for anyone curious about this vibrant, changing continent.

Follow journalist-mountaineer, Jon Krakauer, on his trek to conquer Mount Everest with the Adventure Consultants‘ 1996 Everest expedition. Learn about the lengthy acclimatization process to adapt to high altitudes, the perils of crossing the Khumbu Ice Falls, and the reverence mountaineers and Sherpas feel toward Chomolungma. Fear for Krakauer’s life as he descends the mountain, tailed by a murderous storm that ends up claiming the lives of his climbing companions. This tragic but gripping personal account of the ascent of the highest summit of the world will leave you in awe and gasping for oxygen.

Caught in a hailstorm during a swim training, Lynne Cox discovers her passion for swimming in extreme conditions at the age of nine. She goes on to become a record-breaking (English) Channel swimmer at 15. Follow her as she travels the world, from the USA to New Zealand, and brings down barriers between cultures and nations through her long-distance open water swims. Cox’s inspiring and refreshing tale will open your eyes to the beauty and strength of both the sea and human willpower.

Tags: Travel tips, Inspiration
Travel the world with usLearn more
Get the latest on travel, languages and culture in the GO newsletterSign up