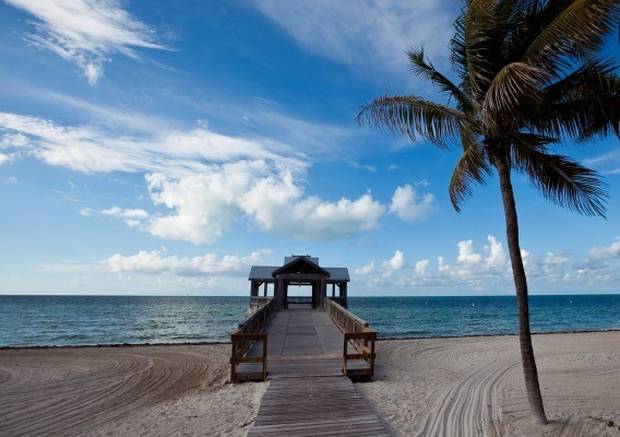 When you hear Florida, you probably think of palm trees, miles of white sand beaches, and, Miami, the hotspot that attracts party lovers as much as sun worshippers. But the Sunshine State has so much more to offer than Miami. Sunshine, for example. And 13,600 kilometers of coastline, combined with the fact that, no matter where you are in Florida, you’re never more than 90 kilometers away from a beach. If these three reasons haven’t yet convinced you to visit the flattest state in the U.S. (Florida is only 30 meters above sea level), then here are eight more that will do the trick:

Our tour begins in the northeast of Florida: St. Augustine, America’s oldest permanently occupied European settlement, was founded in the 16th century by the Spanish explorer and conquistador Juan Ponce de León. The city is famous for its colonial-style architecture and the Spain-inspired atmosphere: From the impressive Spanish fort Castillo de San Marco to the Ponce de Leon Hotel that’s now part of Flagler College, and Villa Zorayda, a city palace inspired by the Spanish Alhambra in Granada – St. Augustine’s unique old-world charm is ever present in the colonial quarter.

About 100 kilometers south of St. Augustine is Daytona Beach, a city filled with (spring break) parties and, of course, all things motorsport. The love for cars is not only visible at the _Daytona International Speedwa_y, home of the annual Daytona 500 NASCAR race, but also on the beach: The hard-packed sand makes it possible for cars to basically drive into the ocean. If you can, rent a car, fill it with friends and everything else you need for a beach BBQ, and drive to the Original American Beach for a day full of waves and fun. While you’re at it, do some people-watching on the boardwalk and check out the many restaurants and shops before hopping on the rides and the Ferris wheel that make it seem like you’re at an amusement park right by the beach.

Let’s leave the little theme park by the beach behind and check out its big brothers in Orlando – about 100 kilometers southwest. Welcome to Walt Disney World and its four Disney theme parks Magic Kingdom, Animal Kingdom, Epcot, and Disney’s Hollywood Studios. Oh, and let’s not forget the two water parks that are also part of the (endless) fun. Save some energy because there’s more to come, especially if you’re a Harry Potter fan: Dive into the wizardry world of Harry, Hermoine, and Ron at the sunny Universal Studios in Orlando – it’s basically like getting a backstage pass to everyone’s favorite wizard movie.

East of Orlando, along the Atlantic Coast, is Cape Canaveral and the Cape Canaveral Air Force Station (CCAFS), as well as NASA’s John F. Kennedy Space Center (KSC). Here, Apollo 8 – the second human spaceflight mission in the U.S. and the first manned spacecraft to orbit the Moon-  was launched in 1968. Learn all about the history of space travel at the visitor center and brace yourself for a truly out-of-this-world experience: Have you always wanted to meet an astronaut or witness the launch of a spaceship? Well, then high five yourself and experience the complete launch of a spaceship at the Rocket Launch Simulator! If you prefer a more down-to-Earth experience, soak up the sun or catch the waves at Cocoa Beach. (For some reason, this has nothing to do with chocolate.)

Fort Lauderdale, about 40 car minutes north of Miami Beach, is known for boats and bling: The city isn’t just home to one of the world’s biggest cruise ports, it’s also the Yachting Capital of the World and (therefore) a popular vacation destination for the rich and famous. But don’t worry if you don’t own a yacht – gondolas and water taxis are a fun way to cruise around Fort Lauderdale’s many canals and waterways. A special sightseeing treat of the Venice of America is a boat tour on Millionaire’s Row: Get blown away by luxurious yachts that are parked in front of even more luxurious mansions.

No trip to Florida is complete without a visit to the Everglades, a national park that was founded in 1934. The Everglades, the largest subtropical wilderness in the United States, also include one of the largest contiguous stand of protected mangrove forest in the western hemisphere. The Everglades National Park is home to over 30 endangered species, such as the manatee, the Florida panther, and the American crocodile. The best way to see the truly spectacular nature and wildlife is to walk, bike, kayak or canoe: There are guided tours by land and by sea, and it’s recommended to explore the area with an experienced park ranger – they know where to look, and give you the inside scoop on all the birds, mammals, and reptiles. Oh, and little fun fact to impress your friends with: The Everglades are the only place in the world where you can find alligators and crocodiles at the same time. #themoreyouknow

The over 200 islands of the Florida Keys, which start all the way in the south of Florida and reach – beautiful 300 kilometers later – the Gulf of Mexico, look like a string of pearls. Absolutely breathtaking pearls, that is. Various bridges connect the islands, and the most famous one is the Seven Mile Bridge – yes, you guessed right, the bridge is seven miles, or 11 kilometers, long. At the end of Highway 1, there’s Key West, the southeasternmost island of the Florida Keys – from there, it’s only 90 miles until you reach Cuba! If you want to do something cultural, visit the Ernest Hemingway Home & Museum, the house of Nobel prize winner and literary genius Ernest Hemingway and a whole lot of cats. (About 40-50 of them have six toes and are descendants of Hemingway’s famous polydactyl cat, Snow White.) Of course, there are not only cats in Key West – visit countless butterflies at the Key West Butterfly and Nature Conservatory before you refresh and recharge at the many restaurants, bars, and shops along Duval Street (seafood, anyone?). The welcoming atmosphere and friendliness of the Conchs, the residents of Key West, can be experienced everywhere and gives the area a lot of its charm. (Since we’re all about learning here, the Conchs got their nickname from a large-sized sea snail or their shell.)

A lot of Florida visitors only explore the Atlantic side of the state – but let us show you the many reasons why the Gulf Coast is definitely worth a visit – or four.

Naples: Naples, one of the wealthiest cities in the U.S., is full of billionaires and their impressive mansions.(Bill Gates has a house here.) In case you’re not into high-end shopping or golf, we can highly recommend Naples’s beaches – they will still make you feel like you hit the jackpot. Wiggle your toes in fine white sand, swim in clear water, and enjoy some of the most beautiful sunsets your Instagram feed has ever seen. #nofilter

Sanibel Island: One hour north of Naples, toward Fort Myers, is a Caribbean paradise that basically looks like a postcard. Sanibel Island’s beaches also boast huge amounts of seashells, and shelling is a popular pastime for visitors (and locals alike). If you’re able to find a Junonia – characterized by its brown dots – you might get fortune and fame. Or at least a picture in the local newspaper, as the shell only rarely washes up on beaches.

Tampa: Tampa is the third biggest city in Florida, and it’s popular with students: The University of South Florida seems to offer the ideal climate to get your learning on. If you prefer studying animals – and not students – in their natural habitat, check out Busch Gardens, an African-inspired animal theme park that also includes all kinds of restaurants, rides, and roller coasters. (No wonder it’s one of the most-visited theme parks in both the United States and the world.)

Pensacola: After driving a quick 770 kilometers, you’ll reach Pensacola, Florida’s westernmost city. P-Cola, as the locals call it, is heavily influenced by America’s south and the kind-of-bordering states Louisiana, Mississippi, and Alabama. This part of the Gulf Coast is also called Emerald Coast because of its – surprise! – stunningly emerald-green water. Since you can’t just enjoy the water all day long but have to eat at some point, we recommend red snapper, a local delicacy. Enjoy!

Tags: Travel tips, US, Florida
Ready for your own Florida adventure?Learn More
Get the latest on travel, languages and culture in the GO newsletterSign me up