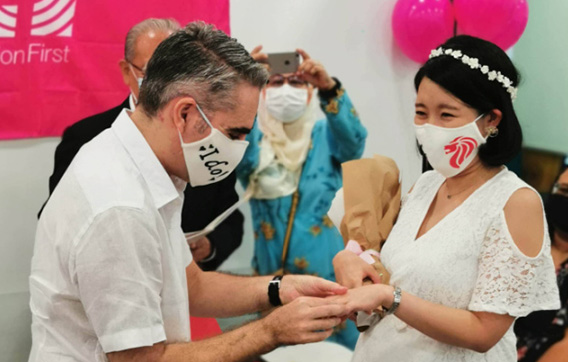 In January 2019, Sachika arrived at EF Singapore, one of our EF International Language Campuses, to study English. Having worked in a psychiatric hospital in Japan and as a caregiver in the U.K., Sachi wanted to pivot her career and knew improving her English was a necessary next step. While she could have chosen any of EF Education First’s language campuses in over 50 destinations across the world, she picked EF Singapore so she could be close to family in Japan. Sachi was prepared for something new but had no idea how much her life was about to change.

She soon met Thierry, who arrived from France three weeks after her. Working in steel trading, he was also looking to change his career by learning English.

Since they both had work experience, they were placed together in an academic program for professionals. They quickly realized they had a lot in common. 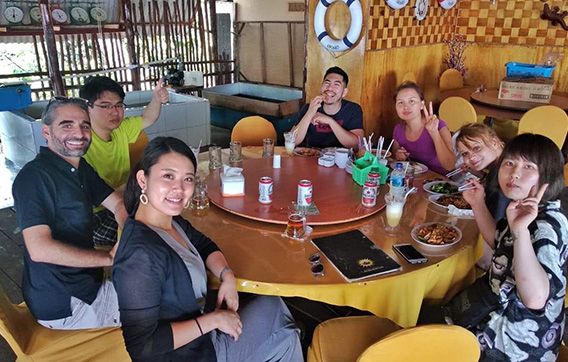 Sachi and Thierry having dinner in 2019 with fellow EF students. “Thierry was very entertaining in class. Everyone liked him. He was this handsome older western guy,” Sachi says, laughing.

She initially didn’t think anything would happen between them, but they connected through activities organized by the school. And continued their conversations over dinner and drinks most evenings. The two never ran out of things to talk about, thanks to discussion topics they learned in class.

“We learned a lot about each other because, in class, you have to give your opinion on different world topics according to your values and life experiences,” says Sachi. “Through the answers we shared, we came to understand each other very well.”

Outside the classroom, they continued discussing everything from their personal lives to what they wanted in the future. Sachi and Thierry quickly realized their Japanese and Mediterranean cultures were more similar than they originally thought. The two shared an understanding of respect, education values, and the importance of family. Thierry jokes that EF should start a dating service and use their discussion questions as prompts for dates.

Although the pair didn’t cross paths until they met in Singapore, they shared a global mindset that influenced how they navigate the world. Sachi had traveled to and lived in Canada, India, Hong Kong, and Australia before the U.K., and Thierry worked in Ivory Coast, Senegal, Cameroon, and Gabon before returning to France.

“We wanted to experience new cultures, new countries, and new people,” Thierry says. “This desire to discover the world and meet new people and learn about their languages and customs is a motivation we have in common.” 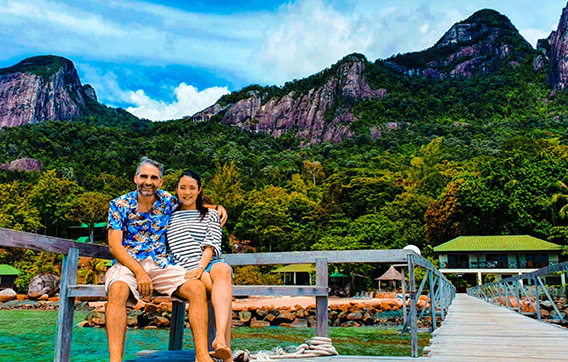 Sachi and Thierry enjoying a weekend trip to Malaysia.

Through all their shared interests, the two became inseparable, and their friendship evolved into a relationship. They continued to learn more about each other, challenge one another in class, and make memories exploring Singapore together. Finding a partner while studying abroad was not what either of them expected, but they relished in the time together.

As August 2019 neared, so did the end of Sachi’s time studying at EF. The couple reached a fork in the road.

How should they continue their relationship? Uproot their lives in France and Japan to live permanently in Singapore, or move back to their home countries? They grew to love Singapore and found the city very safe, clean, and friendly. With little hesitation, they decided to stay and move in together.

“When you think internationally, when you think globally, you are less worried that you are only thinking only about the same country, the same city, the same village. More and more, you become open-minded, and you find it easier to navigate different and challenging times,” Thierry explains.

Sachi quickly found a job at a Japanese company in Singapore while Thierry finished his EF course. And near the end of the year, they found out that their family was growing by one. They wanted two things before their baby came.

First was a trip to Japan to visit Sachi’s family. “My family was like ‘You two are crazy!’,” she laughs. Despite never visiting before and not knowing the language, Thierry immediately fell in love with Japan.

“During dinner, when you don’t speak the same language, it’s totally different. In your own country, when you meet your own family, you can make jokes, but then when you don’t have any words, you can’t do that,” Thierry jokes as he recalls the dinners with Sachi’s family.

He did say one thing made the communication barrier easier.

“Food helps a lot. The food is amazing in Japan, especially when sharing a meal. A good meal and good wine help break the ice and makes us feel comfortable and share good moments.”

The second item on the pre-baby agenda was getting married. However, planning a wedding in the middle of Singapore’s COVID-19 lockdown proved a challenging task. They shared their thought process on choosing a venue:

“The symbol of a wedding in the EF school, the place where we met, was a wonderful idea, so we contacted the staff and teachers and invited them to serve as witnesses,” shared Sachi.

“We felt so much appreciation for the staff attending our wedding,” said Thierry. “I know it was a hard time for many in the world, so I am especially grateful for them joining us.”

The wedding was limited to 20 people because of social distancing restrictions, and all 20 guests in attendance were EF staff and teachers. A couple of weeks later, baby Kenzo was born on the National Day of Singapore. 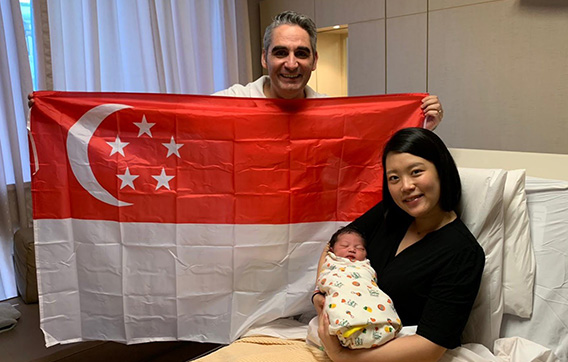 Filled with pride, Sachi and Thierry welcomed baby Kenzo into the world on the National Day of Singapore.

Now, a few months into parenthood, Sachi and Thierry spend a lot of time as a family inside, taking it day by day, watching Netflix. They can share their favorite shows and movies from back home and even practice English with U.S. shows (they proudly shared that they have watched all eight seasons of “Friends” and love the Studio Ghibli movies).

They are raising Kenzo on both Japanese and French baby songs, and they speak in both languages to him, teaching each other at the same time so that every day they learn a little more as a family.

“Love doesn’t have a language. We have our own language. We understand each other so well,” Thierry explains. “We know a bit of Japanese and a bit of French, and English is the common language, but it’s a mix of all; we have created our own.”

So what does the future hold?

Thierry answers, “with our English skills, we have possibilities to go anywhere now. It’s challenging, but it’s exciting. We have a new baby, and the future is not clear, but nothing is impossible. We feel we can take our little monster and go everywhere.”

If you asked a friend to describe Lydia they’d say: Lydia is a tiny but mighty rugby player, a vegetarian chef with recipes that would make even carnivores question their diet, and an ocean lover currently in a long-term relationship with sunshine. [...]