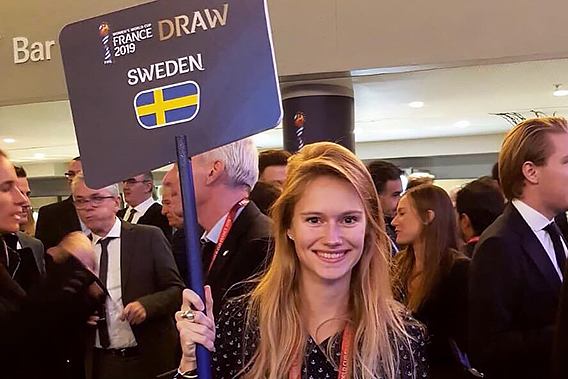 When Isabell found out her flight to Stockholm was cancelled, and the flight the airline had rebooked her on would cause her to miss her connection to Rennes (where she was scheduled to meet up with the Swedish National Women’s Football Team), she wasn’t worried. As a Corporate Travel Coordinator for EF Educational Tours out of EF’s Zürich office, Isabell is confronted with similar travel disruptions on a daily basis.

“I don’t feel any stress because it’s my job to deal with this exact sort of thing,” she says. “Preparing for different scenarios, handling these inconveniences when it comes to travel…you can always find a solution. I’m not worried about it. I’ll get there.”

But the “there” Isabell is talking about here is more than your average business trip or summer holiday. In fact, the flight she’s referring to is the first leg of a five-plus-week excursion around France, where she’s working as the Swedish National Football Team’s Liaison Officer for the 2019 FIFA Women’s World Cup. With a list of duties that include everything from verifying schedules and managing requests to translating and interpreting for the players, Isabell’s embarking on an impressive opportunity. She’ll oversee all communication between the Swedish National Women’s Football Team and the services put in place by the Local Organizing Committee (LOC) as well as FIFA.

“I’m the team’s right-hand woman,” she explains. “I’ll be with them all the time: managing logistics, scheduling training times and communicating with delegations from FIFA and the other teams. Of course, the language aspect is very important—I’ll be translating and talking with everyone from bus drivers to hotel receptionists—but on a higher level, I’m simply the link between the team and the governing organization, so that the players can focus solely on giving their all on the pitch.”

It’s an opportunity that makes perfect sense given Isabell’s current role at EF.

“I’m already in this world a little bit,” she notes. But it’s also surprising when you discover that Isabell didn’t start speaking French until she was in her early twenties and has actually received very little formal education in the language.

“I kind of just ended up in France,” she laughs, recalling how she moved there to be with an ex-boyfriend when she was 21. “I didn’t know any French when I moved. Nothing. I took an online course and enrolled briefly in a French class in Paris, but mostly just learned by living the language.”

Studying economics back in Sweden with a French orientation, and then later spending a semester abroad in Lyon as well as summers interning in Paris, has since done much for Isabell’s French fluency. It was then that she also learned about the Team Liaison Officer role—at the time in regards to the 2016 Men’s European Football Championship in France. While that experience never came to fruition, the recruiter kept her contact information and reached out to her a year ago to ask if she’d be interested in a similar opportunity for the upcoming FIFA Women’s World Cup. A few interviews and trainings later, Isabell was off to Stockholm to meet the Swedish National Team and watch them play for the first of what would be many games.

Isabell will be traveling to three different cities around France in June and July 2019—perhaps more depending on the Swedish National Team’s success.

“I am just super excited to be involved,” she says when asked what she’s looking forward to most. “I love the sport. I love getting to live this experience alongside the players. I love that they treat me as a part of their team and have welcomed me into their little family.”

As far as actually getting to Paris, her flight path is still a little up in the air.

“I was supposed to meet the team in Stockholm and catch a chartered plane from there to get to France, but now that’s not looking like it’s going to happen,” Isabell says with a shrug. “I’ve been in contact with the airline and am trying to get an earlier flight but that flight is completely sold out so now I think my next best option will be to buy a new ticket and get my original airline to cover the costs of the new flight, which they sometimes do—you always have to try!”

However she gets from Sweden to France, one thing is clear: Isabell’s positive outlook and stellar problem-solving skills, which she attributes to her time working for staff travel at EF, will serve her well in her role as Team Liaison Officer.

“EF has impacted my life in so many positive ways,” she says. “Not only have they allowed me to pursue this opportunity, but they’ve also provided me with the skills and knowledge to achieve the opportunity in the first place. I am very grateful.”