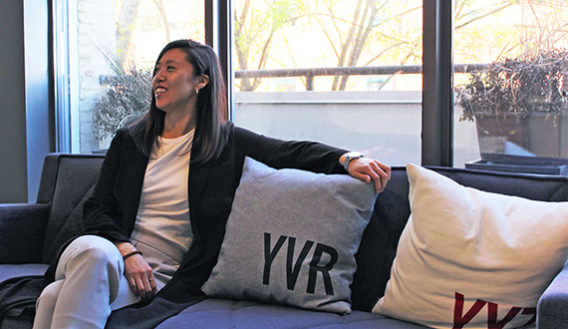 Ask Diana about her professional successes and she’ll tell you luck has always been on her side. Listen to her story, however, and it becomes clear that her determination and passion has opened doors to opportunity.

Diana grew up in Aurora, a small suburban town just north of Toronto, Ontario. Her parents, born and raised in South Korea, moved the family there for a slower pace and better education. At the time, Diana’s family was one of the only immigrant families in the area.

“What I remember from high school was struggling with my identity,” she explains. “At home, we had very traditional Korean values. I would go to school and try to assimilate to what I considered [to be] Canadian culture.”

After high school, Diana attended York University to study law. “This was mandated by my very academically driven parents. We were told: doctor, lawyer, or engineer,” Diana jokes. She even took the LSAT’s. But after college, Diana traded law books for airline tickets and flew to South Korea for a gap year. It was a decision that would change the course of her career and ultimately lead her to EF Education First.

“It was probably the first time I really figured out who I was. I was away from my family, forced to be incredibly independent and make a new community of friends,” Diana recalls. “This probably isn’t a very original thing to say, but I think everyone who works at EF has been changed by travel in some fashion. If I had not had my experience in Korea, I would not be who I am today. It was life-changing.”

While teaching English at a school in Seoul, Diana realized how much she loved sharing knowledge, but she found the teaching methods prescriptive. The techniques were based on memorization. “It doesn’t teach kids how to speak proficiently,” Diana explains. Given the OK by her school, she developed a new approach.

“I decided to marry my passion for dance and teaching through an after-school breakdancing workshop,” she says proudly. “I ran the classes in English. The kids couldn’t understand 80 percent of what I was saying, but through dancing and visualization, it became a fun way to learn a new language — and it was quite successful.”

Diana returned home filled with joy from her time abroad. Facing unemployment, she was only certain of two things: “One, I knew being a lawyer wasn’t for me. Two, I definitely knew I wanted to work in education in some capacity.”

Through a friend, Diana heard about EF, and she eventually found herself as a Sales Manager in Toronto. The role was focused on consultative-based sales training, creating a vision to help onboard, develop, and accelerate staff in Canada—a process the team there hadn’t yet created.

“That role helped me realize what I wanted to be and who I am,” she says happily. “You get all these incredibly eager, super talented young people and you’re responsible for not only their integration to EF culture, but also for the start of their career.”

Diana developed the first sales on-boarding program in EF’s Toronto office. “We’ve had some of the best Tour Consultants come out of that program. I’m very proud—that’s my biggest EF accomplishment to date.”

Recently, Diana transferred to the Vancouver office. In addition to breathtaking scenery, Diana has a small, tight-knit team who challenges her “not to lead with process and performance, but with people,” she says. While challenging, she loves the support she gets to provide for her team.

“It’s much more high-impact. I feel very entrenched in their development.” They learn from her and she learns from them. “I get to work with people who are so much smarter than me,” she says. “My colleagues have strengths that are very different from mine. I’m becoming a more well-rounded individual just by being surrounded by them.”

Diana’s longstanding passion for travel and education has evolved into a passion for growing staff. “I always go home happy when I feel like I’ve made someone better at their craft and inspired them to hit beyond their expected potential,” she says. “Every day is a new day, a new challenge or problem that we’re trying to solve. It’s why I’m excited to come into work every morning. And it’s just fun!”

Julia is a Boston-area freelance writer with passions for travel and style. When she’s not documenting the fascinating stories of EF staffers, she can be found in her kitchen kneading pasta dough, at a local wine bar with girlfriends, or exploring the qua [...]