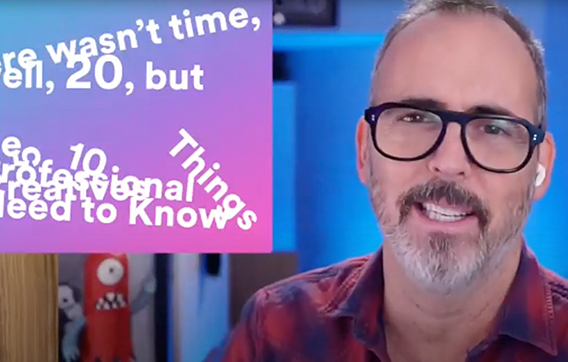 Joel Hladecek knows how to make all your problems at work go away. He also knows how to get your dream job and get promoted. Especially for professional creatives.

Who is Joel, you ask? He is EF Education First‘s Worldwide Creative Officer, and he recently shared his perspectives in the first installment of EF’s new “Education for Life” virtual learning series. His online talk, “The 5 Things Professional Creatives Need to Know,” was geared toward people who work in design and other creative fields. But, many of the lessons apply to anyone looking to build a successful and rewarding career.

Despite the title, Joel offered far more than five things, including useful nuggets for everyone from those looking for their first creative roles to executives managing global creative teams. Some highlights include:

Joel refers to this as “The Wall,” an invisible and ubiquitous barrier sitting in the middle of the typical creative career path. At first, people succeed based on their talents as individual designers, writers, videographers, and artists.

On the other side of The Wall — the side most junior creatives are taught to aspire to reach — success depends on their ability to inspire and guide others. Their medium becomes other people, and the distinction is critical for everyone who works in a creative field.

According to Joel, bad film directors tell actors how to read their lines. Great directors explain the character, the scene, and the backstory and let the actors do what they do best.

“You can’t give your designers or artists or other talent line readings,” Joel says. “If you’re giving feedback to your creative team, focus on the strategic reason that a change needs to be made, not the actual change or solution that you want because that’s their job.”

“Don’t be too eager to leave behind the tools that made you love what you are doing.”

Many creatives want to get promoted to the other side of The Wall so badly that they sacrifice what inspired them to pursue a creative career in the first place.

They reach for jobs they will not enjoy and are unlikely to succeed at simply because the system does not value individual contributors enough. This needs to be fixed.

“No” is common in the business world, but it is only a step on the way to “yes.”

When someone says “no” it means there is something you have not done yet. Recognizing this makes each “no” less painful and gives you control of your destiny.

As Joel says, “Knowing that you have the ability to turn a ‘no’ into a ‘yes’ keeps you calm. It allows you to stay creative, think logically, and solve those problems so that you can eventually get to yes.”

It’s a thin line between innovation and failure.

If you want to do something genuinely new and innovative, Joel believes, “the right feeling is that you’re slightly terrified that you’re going to fail and the whole thing is going to blow up. The problem with this, of course, is that that’s also exactly what actual failure feels like.” You have to take that chance if you want to learn and grow.

These might seem like harsh words from someone who oversees creative teams for a 55-year-old education organization with schools and offices in 50 countries. The point is that when you are a creative, your ideas always move faster than the company you work for can. You need to accept that if you want to thrive.

As for how to solve all your problems, get a job, and get promoted, let’s just say the answers come down to great work, patience, research, relationships, and doing the job you want. You didn’t think we’d give it all away here, did you?

Watch Joel’s full talk on YouTube now and follow EF on LinkedIn to stay in the loop for future installments of Education for Life.

J.J. is a freelance writer, storyteller, and marketing consultant who grew up in New York, went to school in Vermont, spent a winter in Idaho, and now calls Boston home. He craves variety, which may explain why he has been to every continent but Asia and [...]