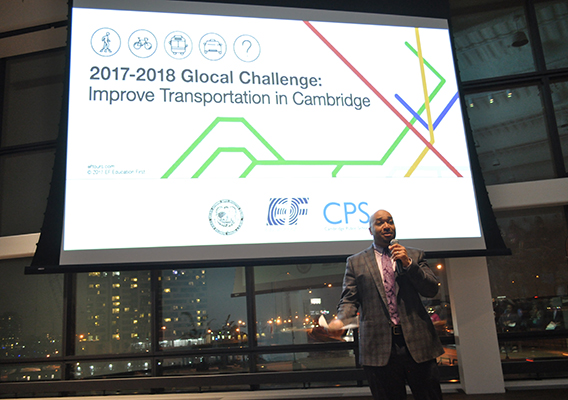 For those of us living in cities, public transportation is something we deal with regularly. This is particularly true for students who rely on public transit to get to and from school every day. The impact that transportation has on society made choosing the topic for the sixth annual EF Glocal Challenge at Cambridge Rindge and Latin High School (CRLS) easy.

EF Education First created the EF Glocal Challenge in 2012 in partnership with CRLS and the City of Cambridge to inspire students to develop solutions to the city’s biggest challenges. Glocal (global + local) is a first-of-its-kind public-private collaboration focused on improving students STEM skills while also positively impacting the local community. In years past, students covered topics like food sustainability and energy conservation, and in November 2017, they were challenged to improve transportation in Cambridge by 2020.

Over two months of competition, nearly 100 students worked in 20 teams to develop solutions to transportation challenges they see in their community every day. They attended workshops and were coached and mentored by local academics, practitioners and entrepreneurs, culminating with a student exhibition at EF’s North American headquarters on Wednesday, January 17th. A panel of judges then announced the five finalists, who took part in a pitch-off in front of a large audience of EF staff and local community members. The excitement in the room was palpable!

All five finalists won internships with the City of Cambridge as well as seed money to get their projects off the ground. Grand prize winners Live Bus and Transportation Transformers also received scholarships to attend the EF Global Leadership Summit in Berlin this July, which will focus on the future of technology.

Here are the innovative transportation ideas from the top five finalists:

As Public Relations Coordinator on the EF Central Brand team, Kaitlyn has the pleasure of sharing amazing travel, education, and lifestyle stories about EF with the public. When she’s not pitching media, she enjoys traveling and spending time with family [...]