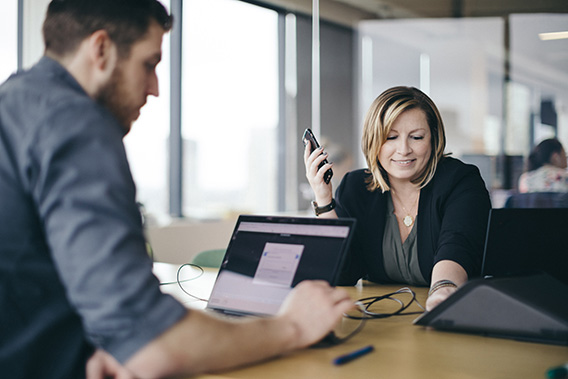 If you ask someone what they enjoy most about work, odds are you won’t hear “problems.” But just talk to Lillah, EF Education First’s Director of Tours IT. For her, problems are just puzzles waiting to be solved, and she’s spent years getting to the bottom of all sorts of issues—sometimes in places that took her by complete surprise.

“The best part of my job is making someone’s day better by either fixing a problem they’ve been struggling with, or releasing some cool new tech tools to make their job easier,” explains Lillah. And with 14 years at EF under her belt, Lillah’s had her fair share of success squashing software bugs and streamlining a slew of operational functions. So, it’s no surprise she’s had many roles in the company—some of them created on the spot as a result of her knack for identifying challenges and proactively working to solve them.

Looking at Lillah’s background, “Master Problem-Solver” isn’t something that jumps out at first glance. Instead, her talent developed naturally over time across different teams.

“I’ve had many different roles at EF,” she says. “But when I string them all together now it feels like a very easy progression.”

Lillah went to school for criminal justice and started her EF journey in Customer Service for EF Educational Tours, quickly becoming the team’s trusty “power-user,” reporting tech bugs and issues. That was just the beginning, though: She then became a Business Analyst in the same division and helped build Phoenix, one of EF’s internal software tools that supports customer interactions.

“I’ll always be proud of being part of the team that built Phoenix,” she says. “Even if my biggest contribution was just a pop-up screen!”

From there, troubleshooting and getting to the root of a problem became irresistible challenges. And with no previous background in IT, developing Phoenix came with its own rewards.

“That was the first time I could point to something concrete and say, ‘That was me!’” Lillah recalls.

But what came after is what she describes as her favorite EF moment: Lillah met her husband (who was a graphic designer at EF) just before heading off to Switzerland to take up a Business Analyst position in the EF Educational Tours Travel team.

“It was a classic EF love story,” she says, noting that she was moving to Lucerne around the time of their third conversation.

Living overseas was transformative in more ways than one.

“It’s the singular thing that’s had the greatest impact on both my career and my personal life,” Lillah says. “Being over there helped me sort through what was important, what I can control and what I can’t.”

A few years abroad was enough for her to realize she could continue her role in Boston, and EF Boston welcomed her back with open arms.

Lillah wasted no time identifying where things could be streamlined back at home. As Director of Tours IT, she puts her problem-solving skills to use daily, supporting tech needs across 10 EF offices. Her day-to-day work is highly collaborative: She’s constantly communicating with office management teams across time zones, creating training strategies, and coming up with new-and-improved methods of collaboration. Lillah also helps EFers understand how to use the tech that’s already in place.

“There are so many opportunities to help someone turn things around,” Lillah says. In fact, she says some of her proudest moments as a manager include seeing new energy in her team after a round of feedback.

“EF pushes me to constantly learn and improve as both a leader and a team member,” she says.

So, after a decade and a half of leading diverse teams in various roles, what does Lillah look for in new colleagues?

“People who aren’t afraid to get their hands dirty,” she says. “To crawl around under desks, plug stuff in and roll up their sleeves to get things done.”

Chris is an East Coast-born writer and translator who enjoys bright socks, creatures of the four-legged, tail-wagging variety, and blueberries. He comes from an Armenian and Greek family and speaks four languages. [...]