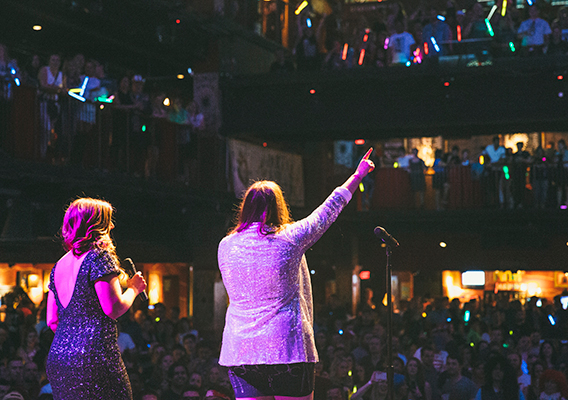 Bridget’s journey to EF Education First started in an ordinary office in South Boston. At the time, she was working as a customer service rep for a manufacturing facility—the youngest employee in her small office. She was feeling uninspired and in search of a new challenge or adventure, anything that would shake up her routine and add some excitement.

It was at that point she happened to travel on an EF Ultimate Break tour, which offers trips for anyone 18-29 looking to travel with like-minded, adventurous people. “I came back from that trip as a completely different person,” Bridget said. Two EF Education First employees were on tour with her, so she took that opportunity to pick their brains about what it was like to work at EF.

“I knew as soon as I got back I wanted to work here. I applied, applied, and kept applying until they hired me!” Bridget laughed. She knew she was in the right place when she walked into the Boston office in March of 2015—the lobby felt like one giant window.

While the atmosphere of Bridget’s new office was certainly an improvement, it was the opportunity to take a small idea and make it big that convinced her EF was the perfect fit. Bridget was the mastermind behind “EF’s Got Talent,” the company’s first-ever talent show featuring acts and performances by EF staff in Boston.

Bridget says the initial idea started small, a casual conversation among friends. “I was just sitting at my desk, talking to my coworkers around me. I’m super passionate about musicals and theatre, and they began talking about how they sang acapella, someone played saxophone, another said I’m looking for a band. I just got to thinking, ‘have we ever thought about having a competition for people in music or art?’” While EF has a number of activities focused on health and fitness, Bridget saw an opportunity to embrace the more creative folks at the office.

Bridget brought her idea to Office Management, who helped her take the idea and run with it. The idea evolved into “EF’s Got Talent,” and Bridget and the Office Management team ran it by the CEO for approval. He loved the idea so much, he wanted to make it the theme of the summer party

“I didn’t speak, which is saying something for me,” said Bridget. “When I heard Eddie [the CEO] tell staff that the theme of the summer party would be EF’s Got Talent, I started crying. There was so much buzz, everyone was talking about it—it was incredible.”

Prep for the big event took months. EF hosted open auditions, then closed ones, eventually narrowing the show down to 10 acts. Employees were told the show would be hosted at the historic House of Blues, putting the pressure on for each act. “I told them, ‘you are performing at one of the biggest venues in Boston. This is not a drill!’” Bridget said.

Bridget described the big day as “surreal.” “We were in that back stage of the House of Blues, where some of the biggest bands, some of my favorite bands, had been right where we were standing,” she said. “I was so excited!”

Bridget emceed the event with a colleague, and her excitement and passion for the event showed through with every introduction she made. “Walking out on stage in front of 1,500 of your coworkers was the coolest experience of my entire life. My team was yelling my name from the balcony. I never thought in a million years that an idea I had sitting at my desk would turn into this.”

Afterward, the feedback was nothing but positive. The show went off without a hitch, and staff loved being able to see the talent from their colleagues showcased in such a historic venue. From acapella and ukulele to modern dance performances, employees loved the variety of the acts and the sheer talent displayed by their colleagues. “I had tons of people approach me and say this was the best summer party they had ever been to,” Bridget said.

But Bridget’s excitement over the performance goes much deeper than that—it is the fact she was able to run with an idea, even though it wasn’t in her job description, that brings out her passion for working at EF.

“EF is a company that will back you up, the entrepreneurial spirit is something that’s really valued here,” she explained. “EF brings out the best in me.”

Bridget thinks EF can bring out the best in everyone who works here, but says you have to be willing to put in the effort. “Be ready to work really hard, but know that you will walk out of the office feeling fulfilled, every single day.”