The road to recovery through education in Nepal 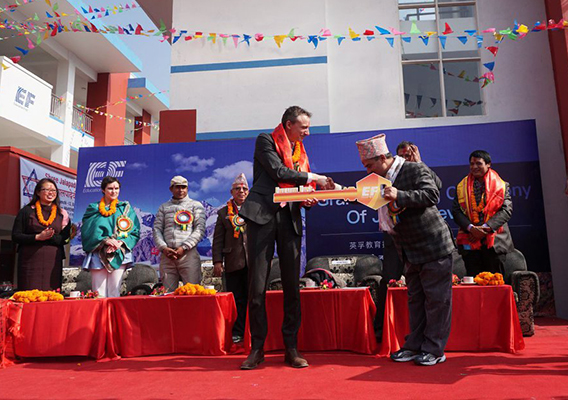 The April 2015 earthquake in Nepal was more than a natural disaster – it devastated an entire nation. The 8.1 magnitude quake left 9,000 dead and 22,000 injured, leaving entire villages flattened and hundreds of thousands homeless. In the wake of the destruction, homes, schools, hospitals, and infrastructure needed to be rebuilt.

That’s why EF Education First stepped in, under the umbrella of its EF Global Classroom Foundation—the company’s philanthropic arm whose goal is to aid in disaster relief and create better educational opportunities for those in need. The EF Global Classroom Foundation has assisted with disaster relief in the U.S., China, Haiti, Indonesia, and Japan while providing funding for better educational opportunities for under-served local communities. After the earthquake in Nepal, founder Bertil Hult knew that EF could help: building a school could assist in both the long-term recovery and future education for the children of Nepal.

“For EF, education is at the heart of what we believe,” explained Jacob Toren, CEO of EF China. “Opening the world through education is the center pillar of our philosophy and of everything we do. The reinstatement of education in a society where educational opportunities have been impacted is a commitment to long-term recovery and sustainable development.  That’s what we were hoping to achieve by launching this meaningful project in Nepal.”

The project got started by relocating a team of three EF employees to Nepal to begin searching for a location to build a school. Above all, EF wanted the school to serve communities that were least likely to benefit from the outpouring of international aid in the wake of the natural disaster. 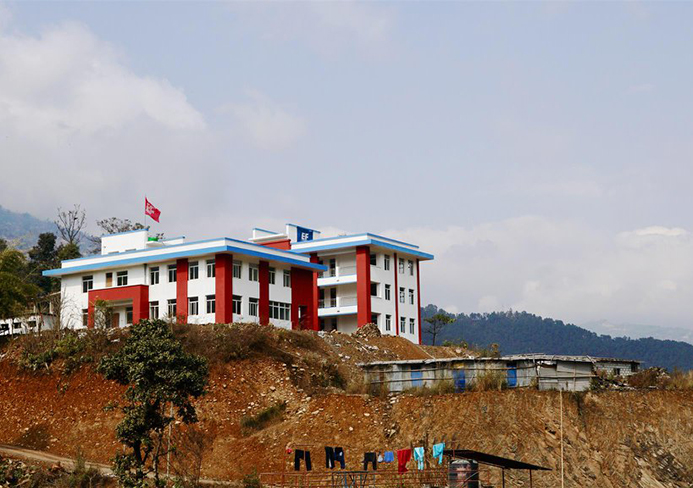 The team eventually chose Sindhupalchowk, an arduous three-hour drive from Nepal’s capital, Kathmandu. Sindhupalchowk was in an area hit hardest by the earthquake, and the dangerous road conditions and remote location made it difficult for NGOs to provide assistance. For EF, this was the perfect place to build a school.

“We originally planned to have the school built in one year,” said Hope Ma, EF’s project lead in Nepal. “It seemed simple, it’s only a three-story building.” But as with most construction projects, the team soon found that building a school from the ground up would be a bigger challenge than it looked.

“Working in underdeveloped countries is always difficult,” said Rakesh Hamal, Chariman of Safa Sunaulo Nepal (SSN), an NGO that operates in Nepal and that partnered with EF on the project. “Taking on an effort of this magnitude, right after the disaster, was a difficult and complicated thing to do. EF took quite a lot of initiative and made a great effort to find the school, and chose to rebuild in one of the most affected districts of the country.”

Construction challenges included adhering to Nepalese national building standards while maintaining the country’s traditional customs. At the same time, EF was committed to ensuring that the school would feature the highest standards of safety. The team implemented state-of-the-art earthquake resistant technology called Super Reinforcement with Flexibility (SRF), which has been used in only two countries outside of Nepal: Japan and Korea. EF hired a Japanese agency to help create a unique design that would meet Nepalese building codes while also being able to withstand high-magnitude earthquakes through the use of SRF technology.

The building took three years to complete, but in the end, EF proved once again that nothing is impossible. “We have conquered the challenges of bringing the most advanced aseismic construction technology from abroad and applying it with local construction teams in a rural area,” said Toren. “Thanks to our cooperation and efforts, thousands of students will have access to high quality education in safe premises inside this building for many years to come.” The EF Nepal Jalapadevi School officially opened its doors in Kathmandu on January 29, 2018. Former Prime Minister of Nepal, Madhav Kumar, was in attendance, and EF was presented with the Award for Outstanding Contribution to Post-Earthquake Construction by Prime Minister Sher Bahadur Deuba and Vice President Nanda Bahadur Pun. During the ceremony, the former Prime Minister expressed that the grand opening symbolized an opportunity to prioritize the role of education in Nepal and spoke to the impact that improving education would have on the long-term development of the country.

The school will welcome up to 800 students between the ages of 4 and 18 and will be the first of its size to be completed since the earthquake. An adjacent two-story multi-purpose building can accommodate 200 people, and will offer a library, canteen, teacher offices, and a dormitory. Both buildings can also serve as local shelters in the event of another disaster.

“Handing over this school marks the completion of EF’s Nepal project, but in no way does it signify the end of our commitment and support,” said Toren. “Starting this August, we are launching a program for EF teachers to volunteer and regularly contribute to the enhancement of English education in this school and its surrounding areas.”

Best of all, the school will continue to grow and empower students in the Sindhupalchowk community, educating thousands in the years to come.

“Whatever the future may bring,” said Toren.  “As long as we have faith and courage, as long as we work hand-in-hand, and as long as we commit to education, we help in making the world more beautiful.”