This Nobel Week, EF looks to Laureates to teach perseverance and grit 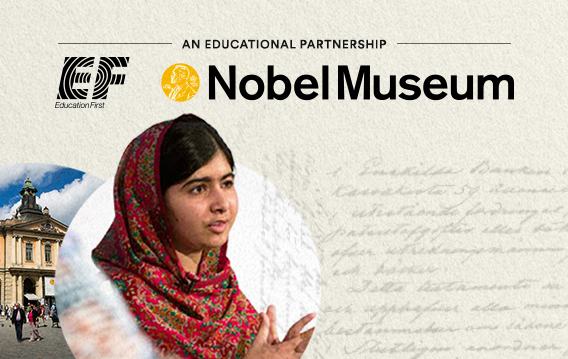 Each year in early December, the newest Nobel Prize Laureates gather (remotely, in 2020) for Nobel Week, a celebration of their incredible advancements in the fields of physics, chemistry, peace and physiology or medicine. These pioneers have spent much of their lives, often against great odds, working toward achievements that have contributed enormous benefit to humankind. Their stories of triumph serve as inspiration for us all, so as teachers seek new ways to teach resiliency and help students see the greatness in themselves, we’re looking back on nearly six years of educational partnership with our friends at the Nobel Prize Museum and our joint work to inspire students to think boldly about how they can impact the world.

Resources to teach resiliency and confidence

The Nobel Prize Museum focuses on the most significant issues of our time and demonstrates how we can respond to them through science, humanism and cooperation. Our partnership’s cornerstone is a free textbook we co-authored called “Nobel Journeys,” which looks at the various paths Nobel Laureates have taken on their roads to success. Each story focuses on important moments of discovery in the Laureates’ lives. It stresses that there is no one clear path to success, that you can learn more from obstacles than you can “easy wins,” and that you can find inspiration in the most unexpected places. 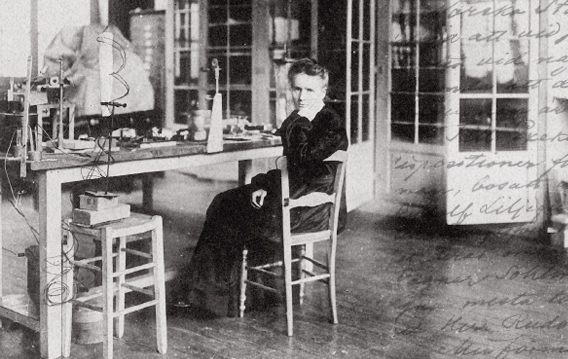 The “Nobel Journeys” textbook shares 10 Nobel Laureates’ inspiring stories, including that of Marie Curie, a trailblazer in the field of radioactivity, to inspire students to make their own marks on the world.

For example, Marie Curie, a pioneer in the field of radioactivity, was the first woman to receive a Nobel Prize in physics and the first person to be honored with two Nobel Prizes, in physics and chemistry. Curie was barred from attending her local university because of her gender, so she and her elder sister took turns supporting one other financially as they each studied at Paris’s Sorbonne. Curie went on to discover several elements and explore their radioactivity; develop mobile radiography vehicles that could X-ray injured soldiers on World War I’s battlefields; and head an academic institute that would one day bear her name and foster four more Nobel Laureates.

Educators looking for ways to teach resiliency and impact – both timely topics during the pandemic – may find the book’s teaching guide a helpful resource; the handy supplement offers discussion questions, additional readings and ideas for activities aligned with the book’s content.

“In the spirit of the Nobel Prize, we believe your ideas and words matter, not your gender, background or the color of your skin,” said Carin Klaesson, Curator of the Nobel Prize Museum. “While there’s some celebrity associated with winning a Nobel Prize, we want everyone, especially younger generations, to understand that it takes hard work and a lot of determination to achieve great things. Part of our work at the Museum is to help tomorrow’s pioneers understand that failure is a key piece of education, that there is no one recipe for creativity, and that global citizenship is key to creating new perspectives.”

Putting student solutions to the test

The Nobel Prize Museum also participates in the annual EF Global Leadership Summits, where we welcome students from around the world and ask them to develop groundbreaking solutions to pressing global challenges. The prize? It’s a pretty big deal: The students who win the Summit’s annual challenge have their works exhibited right next to those of Nobel Prize winners in the Nobel Prize Museum. In fact, EF student travelers are the only people other than the Laureates themselves to have their work displayed at the world-renowned Museum. 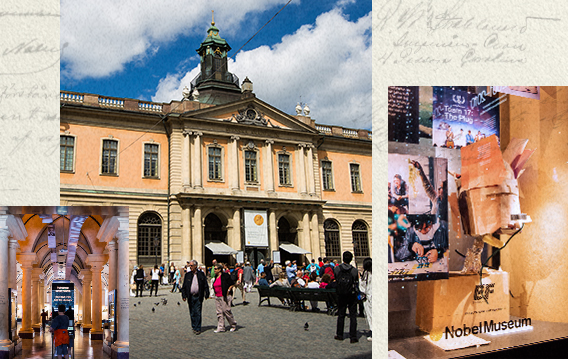 The Nobel Prize Museum in Stockholm, Sweden, showcases the discoveries and creativity of the Nobel Laureates, as well as the ideas of innovative EF Global Leadership Summit participants.

“When students are challenged to do what’s hard, they practice grit and tenacity as they develop new ways of thinking,” said Emily Harburg, a director at EF who manages the Nobel Prize Museum partnership. “No one demonstrates this better than the Nobel Foundation, its namesake museum and the Laureates who have contributed so much to humankind. It’s our hope that, by educating today’s students on the nonlinear paths and various obstacles so many Laureates have overcome, they will be inspired to discover their own resiliency and explore the mark they themselves are capable of leaving on the world.” 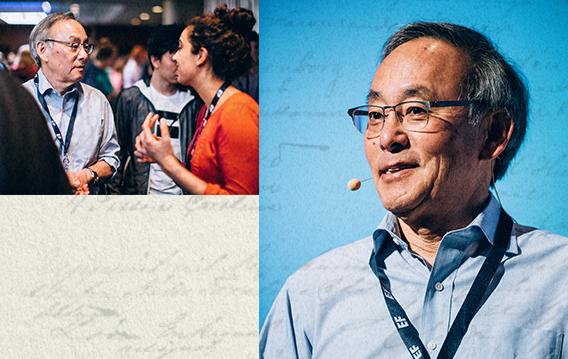 Steven Chu meets with students at the 2016 EF Global Leadership Summit in Iceland. Chu served as the United States Secretary of Energy from 2009-2013 and shared the 1997 Nobel Prize in physics.

When students learn about groundbreaking achievements and the incredible stories of the people who made them possible, it becomes easier to see there are many roads to education and achievement. By opening their eyes to the obstacles these Laureates have overcome, today’s students can become inspired to chart their own paths, transform challenges into opportunities and see for themselves that greatness truly can be within reach for everyone.

Jamie is a Boston-based writer and public relations manager. When she isn’t out exploring her native New England, she’s planning her next international adventure, whether it’s hiking Israel’s Masada at sunrise, eating tapas in Spain, watching the Tour de [...]

Beyond the rainbow: Reflecting on pride and intersectionality in the workplace
By Will Genova 2 min read
Meet the EF Boston office: The top things you should know about living and working in...
By Sarah Crawford 7 min read
Look inside the newest EF office in Austin, Texas
By Sarah Crawford 2 min read