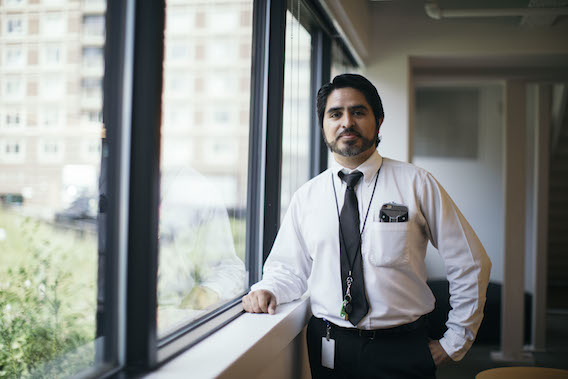 Henry is typically one of the first faces people see when they walk into EF Education First’s Boston headquarters. Whether they’re coming in for a first interview or starting another day’s work, for the past 18 years, he’s been a consistent, friendly presence guarding the safety and well-being of everyone who comes through EF’s doors. During those years, he’s seen a lot and learned even more. For him, working at EF feels more like a journey than a job.

Born in Guatemala City, Henry is the son of activists who found political asylum in the U.S. He spent the majority of his childhood in East Boston, which still holds a huge piece of his heart. In his high school years, he taught lifeguarding courses at the Hull Lifesaving Museum and had aspirations to become an auto mechanic. (To say he’s passionate about cars would be an understatement.) As he prepared to graduate, he eyed positions as a security guard, hoping he’d be able to study for school on the job. He interviewed with one of Boston’s premier security placement agencies, which sent him to interview somewhere he’d never heard of before: EF.

“I interviewed with Bert, Director of Facilities, which was very intimidating to me,” remembers Henry, who was brand new to security at the time. “I was so nervous, but he saw something in me. We clicked right away. He offered me a position and the rest is history.”

Over the course of two decades, Henry has come to view Bert as more than a manager; he’s been a mentor and father figure. Everything he learned about the world of security, he learned from Bert. And according to Henry, every day of every year at EF, there’s something new to discover.

“Security wasn’t originally what I planned to be my career focus, but I saw brilliance in Bert,” says Henry, who’s grown from a teenager to a proud father of three while working at EF. “He’s been my schooling in this realm. In 18 years, I’ve never stopped learning. There’s a constant flow of information all around me and it drives my curiosity to know what’s next. How could I ever be bored when there’s so much happening all the time?”

Today, as Security Manager, Henry serves as a liaison between EF and its security subcontractors. As the reference point for security guards across all buildings on EF’s Boston campus, he spearheads the hiring and training process for new staff. He also does a lot of things most people don’t know about. Alongside Bert, he purchases, sells and maintains all company vehicles. The best part of his job, though? The people.

This spirit of community and fun has underscored some of Henry’s favorite EF memories, from shaking hands with the Queen of Sweden to building bikes for kids alongside thousands of EFers in Denver and watching the New England Patriots strut their stuff at an EF-hosted fashion show. (Yes, that really happened and there are pictures to prove it.) Truly, after all these years with EF, nothing seems to surprise Henry.

“EF has this je ne sais quoi quality about it. You have to be here to understand it,” he says. “It resonates through the languages spoken in our hallways. It’s seen in the faces, cultures and creeds that fill our beautiful offices all over the world. It’s a spirit that not only changes you as a person but also inspires you to be better at all that you do. Every day, I’m inspired to continue growing as a professional and as a person.”