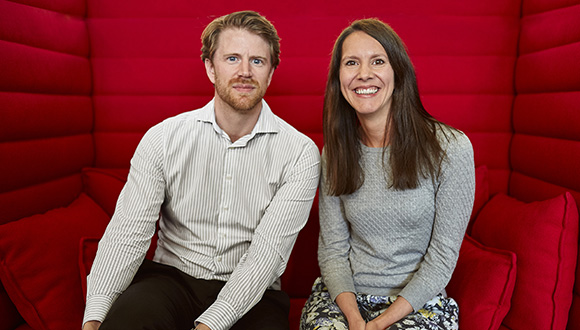 Friends who study together, stay together. Stefanie and Mark met at the University of Bristol in the U.K. and have been good friends ever since. While they both initially worked in London after graduation, Stefanie and Mark soon ended up on different continents—Mark moved to New York, and Stefanie moved to China to begin work for EF Education First.

They kept in touch during their time apart, and as luck would have it, they both ended up in Zurich a few years later—Stefanie with EF, and Mark with his new wife. When a position opened up with the finance team in Zurich, Stefanie was quick to recommend Mark for the job. Mark took Stefanie up on her recommendation to interview at EF, and soon discovered it was a match made in heaven. We asked Stef how she knew Mark should make EF his new home.

Q: How did you know Mark was the right fit for EF?
A: Mark is great, so it was simple! As well as being a super clever guy with a wealth of professional experience to bring to EF, I knew his personality would fit perfectly: he’s passionate, hard-working, has an amazing sense of humour, and is very sociable. Having studied languages and lived abroad several times, I also knew that Mark would not only understand EF’s mission, but he’d be a champion for it.

Q: What is your best EF memory with Mark?
A: It was the Zurich Christmas party shortly after he joined EF. I had this moment when we met for pre-drinks, and I suddenly realized that two important parts of my life had merged: it was both surreal and brilliant to be at a work social event with such a close friend from way back.

Q: What EF core value does Mark display most?
A: I was going to say attention to detail, since he’s a trained accountant. But actually, I think it’s his ‘nothing is impossible’ attitude. Mark is someone who just makes things happen, and he does it with a calm unfazed confidence.

Q: How does Mark make EF a better place to work?
A: Mark has an amazing ability to put people at ease. He is fun to be around, but also really dependable: he will always help you out when he can.

Q: What’s your favorite thing about working at EF?
A: So many things! I really enjoy the variety of the work and the ownership you are given. But most of all I have to say it’s the people. I have never worked anywhere before with so many great people. I think the difference is that everyone truly loves what they do here. And people are kind: most will go out of their way to help you.

Q: What’s a key piece of advice you would give to a new EFer?
A: You will probably find that EF is quite different from any other place you’ve worked before. Embrace it, go with the flow, and work hard. You will absolutely get out what you put in, and then some!

Think your best friend could be your EF Friend Forever? Visit careers.ef.com