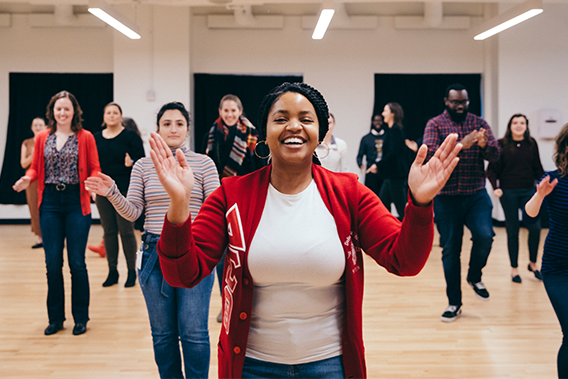 When Leslie moved from New York to Massachusetts in 2017, she realized she needed a change.

Having worked in retail, she knew she loved building teams and working with people. So, when she came across a role online for the Benefits team at EF Education First in Boston – she went for it.

“I hadn’t heard of EF before,” she admitted. “But hearing the Benefits team describe their love for the company during my interview made me want to land the job more than I thought I could even want a job.”

Needless to say, she nailed it.

Excited for the next step in her life and career, Leslie soon immersed herself into the world of EF.

“The first month was a little nerve wracking,” she said. “It’s that mentality at EF. You just have to go after your tasks and advocate for yourself. That entrepreneurial spirit is such a huge part of who we are, and it took me some time to adjust to it.” 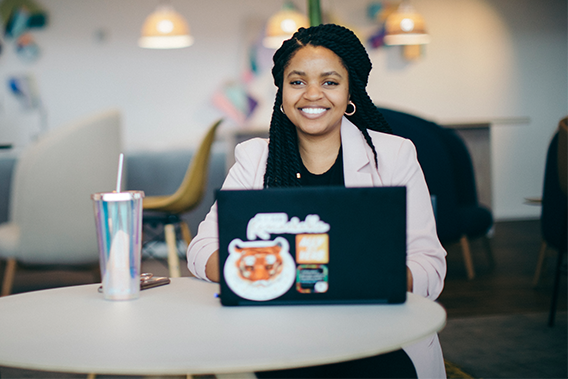 Soon she took on huge projects like EF’s employee commuter program and on-boarding new hires from across the country and the world.

“The best part of my job is the people,” she said. “I love having a role that allows me to interact with new hires, current employees and product heads. I also get to learn so much on the job. Employees sometimes come to us with unique issues, and it’s our job to help them – whether we know how to in the moment or not.”

With some experience under her belt and newly gained confidence, Leslie was inspired to grow her network within EF. “I learned early on that people won’t say no to you,” she said. “You can reach out to a VP or a product President and ask them to get coffee, and they’ll always say yes. It may not be that week or that month, but they’ll always make the time for you.”

Leslie grew exponentially as she fostered a sense of community throughout EF’s North American Headquarters. So when she soon had a one on one with her manager, Leslie was open when asked how she’d been liking EF so far.

“I hesitated a little,” she said. “But then I told him that I didn’t always feel comfortable at such a homogeneous office. He agreed with me, and asked what I thought we could do about it. That conversation charged me up and ignited my passion for diversity and inclusion at EF.”

Galvanized and ready to make an impact, Leslie began casually grabbing coffee with other black EF employees on a bi-weekly basis in efforts to create space for others to connect, network and feel empowered.

“It was a safe space for all of us that we needed here. I would recruit new people as time went on and that later morphed into the Black History Month committee. I led a team that put together bias workshops, a step class and other events. I wanted to give us a platform to make our voices heard and our experiences visible.”

Leslie also became captain of Black at EF, an affinity group for EF staff  whose goal is to share African Diaspora culture with employees through internal events and programming. 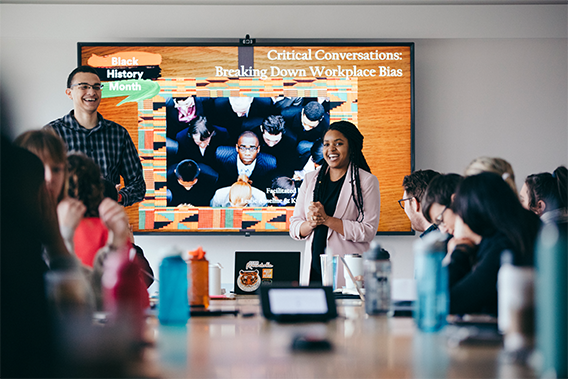 Today, Leslie works as a People and Data Specialist where she does everything from in-depth analytics reporting and data requests to completely revamping EF’s internal human resources portal.

She also continues to lead weekly on-boarding sessions where she informs and answers questions from new hires about their benefits along with being one of the first friendly faces new staff meet when they begin their own EF journey.

“Working at EF has helped me to understand the power that I have,” she said. “I work for a company that has been thriving for 55 years, but my ideas and my input still matter. This may not be my company, but I am still working to leave my mark here.”

Rob Rigo is a digital content creator and social media savant with a hunger to explore. When he’s not online you can find him hiking in the White Mountains of New Hampshire, lollygagging in the nearest art museum, or laughing at his own jokes. [...]