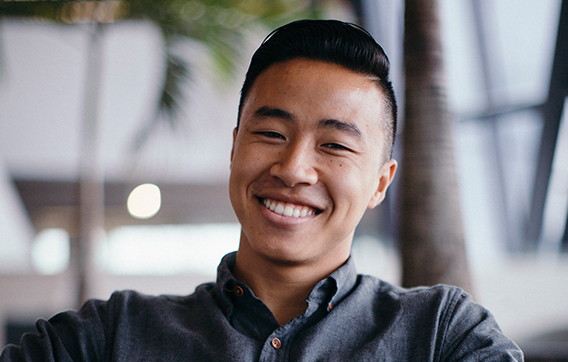 Before his senior year of college, Hue had never left California. Well, not that he remembers. His parents emigrated to a suburb just outside of Los Angeles from Vietnam when Hue was only two years old. Throughout his youth in the sunny foothills of mountains just minutes from a vibrant city, his parents worked hard to instill the importance of education in him and his older brother and sister.

“My siblings and I are all first-generation college students,” Hue says. “I’m really passionate about education spaces and how we can expand them to give opportunities to more people.”

As a student at the University of California, San Diego, Hue was an accomplished student but uncertain of how his management science major would translate into a profession. “A lot of my friends were going into consulting and banking,” Hue remembers. “I wondered, how do people decide?” Soon enough, a decision would come in the form of a life-altering phone call. At the time, Hue’s brother Minh worked at EF Education First in the Hong Kong office. On a work trip to Boston, Minh asked colleagues about a summer internship for Hue. Amy, the Vice President of Recruitment and Employee Development, didn’t have a specific available role at the time but offered to give Hue a call.

“Given Hue’s personality, I knew that he’d fit in perfectly with EF’s passionate and dynamic culture,” said Minh.

“Amy was amazing,” says Hue. “She got on the phone with me and said, ‘Tell me who you are and what you want to do.’ I couldn’t believe that this person who barely knew me wanted to help,” he remembers. After that one phone call, Amy connected Hue with another Amy, an Executive Vice President, who instantly offered him an internship on the Brand Team that coming summer. And for the first time, Hue left California.

He stayed with a relative that summer, commuting over an hour each way on the Green Line to EF’s office. He remembers his time working with Amy to build brand awareness in Boston fondly – his days ranged from working on marketing campaigns to putting up flyers in coffee shops, writing and scheduling tweets, and organizing movie nights.

“It was so fun! Amy was so busy; she couldn’t hold my hand. The biggest skill I learned was a ‘figure it out’ mentality. Amy taught me to be one step ahead of her. She really gave me a fundamental skill set that kicked off my career,” Hue says. 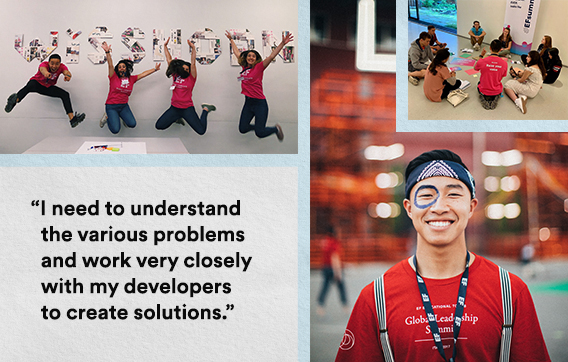 Back in San Diego, Hue finished up his senior year of college with two more transformative opportunities just ahead on the horizon. The first was that his brother bought him a plane ticket to Hong Kong as a graduation gift, which kicked off his lifelong love of traveling. The second was that he was accepted as an EF 360 Global Management Trainee, paired with Matthew, the Executive Vice President of Creative and Marketing for Tours at the time.

Excitedly boarding the plane back to Boston that fall, Hue could finally see a clearer image of his future. But he had no idea just how far he would go, not only in the company but in the world.

“Matthew took the time to really understand my experiences, what challenged me, and what motivated me. I learned that I enjoyed working with the user experience team.” Hue continues, “Three months before I ended the program, Matthew sat me down and asked me to write my own job description. He let me craft my role, which became my full-time job as a User Experience Analyst. The 360 program was such a privilege, and I’m so grateful for the experience. Today, I think about how I can take that access, that opportunity, and that network and make an actual impact on the organization – no matter what role I have,” he says.

One way in which Hue gives back is to act as a mentor to high school students as a coach at the EF Global Leadership Summits. “This is one of my favorite things that EF does,” he says. “Being an educator is my dream, but there is so much I need to learn about life first. Summit gave me the opportunity to get a taste for what it would be like,” he says.

“One year, I had a student who was frustrated because the group wasn’t listening to his ideas. I sat down with him and said, ‘I love your passion but at the end of the day, what we want you to learn here is not just the solution but all the soft skills you’ll gain working with new people. How can you become a leader?” And at our next session, instead of pushing his idea, he took a leadership position and started coordinating and delegating.”

“At the end of the Summit, that student wrote an evaluation saying I was one of their favorite parts of the trip. I was done. One student was all it took,” he says. “But there are so many moments and growth opportunities that happen with the EF Global Leadership Summit experience. I feel very lucky to have been a part of it for the past four years,” he says. Today, Hue works in the EF Zurich office as a Product Manager for Tours Engineering, where he sits at the intersection of creativity and information. “At its essence, my role is storytelling. We have so much data today, and I need to figure out how to best utilize it. My job is to understand the different perspectives from designers, the technical team, operations, sales, marketing, and our customers and bring all those viewpoints together to tell a story,” Hue says.

“I work really closely with the people who craft the experiences. It’s our job to figure out how to deliver the products, to bring what we’re selling and marketing to life. I need to understand the various problems and work very closely with my developers to create solutions. How do we make informed data-guided decisions? Not data-driven because this company was built a lot on gut and smart senses, and we should lean into that. So how do we use information to make decisions that we believe in? That’s the conversation my team is helping to create,” he explains.

As Hue continues to drive solutions for the company, he looks back at the people who have supported him along the way; his cohorts from the 360 program who remain his lifelong friends, and both Amy’s and Matthew, his mentors who helped kick-start his career. “I think about the people at EF who saw something in me that they really believed in, and I want to model myself after them,” Hue says.

And of course, his first advocate, his brother, who showed him the world and what he was capable of. “It was my brother who pushed the limits for my family and me. After I visited him in Hong Kong, the travel bug bit me. He’s contagious. He made my whole family want to travel. And now it’s just a part of our life,” he says. 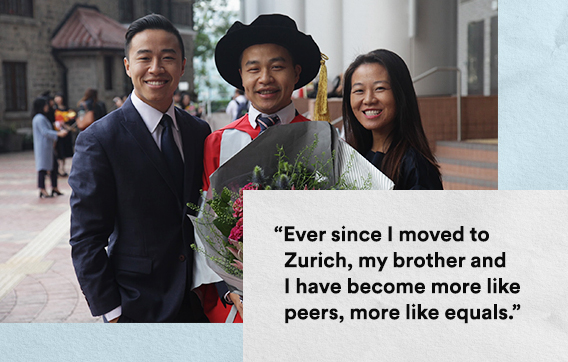 Hue’s brother left EF to become the Executive Director of a new school in Hong Kong, but he remains closely connected to the EF community and his little brother. “Ever since I moved to Zurich, my brother and I have become more like peers,” Hue says. “Now that I’m an adult making my own decisions and my own mistakes and learning from my environment, we talk a lot and give each other advice.”

The bond Hue shares with his siblings and his family will keep them all connected this holiday season, even though they won’t be gathering together. Hue’s father is still in Los Angeles, and his sister now lives in Japan with her husband, who’s a Marine. She recently stepped away from her teaching job to raise their one-year-old and prepare for their second child on the way.

So, although his nuclear family remains scattered across the globe, Hue will be spending the winter with friends and his newly formed family of colleagues, who are so much more than coworkers, in Zurich.

“We all have a bubble,” Hue says. “There are moments in life that push your bubble. College pushed my bubble out of Los Angeles, and my brother and working at EF expanded my bubble to the world.”

A Boston-based journalist, Abby previously worked as the Editor-in-Chief of Boston Common magazine and as the lifestyle editor at Boston Magazine. A huge fan of islands, Abby counts Greece and Cuba among her favorite destinations, and dreams about retirin [...]