Hub on Wheels 2019: EF staff come together for a good cause 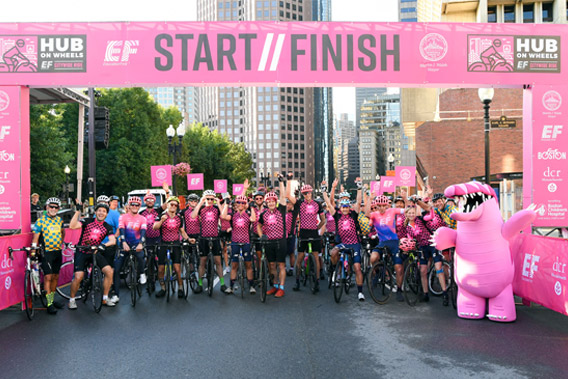 Thousands of cyclists, a celebration of all things Boston and plenty of EF Hello Pink–they were all part of the 15th annual Hub on Wheels, which took place Sunday, Sept. 15, 2019. 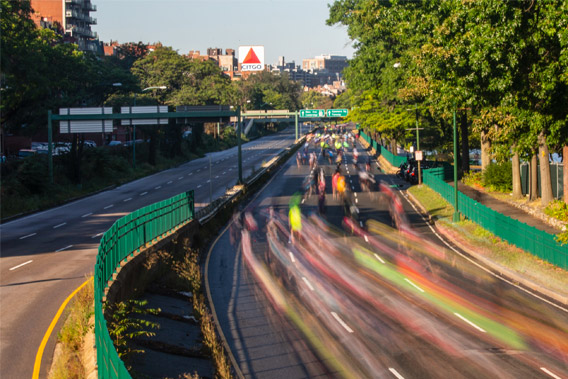 Hosted by the City of Boston and Mayor Martin J. Walsh, and sponsored by EF Education First, Hub on Wheels is Boston’s largest annual citywide bike ride. This year, more than 4,000 people of all ages, including 53 EF Hope Riders, took to the neighborhoods of Boston on two wheels to explore “the Hub,” experience a rare car-free Storrow Drive and raise money for pediatric cancer research at Boston Children’s Hospital (the event’s philanthropic beneficiary). Hub on Wheels also features a post-ride festival on Boston’s City Hall Plaza with food, drink, kids’ activities and more. 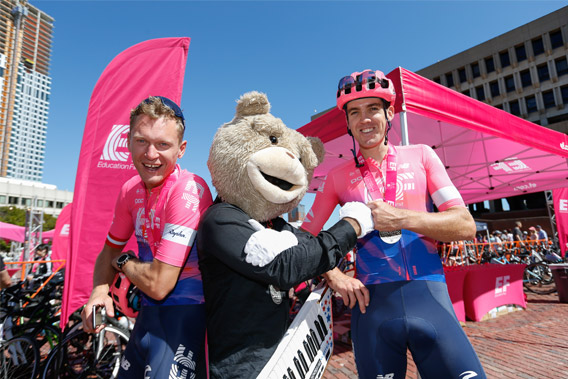 President of EF Pro Cycling Mary Wittenberg helped kick off the event, highlighting all the progress Boston has made in establishing new biking infrastructure and using cycling to connect people across diverse neighborhoods. It’s a push that links directly back to EF, which aims to connect people across borders and cultures and help them access new opportunities. Beyond the bikers, 35 EF staff members volunteered at the ride and post-ride festival, tackling everything from set up to bike valet parking to kid-zone entertainment. There were even much-loved appearances from EF mascot Argyle the Crocodile and iconic Boston busker Keytar Bear.

A portion of every rider registration fee went toward Boston Children’s, but Hope Riders do additional fundraising for the hospital. Meet a few of the EF staff members who rode as Hope Riders and learn more about why they ride in Hub on Wheels: 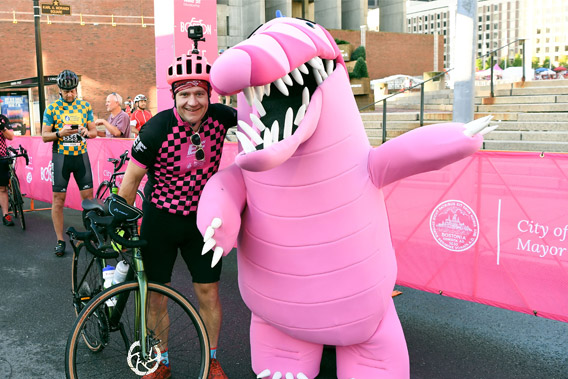 Mike with Argyle the Crocodile

Why Mike rides in Hub on Wheels: Mike is the captain of the EF Hope Riders and a cancer survivor. In the spring of 2015, he was out for a jog when he felt a pain in his right knee. After resting and stretching didn’t help, Mike went to the doctor where he was told he had cancer and might lose his leg. Nine chemotherapy sessions and 20 days of radiation later, he was officially deemed in remission. While he managed to avoid surgery, he was told he could no longer participate in impact sports, so his parents bought him a bike. Once he finished treatment, he hit the streets on two wheels and hasn’t looked back. Knowing firsthand how difficult cancer treatment can be, Mike rides in Hub on Wheels in hopes that he can help kids understand there is a future for them and they should always hold onto hope. 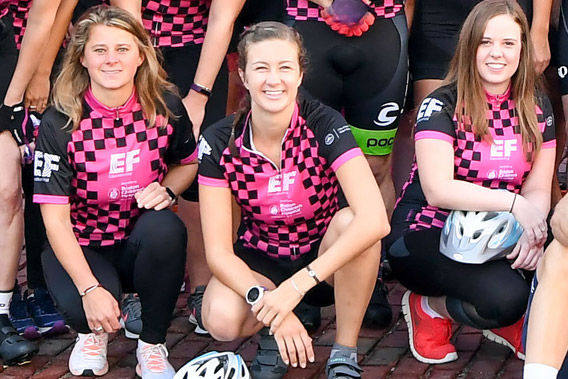 Why Lexi rides in Hub on Wheels: Lexi is mostly a recreational cyclist but does a few organized rides each year. She wants to give back to the community in some small way by riding with other passionate people and bringing lots of positive vibes to everything she does. Lexi’s cousin has special needs. During his first year of life he was in and out of Boston Children’s and her aunt credits the hospital for helping him through that time. He’s now 28 years old and living a full life. Beyond that, Lexi’s grandmother is now in remission from breast cancer, so she rides in Hub on Wheels to support cancer research and to give back based on her family’s connection to Boston Children’s. 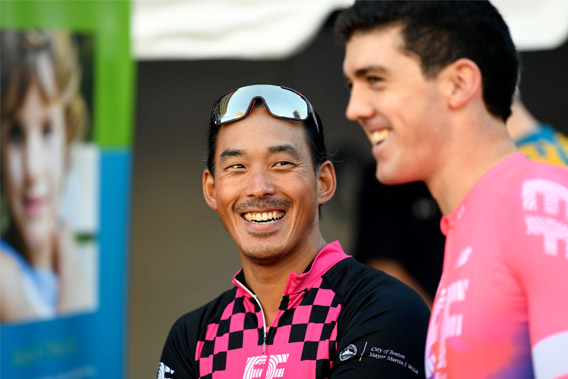 Why Frank rides in Hub on Wheels: Until several months ago, Frank’s connection to Boston Children’s Hospital was largely through friends or former colleagues and their children. But his son was recently diagnosed with a mild form of pediatric epilepsy, and he says the doctors and staff at Boston Children’s have been amazing in crafting his son’s medical plan. Frank has participated in cycling races since he was in middle school and now jumps into a few rides a year. In addition to supporting Boston Children’s, Frank rides in Hub on Wheels to help promote a love of cycling, and to ensure the EF Education First Pro Cycling team continues to build a strong presence in greater Boston where EF has its North American headquarters.